Day 3: VIC FALLS FROM THE DARK SIDE

At 8:30am, we left Chanter’s Lodge after breakfast for a medical clinic in an attempt to try to get the Yellow Fever Certificate. I said attempt because today was a national holiday in Zambia (which coincidentally happened to be Memorial Day back in the States).

After spending an hour catching various taxis going from one end of the town to another (paying as we went) and then visiting the home of a doctor, our efforts were in vain.

Still, it was quite an experience looking at the state of these medical clinics and how long the queues were, which mostly consisted of mothers and sick children or infants. I couldn’t imagine spending a national holiday in the hospital like this.

Anyways, by 9:45am, we caught a taxi to the Zambian border. From there, the moment of truth was upon us.

Obviously fearful of the unpredictability of the degenerating political situation of Zimbabwe thanks to Robert Mugabe, we considered not going to the Zim side. But being denied of seeing most of Vic Falls from this side was a real shame, and we decided that we couldn’t keep ourselves from crossing over.

It’s a shame that the election between Mugabe and Morgan Tsvangirai was probably rigged with Mugabe-controlled militia and police using force to beat people who didn’t vote for Mugabe. Plus, the runoff election was announced before the vote tally was made, so it was pretty obvious the vote counting was rigged (it was delayed by over a month).

Anyways, we really had to weigh on whether to pay the Visas and park entrance fees to get into the Zim side, which meant adding to the coffers of the corrupt Mugabe regime. We felt really bad for the Zimbabweans who once laughed at Zambia with their superior economics and infrastructure, but now have become the laughingstock as their economy has completely collapsed.

We commenced our walk to the Livingstone Bridge in earnest. And not surprisingly, some people near the bridge started following us and pushing their wares on us. It was really getting annoying at this point because we weren’t allowed to enjoy the falls in peace for even a second!

The falls were quite scenic from the bridge, but the mist from the falls kind of obscured most of the photo ops.

Looking down from the bridge, we could see the turbulent river swirling and swishing. That must’ve been the Boiling Pots. Julie tried to assure me that we didn’t miss out on much by not making it to its edge yesterday morning.

The mist was wafting so high and the water was so plentiful that the falls created its own rain on a neighboring cliff resulting in a rather unusual waterfall – one fed solely on the mist of Victoria Falls!

As we hastily made our way across the misty Livingstone Memorial Bridge trying to ignore the peddlers who wouldn’t leave us alone, Julie alerted me to a rather unusual scene in front of us.

Two giant baboons were frantically running across the bridge towards us and it seemed like we were in the way.

But before they got real close to us, they apparently chased a couple of locals on the other side of the bridge before running right past us. I was way too much in shock to react in time to get out my camera to take a photo of the scene (until after they passed us), but there was a third baboon climbing on a neighboring bush on the Zim side of the bridge, which I did manage to photograph.

After crossing the bridge and passing by a guard armed with a semi-automatic weapon, we next walked perhaps another kilometer or so on a road between the Zim border post and the Livingstone Bridge

Julie was worried for her safety at this point and kept walking quickly with heads down trying hard to ignore more peddlers and now beggars. I had trouble ignoring the beggars, especially since I felt real bad for the Zimbabweans who can’t even buy a loaf of broad for over a million Zimbabwean Dollars.

Anyways, we managed to finally get to the border post where we showed our passports, paid the fairly reasonably $30USD Visa, and continued a short distance further to the Victoria Falls park entrance where another $20 entry fee per person was collected.

And by 10:30am, we were finally away from the dodgy main road and into the relative peace of the falls – from the dark side.

It was clear that tourism on this side of the falls clearly suffered as it was much much quieter here than on the Zambia side. And that was too bad because it turned out that the Zim side seemed to have more viewpoints and perhaps better views than from the Zam side.

And although the vast majority of the viewpoints were literally a misty mess where you couldn’t see anything except a shower of mist and rain, the experience was extensive enough and the views good enough that we started to reconsider our debate of whether Vic Falls is better than Iguazu Falls.

We had close views of the thunderous Devil’s Cataract, saw where the infamous Devil’s Pool was supposed to be (no way you’d be hanging over the edge of the falls this time of the year – for sure!), plus saw what we could of the named components of the falls such as Horseshoe Falls and Rainbow Falls, and even stood bravely on the seriously drenched Danger Point. It was a useless act to take the camera out of the relative safety of the poncho cover.

At the very end of the walk, we saw bungy jumpers thrilling themselves by launching off the Livingstone Bridge and plunging towards the turbulent Zambezi River below. From our vantage point, we could see very satisfying rainbows decorating the adrenaline-junkie scene.

After having our fill of the falls, we walked back to the entrance, but not before seeing a few more monkeys and baboons making appearances on the trail.

As we left the park at around 1:20pm, we had to re-enter the main road and the awaiting peddlers and beggars. Once again, we walked with determined haste trying to ignore everyone and get back to at least the Zimbabwe border patrol as quickly as possible.

I guess we can now see another reason why people are so reluctant to cross over the bridge to see the falls from the opposite side.

Anyways after getting the passport control formalities out of the way, we continued onwards to the long march to the Livingstone Bridge still ignoring the persistent beggars and peddlers. One step at a time, one goal at a time.

Indeed this hasty march to the border reminded me of the Mogadishu Mile scene from the movie “Black Hawk Down” where anything can happen as we walked vulnerably through a gauntlet of sketchy and unpredictable people.

One person pushing a taxi ride back to Livingstone actually followed us from the Zim border all the way to the other side of the bridge at the Zam border.

After getting our re-entry Visas presented along with our passports, we were finally officially back on the Zambia side.

And that persistent taxi salesguy’s tactic apparently worked because we ended up taking his taxi back to Chanter’s Lodge at the recommended $10USD.

At about 1:45pm, we were finally back at the lodge. We spent the rest of the afternoon chilling out knowing that we were finally able to do Victoria Falls just about every way you possibly can.

Of course our enthusiasm was still curbed with the persistent Yellow Fever Certificate concerns. Still, there was nothing we could do at this point and we could only hope that something positive happens when we do the Zambia Waterfall Safari commencing from Lusaka tomorrow. 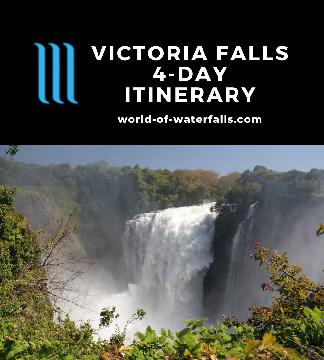