Day 2: OF GODS AND ROYALTY

Given the restful sleep last night (because we slept early as there really wasn’t much to do in the park), we didn’t have any trouble waking up early. In fact, we woke up so early that we were able to drive out to Inspiration Point before 6am as we were waiting for the sun to come up.

It turned out that the sunrise wasn’t anything what we were hoping for (i.e. soft warm light lighting up the Silent City at Inspiration Point), but we did get to see a sunrise nonetheless, and they’re almost always breathtaking regardless of whether it was photogenic or not.

Once we had our fill of Inspiration Point, we then headed over to the trailhead for the Navajo Loop, which was somewhere near Thor’s Hammer. It was about 6:45am when we started the hike, which was quite early. But since we were planning to drive all the way back to LA after this hike, the early start certainly would up our chances at getting home at a reasonable hour so work tomorrow wouldn’t feel like hell.

Anyways, our intent was to combine both the Navajo Loop with the Queen’s Garden as well as the Wall of Windows. It would amount to something on the order of 5-6 miles or so to do the entire figure-8 loop hike. And we pretty much got right to it as we descended switchbacks into the depths of the so-called Wall Street, which was a series of hoodoo walls arranged like converging walls narrowing into an “alleyway.”

When we made it into the alleyway, we noticed there was a tree that was actually growing in there, which seemed like somewhat of a minor miracle given the limited amount of real-estate here.

Then, Wall Street opened up on the other side as the trail curled around into a more open area where we looked back and noticed the warm early morning glow light up hoodoos. It was too bad that we were kind of looking against the sun at this point, but I guess that just hastened our hiking towards the arches and formations we were looking for on today’s hike.

The trail undulated quite a bit, which surprisingly took a little more out of us than we wanted. But at least, the elevation gain wasn’t as dramatic as the Wall Street descent.

By the time it was 9am, we finally arrived at the Wall of Windows, which featured a pair of large peek-a-boo type holes. I figured that this was the main reason why they called this loop trail that we were on the Peek-a-boo Loop.

After having our fill of this formation, we then completed the loop resulting in one half of a figure-8 formation that our loop hike route was essentially shaped like.

Next, we made a short out-and-back detour into the Queen’s Garden. I believe it got this name because there was a very eccentric hoodoo formation called Queen Victoria. And when we finally made it to that formation, we had to say that it certainly beared a rather uncanny resemblance to her majesty.

When we had our fill of this rather geologic oddity, we then returned to the figure-8 loop trail we were doing and were back on the Navajo Loop. We then headed towards the Twin Bridges, which was a pair of natural arches that looked like a pair of bridges at angles to each other spanning a small “alleyway” with a dead-end.

Once again, we took our time taking many pictures of both the formation as well as people shots. This one was harder to photograph since generally you want to see blue skies through the span of the arch to prove it was an arch in addition to adding some color and contrast.

Anyways, the trail then started to ascend again as we were finally making our final climb back to the trailhead. I had done my research and the way we were doing the figure-8 was said to be the recommended way so we wouldn’t be getting our butt kicked going up Wall Street. So even though we were going up for quite a ways, it was more gradual, and we still got to see some formations along the way.

One the formations was Thor’s Hammer. Now that the sun was fully out, we could see a bit more color and detail on the pinnacle that I guess somehow resembled the Norse God’s weapon of choice.

At around 12:45pm, we were back at the car. We made one brief autotour of the park (so Mom and Dad got to see things like the Natural Bridge formation as well as some of the expansive overviews). But then, we had to make the long drive back home.

I was hoping to make a quick detour to see Cedar Breaks National Monument on the way home, but when we got to the road that turned off to that area, there was still a lot of snow and the road was impassable. So I guess that would have to wait for next time.

We’d eventually make it back home pretty late at night due to traffic on the I-15. Typically, it was Vegas traffic. But other than that, we had yet another fun and memorable outing in Nature. And the cool thing was, like our family trip just three weeks ago in Zion, this one also didn’t cost us any vacation days! 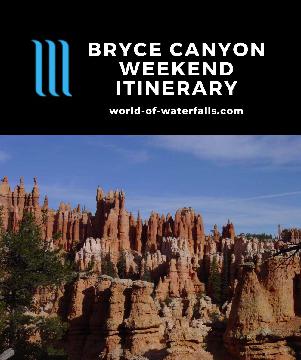