It was around 6am when we awoke at the Bumbleberry Inn in Springdale, Utah. We had made the long drive out here after work yesterday (which was a Friday), and made it to the lodge some time after dinner. I wasn’t sure how much rest Julie got, but I knew that I didn’t get that many hours since Mom, Dad, Julie, and I were all sharing the same room (with 2 twin beds). The thing was that Dad tended to snore loudly and I was a pretty light sleeper.

In any case, we were all out the door by 6:30am. The first order of business was to explore Zion Canyon. Since it was the off season, we were able to drive into the main touristy part of Zion Canyon instead of using the mandatory shuttle which didn’t start running until April, I believe.

The skies were cloudy, which contrasted quite a bit from the scorching hot weather Julie and I had experienced the last time we were in Zion in June 2001. This time around, I timed our trip for mid-Spring while secretly hoping for some rain. I’m sure this thinking must be contrarian as not many people would want rain in their trips, but in this case, we were actually looking for waterfalls in Zion. And that alone would seem like an oxymoron.

The first order of business was to get to Weeping Rock. We’d eventually get there at around 7:15am. The thing about Weeping Rock was that it was basically an alcove with some trickling springs raining across the opening of the alcove. The droplets weren’t substantial enough to be counted as waterfalls (at least in my mind), but I guess just the idea that water emerged from the cliffs above to produce rain-like droplets consistently over this alcove was a bit of a geological wonder, I suppose.

Looking straight out of the alcove, there was a pretty attractive view of Zion Canyon flanked by the imposing sandstone walls that I’d imagine would be analogous to the granite walls of Yosemite.

When we had our fill of the Weeping Rock, we then embarked on a hike up to Hidden Canyon. The hike itself was said to be short (about one-mile each way). However, the trail climbed pretty steeply. But at least the views across the canyon were fine as we ascended higher up from the canyon floor.

What made this trail rather remarkable (at least from what I gathered on my pre-trip research about this place) was that the trail hugged narrow ledges on the way up to the hanging canyon known as Hidden Canyon. There were no guardrails on the dropoff side of the ledge so I could totally see why this hike would test one’s fear of heights.

Fortunately, we noticed that there were chain-linked handholds bolted onto the cliff walls on the side opposite the dropoffs. So we used those to at least ensure that a slip or misstep wouldn’t be immediately fatal.

Eventually, we got to the mouth of Hidden Canyon. Other than some stagnant but reflective ponds in the potholes beneath us as the trail skirted around them, there wasn’t a sign or anything that indicated we made it to the canyon itself.

But once we got past the pools, we then noticed that the trail veered away from Zion Canyon and into a narrow canyon that I suppose could be considered a somewhat wide slot canyon.

The trail at this point was sandy as I’m sure flash floods from the past have scoured or brought sand into the apparent narrow wash we were in. And speaking of flash floods, we noticed some pretty funky psychedelic formations and patterns on the cliff walls attesting to the violent action resulting from the sudden flash floods that occur here during the Summer monsoons.

It seemed like the flash flood patterns were sort of Mother Nature’s artwork as the patterns sort of captivated us. I guess the artwork captivated us enough to momentarily take our minds off the main goal of this hike, which was to find a natural arch within this canyon.

There were even some patterns that kind of reminded us of Jupiter’s swirling patterns. I guessed that there must have been some vortices in the rush of a flash flood that might have essentially caused spiral or hole-like patterns on the canyon walls here.

Anyways, it didn’t take us long to reach the natural arch that we sought out here. It was basically a pretty tiny arch (by Utah standards) that might have been on the order of 15-20ft tall and wide (possibly slightly larger). But there really wasn’t a whole lot about this arch, and it was the butterfly-inducing hike itself as well as the psychedelic patterns that really stood out to us on this trail.

When we had our fill, we then headed back down to the Weeping Rock area where Dad parked his MPV, and that meant we had to go through those narrow sections again. But somehow on this go around, it didn’t seem as intimidating as on the way up (probably because we might have gotten accustomed to the idea of these narrow ledges plus knowing that the chain-linked handholds were there also helped our piece of mind.

By around 10am, we were back at the trailhead. Now that this was done, we really didn’t have anything planned since the goal of the trip was waterfalls. It hadn’t started raining yet though the clouds were certainly threatening.

So we spontaneously drove back out of Zion Canyon then up the Zion-Mt Carmel switchbacks leading up to the tunnel. I think we only went as far as some viewpoint across the canyon towards some sandstone cliff formations that would’ve been seen from the Canyon Overlook viewpoint (whose trail started just on the other side of the tunnel). But by then, we decided to perhaps do a hike in the Kolob area since we didn’t do any hiking there the last time Julie and I were there in June 2001.

As we drove out of this section of Zion and headed west towards the I-15, it started raining. By the time we made it to the entrance for the Kolob section of Zion National Park (around 1pm), it was raining pretty hard. And by the time we made it to the end of the road at the viewpoint for the Kolob Finger Canyons, the fingers were mostly concealed in clouds and the rains were consistent and hard enough to constantly get on our camera lenses when we took photos.

Given these conditions, it was decided not to pursue hiking in this section of the park. So we drove all the way back towards Springdale again. However, given the wet conditions, the I-15 was a little more dangerous than we thought as big rig semis would kick up lots of spray that essentially reduced visibility whenever we were behind them or trying to pass them. But aside from those scary moments, we were back on the road leading through Hurricane, Virgin, and eventually to Springdale.

As we entered the town of Virgin, there was a big traffic jam as apparently the traffic stopped moving in town.

It turned out that we happened to show up just in time for a parade that was going through the main road in Virgin. We might have missed most of the parade, but the long queue of waiting motorists didn’t start moving until some state trooper vehicles (whom I guess were part of the parade) passed by while blaring the classic reggae tune of “Bad Boys, Bad Boys, Whatcha gonna do? Whatcha gonna do when they come for you?” (you know the same tune they use on the show COPS).

Once that was over with, then we finally made it to Zion Canyon again at around 4pm. We still didn’t really have any idea what we wanted to do with respect to how to spend the rest of our time, so we ended up going to the trailhead for the Riverside Walk, and we killed time walking all the way to its end in our rain ponchos.

There wasn’t anything real remarkable about the walk since Julie and I had done this hike already. But I guess it was quite empty given the rainy conditions. Plus, no one in their right mind would go into the Virgin River at this time when the threat of higher water levels combined with the real cold temperatures (that was producing snow towards the top part of the cliffs around us) could easily make one hypothermic and/or drown.

I guess this display wasn’t as dramatic as a flash flood thunderstorm would be, but just seeing the sight of a tall waterfall amidst the sandstone scenery of Zion was good enough for us.

After having our fill of this waterfall, we then slowly made our way through the rest of Zion Canyon. And in addition to the Temple of Sinawava waterfall that we had just seen, we noticed there were more pretty tall waterfalls making an appearance amidst more imposing sandstone formations.

There was even one noticeable one coming out of a crack in the cliffs near where we expected the Upper Emerald Pool to be. So that whetted our appetite to do the Emerald Pools hike tomorrow as we were sure there would be pumping waterfalls even if the storm stopped now (which it didn’t). But it was getting late in the day as darkness was coming as it was well past 6pm by this point.

We ended off the day back in Springdale having ourselves a family dinner in one of the restaurants here (I forgot which one), and enjoyed a pretty restful sleep at the Bumbleberry (with the exception of Dad’s snoring again). 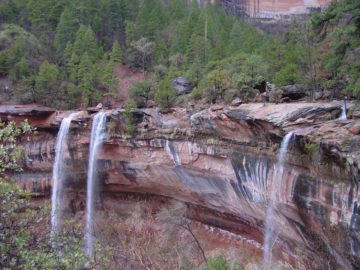