Our 3-day Weekend Itinerary Exposing Them To California's Driest Region

This was kind of a spontaneous last-minute long weekend trip where we waited for the kids to get out of school.

Then, we headed right up to Lone Pine, which was the base of our excursions in and out of Death Valley.

While I had ulterior motives of revisiting Darwin Falls for the first time in nearly 11 years, this was really about exposing Tahia and Joshua to the wide variety of Nature, even in some of the harshest environments on the planet (let alone the state of California).

Here are some highlights and trip logistics… 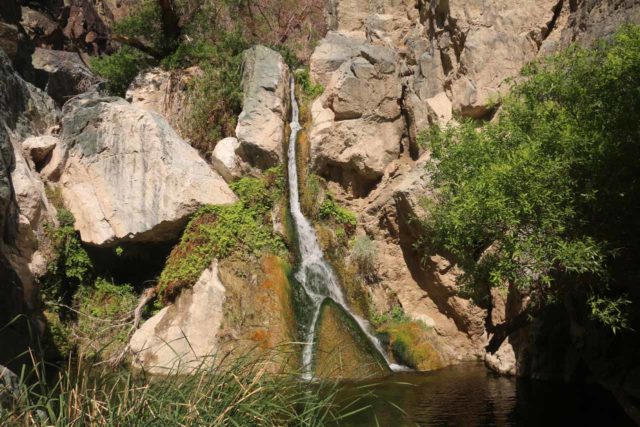 Darwin Falls – while it may seem like a paradox that Death Valley National Park could even have waterfalls, this little desert oasis in the Panamint Springs area was essentially the miracle of the desert. The hike into the wash was a fun adventure for the kids, and by the time we got to the waterfall itself, no one wanted to leave… 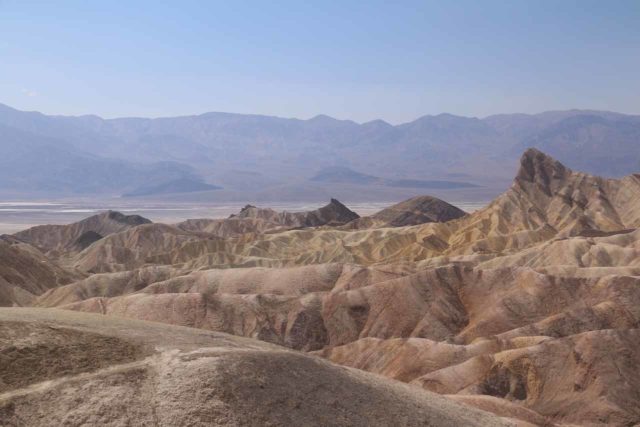 Zabriskie Point – it was very windy on the day we visited this scenic spot so the sand that was chucked in the air at high speeds actually stung us from time to time. But aside from that, the views of the wrinkled badlands made it clear to us that we were in an unusual place where only extreme conditions could produce such scenery… 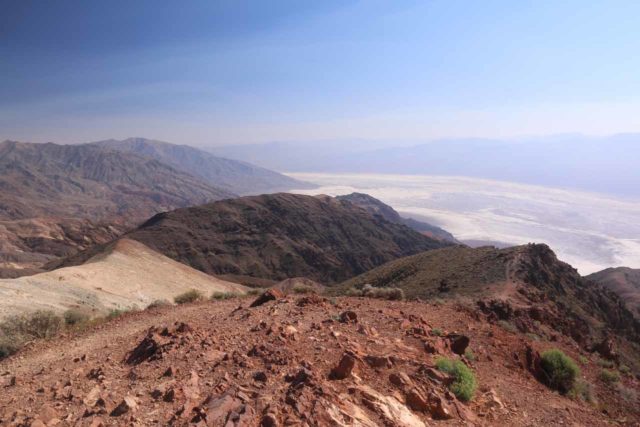 Dante’s Peak – this was one of the more accessible peaks overlooking the forbidding Death Valley. The views from up here made us realize just how dry and desolate the valley below was as the extent of the salt flats and sandstorms were clearly visible from this vantage point. It was also noticeably cooler up here given the elevation change. 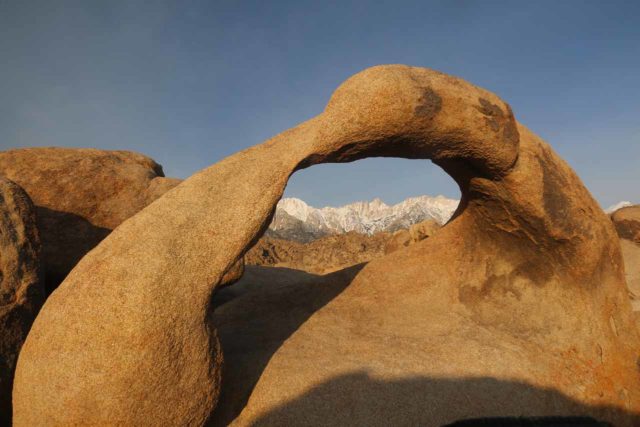 Alabama Hills – while most of the family were sleeping in, Mom and I braved the frigidly cold morning to explore the eccentric rock formations and hills at the foot of the tallest peaks of the Sierra Range (including Mt Whitney – the highest point in California and possibly the highest point in the lower 48 states). This was where we managed to see Mt Whitney through the Mobius Arch as well as getting to see a part of the Sierras that we had always passed by until now. 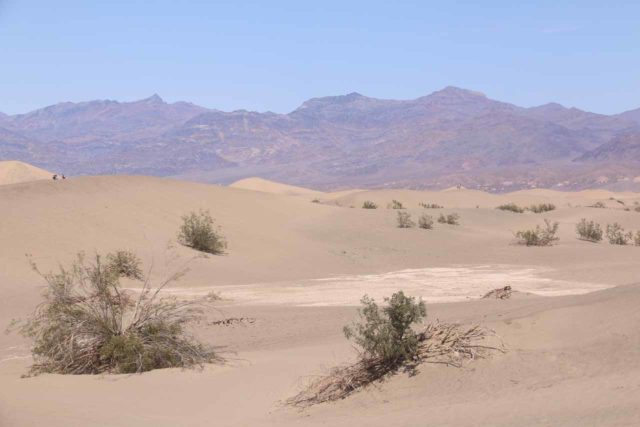 Mesquite Sand Dunes – with all the sightseeing that we had done up to this point, I knew the kids needed some time to play. Well, on the day that we were leaving for Los Angeles, the winds were calmer so we took the scenic route and headed back into Death Valley so they could play in these most accessible of the sand dunes. They thoroughly enjoyed the experience, and it was the highlight of the last day of this weekend trip.

We didn’t have any plans for sightseeing since we couldn’t begin our drive until the kids got out of school. That meant that we had to deal with rush hour traffic to get out of Los Angeles. It was probably a good thing we didn’t have sightseeing plans because there was an expected thunderstorm that produced quite a bit of rain in the Lone Pine area. 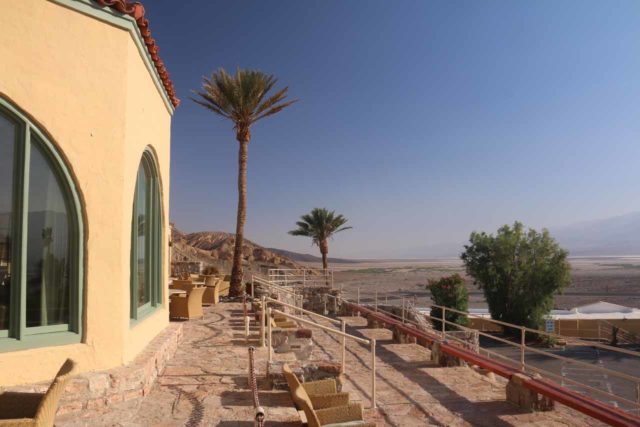 We pretty much spent this entire day driving into Death Valley and doing what limited sightseeing we could reasonably do in a day with kids before heading back in the dark. The day began with a visit to Darwin Falls, then checking out Zabriskie Point and Dante’s Peak. Finally, we had a dinner at the Furnace Creek Inn while enjoying the premises before making the long drive back out to Lone Pine. 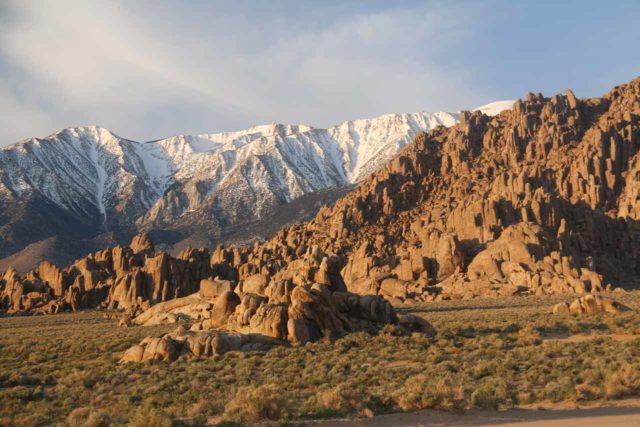 Mom and I began the day trying to photograph the alpenglow from the sunrise hitting Mt Whitney. We then headed over to the Alabama Hills for a little bit of sightseeing despite the frigidly cold temperatures. With the Alabama Hills being so impressive, we brought the rest of the family here after breakfast. We then made another out-and-back- detour into Death Valley so the kids could play at the Mesquite Sand Dunes near the visitor center. We then had a lunch in one of the restaurants by Stovepipe Wells before making the long drive back home passing through places like Trona en route. 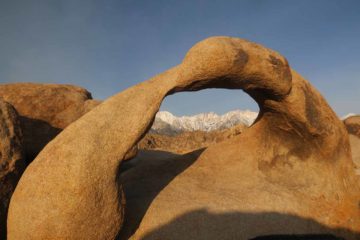 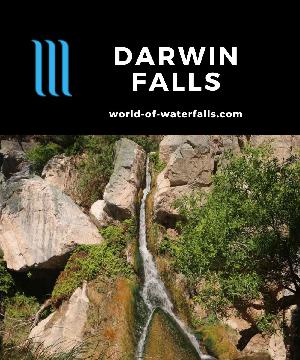