Can This Shoe Go Where My Hiking Boots Can't?

One thing we learned about chasing waterfalls is that we frequently encounter water on the way to them. However, most (if not all) hiking boots are ill-equipped to handle situations where we have to go right through water deep enough to inundate them to reach the goal. And that’s where water shoes become an invaluable piece of gear. So in this article, I review the Keen Arroyo 2 Sports Sandal because it has been my primary water shoe for at least the last 5 years before this review was made.

Prior to this sports sandal, I’ve also been wearing the previous version of the Keen Arroyo for nearly another 7-8 years (before that shoe came apart while floating in a river in Vanuatu). Indeed, this shoe is something that I’m quite familiar with, and I’ve got quite a few things to say about my experiences with it. So let’s get right to it!

Why Use The Keen Arroyo II Sports Sandal?

To make a long story short, the main purpose for wearing the Keen Arroyo II Sports Sandal is for hiking in rugged conditions that involve lots of water.

If you’ve ever had to walk in wet shoes that weren’t meant to be wet, then you have a pretty good idea of how uncomfortable and unsanitary the experience can be.

Now imagine hiking for over 2 hours in them, and you’ll get an idea of how fungi and bacteria can fester in such conditions. Moreover, if the shoes weren’t supposed to get wet in the first place, then there’s a pretty good chance that they’re pretty much ruined for good, especially if they do get inundated in water.

Nevertheless, when I look at waterfall hikes, I’d like to think that waterproof hiking boots should be good at keeping water from getting inside. However, that only got me so far as I’d often encounter stream crossings or pools where there’s no choice but to allow the water to come in from the top in order to proceed!

When such boots accumulate water like that, they tend to retain the water like a bucket, which makes every step heavier as well as uncomfortable.

Therefore, in order to avoid such predicaments, I’ve been using the Keen Arroyo II Sports Sandal because it is designed to embrace inundation in water. As a result, water depth no longer becomes an issue.

The Keens can get away with this by having open holes for both breathability while also letting water (as well as some pebbles or rocks that do manage to get in) to escape.

The shoes also have rugged soles for respectable traction along with some coverings for foot and heel protection so they can be adequate for a lot of short half-day hikes.

Since the Keen Arroyo II is technically considered a sandal (it blurs the lines between being a water shoe or a rugged sandal), it does beg the question how they perform against the classic Chaco sandals.

Even though I find Chacos to be pretty comfortable to wear (wet or dry) for casual everyday use, they do make my feet and ankles more vulnerable to injury in rugged conditions.

Thus, I tend to favor the Keen Arroyo II over my Chaco Classic Z/1 on my hikes that involve lots of water.

When Should I (Not) Use The Keen Arroyo II?

Generally, on all of my adventures in tropical destinations (where we know we will have to hike in water), I only bring my Keen Arroyo II and leave the hiking boots at home.

For example, on trips to Hawaii, the South Pacific, the jungles of Asia, South America, and the Caribbean, I pretty much wear Keens on the plane and wherever I go in the bush.

For other locations, I make a judgment call as to whether I want to solely rely on my Keens or not. Of course, if the hike involves walking in water, then I find that wearing my Keen Arroyo II is the way to go.

However, if wearing Keens are so great for hiking in water as well as for typical day hikes, does this mean that I don’t need to wear hiking boots anymore?

Well, it depends on the kind of hiking you intend to do.

In addition to the aforementioned tropical destinations, I have found it more useful to hike in Keens instead of hiking boots in many of our Rocky Mountain and Black Hills excursions on a recent mid-Summer road trip.

On that trip, there was a surprising amount of creek crossings and deep pools that inundated my hiking boots.

Conversely, for long distance hikes (even if they involve water), I’ve actually hiked in the Keen Arroyo II on a 16-mile day-hike to Yellowstone’s Union Falls and back (which required a river crossing and a stream crossing).

Unfortunately in that situation, the wet shoes combined with prolonged chafing on the undersides of my wet feet ended up causing the skin of my feet to open up and bleed.

Luckily, they didn’t get infected, but that experience made me realize the limitations of prolonged hiking in Keens.

In hindsight, that would have been a situation where it might have been wiser to bring the Keens as a backup for just those water crossings while primarily hiking in boots.

Another situation where I felt more confident hiking in rugged hiking boots instead of the Keen Arroyo II was on steep and narrow “trails” where a slip-and-fall could be the end of me.

Case in point, I would recommend using hiking boots for long Norway hikes like Kjerag and the top of the Vettisfossen waterfall because traction in the face of dropoff exposure was very important.

The same thing can be said of my hike to Menace Falls, which involved clinging to a real sketchy, narrow and steep loose scree ledge towards the end.

Finally, the last thing that made me aware of the limitations of prolonged usage of Keens on a hike is the vulnerability to snake bites.

I nearly stepped on a young rattlesnake on a hot day during a hike in Northern Utah’s Adams Canyon. Luckily it didn’t bite me, but if it did lunge at me and bit my foot through the shoe’s openings, then I would have been screwed.

So given these limitations, I typically wear my hiking boots as the default footwear on my hikes.

However, I often waver between wearing the Keen Arroyo II as opposed to my waterproof hiking boots. After all, I have been caught off guard where I wished I had brought Keens instead of hiking boots when I have unexpectedly encountered lots of water.

It’s hard to predict when you’ll need one more than the other. Indeed, hindsight is always 20/20, which is why it’s a tough call on what the default shoe should be without knowing what to expect.

Things To Be Aware Of About The Keen Arroyo II

In addition to the limitations of the Keen Arroyo II water shoe, there were some things that I didn’t like about it.

First, for a shoe that embraces getting wet, it takes a long time (think several hours or even days) for it to dry.

This results in the shoes smelling really bad after getting wet.

In fact, even after the shoes get dry, they smell really bad immediately upon further use even if they didn’t get wet again.

I suspect that bacteria easily grows on the part of the shoe that covers the feet for protection.

While that protective part of the shoe made it more comfortable for the feet while less prone to chafing with use, it’s the main reason why it’s ideal for bacteria growth.

The only defense against this in my mind would be to do some strong disinfectant, especially if the odor is strong.

Another thing that I’m not thrilled about concerning the Keen Arroyo II shoe is that the elastic lacing tightening system does have a tendency to get loose with use.

When they get loose, that can undermine the already minimal ankle stability and support that it does offer, which can make it easier to roll an ankle on an errant rock, step, or hole.

As for traveling with the Keen Arroyo II, I did find them to be less packable and a little on the heavy side.

While I have no problems bringing them along on road trips, they’re harder to bring along on trips involving plane rides.

It’s why I tend to wear my Keen Arroyo IIs on the plane for tropical destinations, but I might have to resort to my more packable (but also heavy) Chacos as backup to say Europe, the Eastern USA, Australia, New Zealand, etc.

The Keen Arroyo II is a versatile sports sandal that does an excellent job of allowing me to tackle rugged wet hikes, which I encounter frequently on my waterfalling adventures.

Even the act of considering ditching my hiking boots in favor of these water shoes is a testament to its versatility.

However, the Keens do have limitations that prevent me from using them generally in hikes that don’t involve getting wet.

I also don’t want to wear them when I don’t have to because they reek after use, especially after they’re wet.

Moreover, travel restrictions pretty much limit me wearing them abroad to only tropical destinations where it’s harder to avoid getting wet and muddy.

So given that I use them for very specific situations, they tend to last a pretty long time (like several years) aside from the fungal and bacterial growth that they tend to harbor.

Indeed, I may avoid using my Keen Arroyo II sandals for casual everyday use and long hikes, but they certainly do the main job of allowing me to tackle water-heavy adventures. 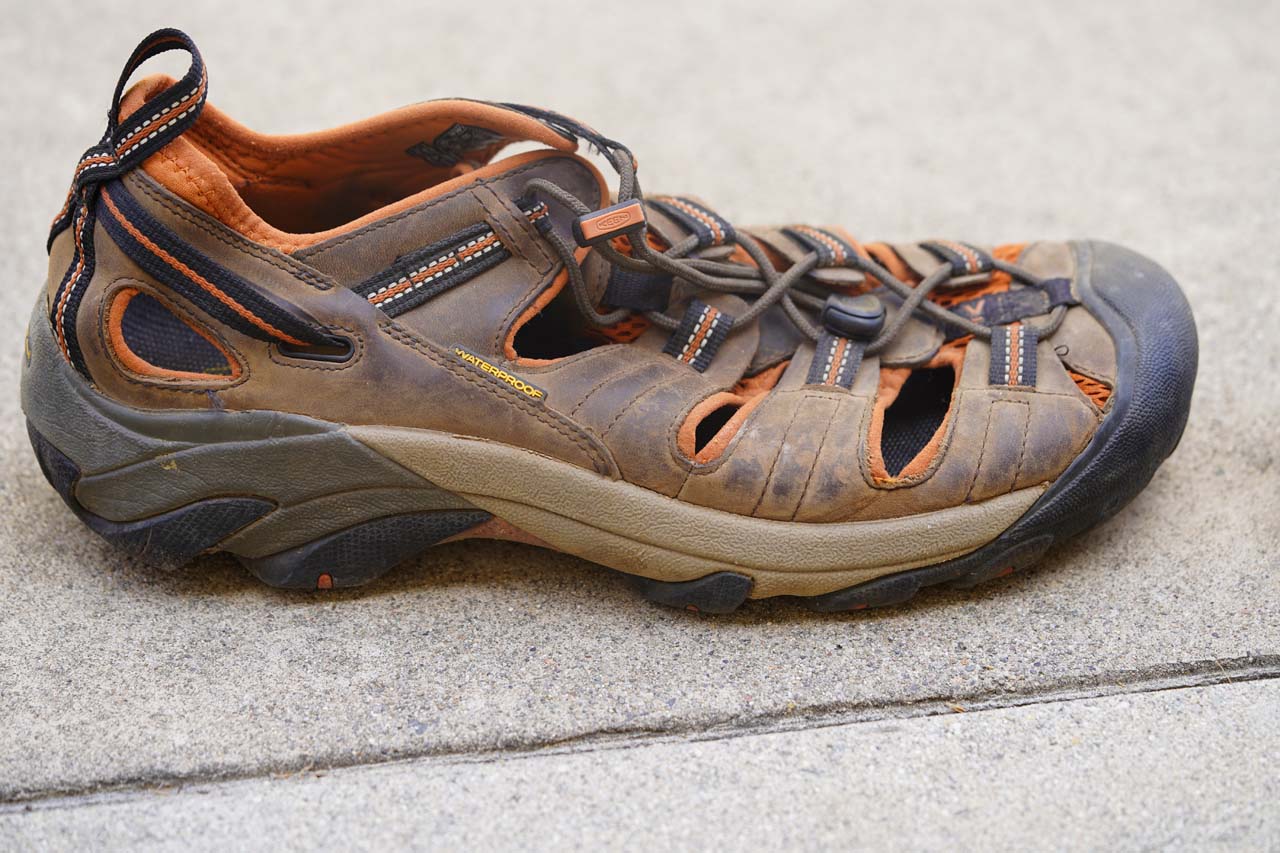