This was a weekend backpacking trip that began and ended at Lake Sabrina.

The ultimate main goal of this physical challenge was to get as far as the Hungry Packer Lake, which was one of several lakes of glacial origin in the area.

The Eastern Sierra was full of these kinds of lakes. Of course, I also had a waterfalling excuse to do this backpack as there was an officially-named waterfall en route as well.

In any case, our troop consisted of a party of seven, and as always, it was great company amidst some great scenery. Indeed, this is what backcountry backpacking is all about, and the following summarizes the logistics and highlights behind such a trip… 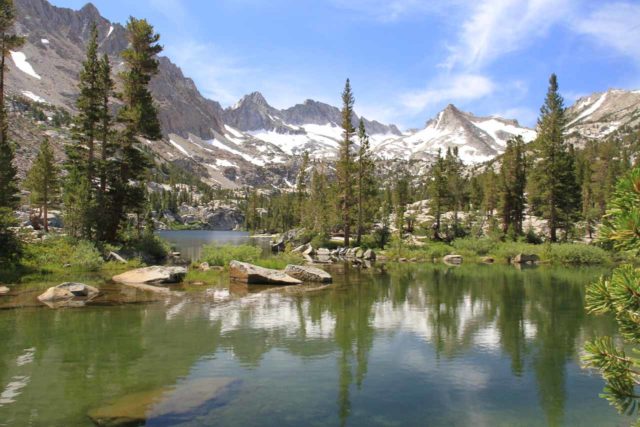 Blue Lake – this was one of a handful of attractive natural lakes we encountered (Lake Sabrina was man-made) en route to our backcountry camp. What made this one so attractive was the jagged peaks backing its calm and reflective surface. 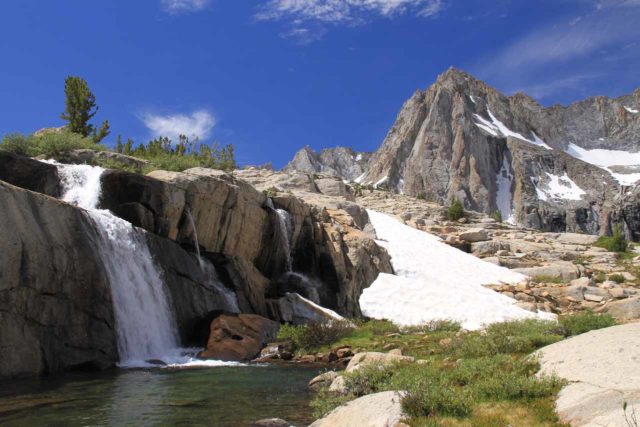 Moonlight Falls – This was the lone waterfalling reason that I was enthused about doing this backpack. While it’s possible to make it up to it as a day trip, we broke it up as an overnight backpack so we can get to this spot with just our day gear. One of our trip participants used this as an opportunity to go for a cold swim! 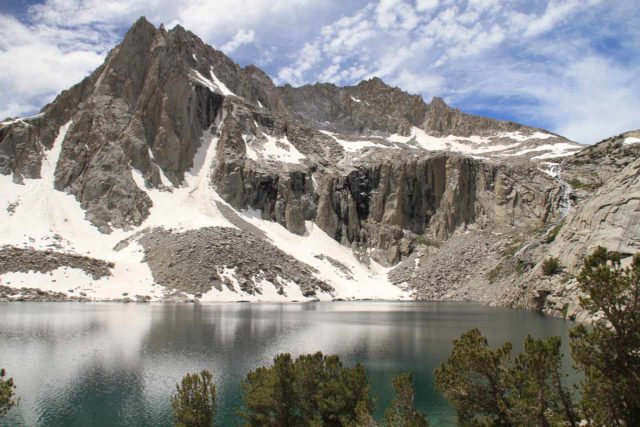 Hungry Packer Lake – This was the furthest lake that we reached as it was one of the highest as well. The mountains backing it seemed to be part of the crest for any precipitation falling on the other side of it would drain towards Sequoia National Park instead of towards the Owens Valley. This place also featured a few surprise cascades from the melting snow. 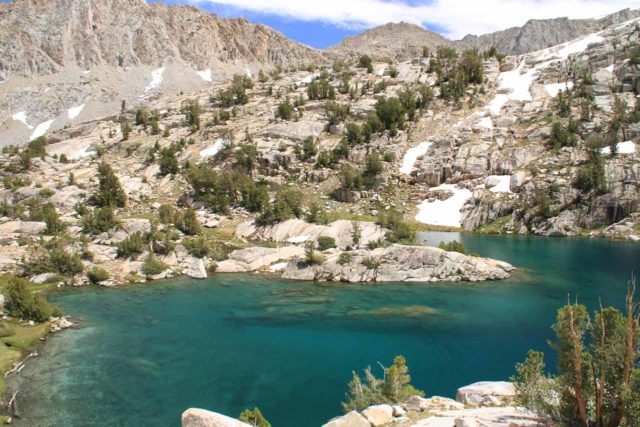 Moonlight Lake – This was the lake responsible for feeding Moonlight Falls with its water. But as you can see from this picture, this lake featured a deep blue hue as well as a clarity from being so close to the crest.

In my mind, overnight backpacks require quite a bit of preparation to pull off since you’re out in the wilderness with no ability to shower, there’s nothing else around except for what you (or your mates) brought yourself. There are wilderness ethics to consider as well as weight of the pack (which means making choices about what to bring and what not to bring). So there was indeed lots to learn with each backpacking trip I’ve done, and this trip was no different…

This is not the place for gluten and/or lactose intolerance: My bowels were not thanking me one bit on this trip because I kept going through my stash of toilet paper to let out diarrhea. At over 10,000 ft in elevation, any bloat or gassiness seems to expand even more and make just idle standing even more uncomfortable. So the big lesson learned here is to avoid gluten and lactose prior to embarking on the physical challenge of doing this backpack. I made the mistake of having milk and oatmeal along with cinnamon rolls for the included breakfast from the accommodation before heading out, and I wound up paying for it for the entire duration of this backpack.

Mosquitoes: Even though our visit took place well into the Summer in early August, the mozzies were quite intense because of the high snowpack that we had accumulated this past Winter. Plus, camp just so happened to be near a couple of the lakes that were prevalent in the Eastern Sierras. Mosquitoes like standing water, and there were certainly plenty of spots where they could spawn as a result.

Generally, what I do to mitigate the issue is to put on DEET even though I can’t shower for a couple of days. It was a trade between potential poisoning by chemicals versus potential long term mosquito-borne illnesses like West Nile Virus. I also try to keep moving (though that’s hard to do in camp) since mosquitoes would have a harder time targeting a moving body as opposed to a stationary one. Finally, I’ve found in the evenings that they tend not to be around bothering you at night time (though they’re the worst at sunset) because they hide underneath pine needles.

That said, we did see flashes of lightning in the distance so there could certainly be pockets of thunderstorms that stick around throughout the night, but such occurences seemed to be rare in my experience.

This was basically a driving day, where we started right after lunch and made it to Bishop in the late afternoon and evening. 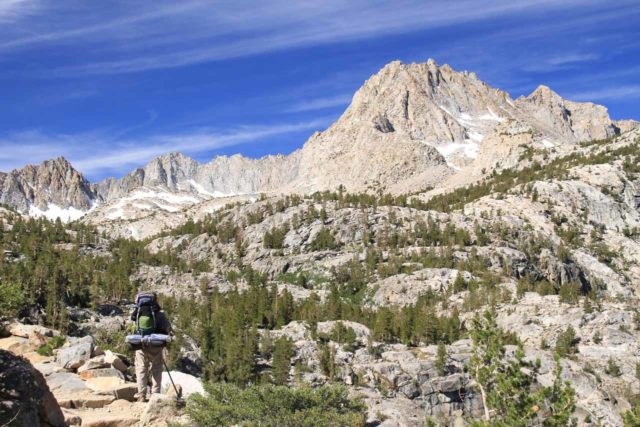 After checking out of the accommodation, we got an early start and arrived at the trailhead shortly after sunrise. From that point, we all met up, did the hike, and eventually settled on a campsite near Dingleberry Lake (and not even further to Topsy Turvy Lake as originally planned). Along the way, we checked out the several lakes including Lake Sabrina and Blue Lake as well as a whole lot of high country scenery near the tree line. 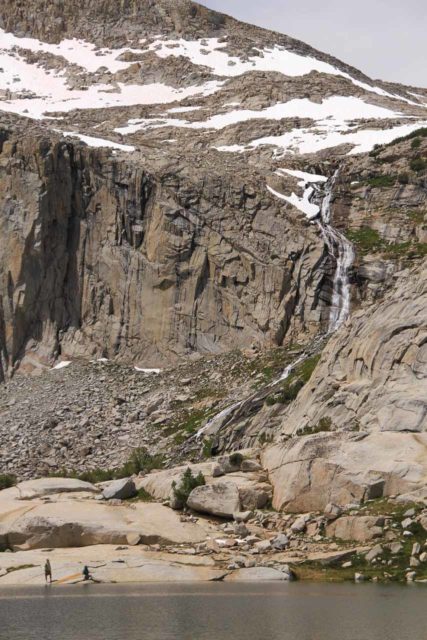 On this day, we hiked out to Hungry Packer Lake with a detour to the Moonlight Falls and Moonlight Lake. Then, we returned back to camp for our last night in the wilderness. 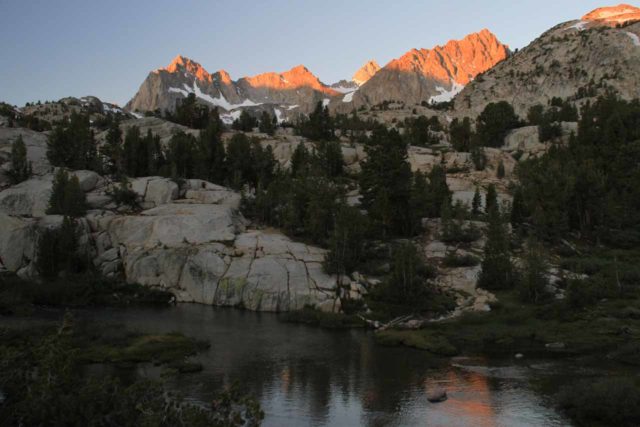 After breaking camp and having a breakfast, we backpacked back down to the trailhead. Then, after a lunch in Bishop, we drove home. 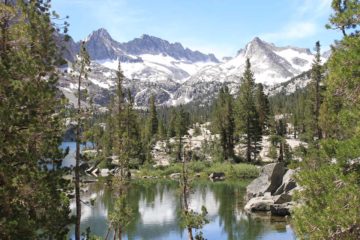 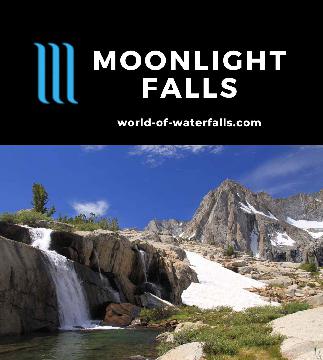