"Do You Have Your Vouchers?"

It was Sunday night at 11pm when Julie and I were about to take off on our red-eye flight to Miami. Although it had barely been 2 months prior when we did our Iguazú Falls trip, we still felt like newbies as this time we traveled lightly (no checked bags). Of course this also meant I didn’t have my tripod nor our laptop (though we doubted we needed the latter for Venezuela). But nonetheless, we were excited that we were bound for the next waterfall wonder of the world – Angel Falls!

So our red-eye flight took off uneventfully, but as usual neither of us had a real good nights rest on the place. We arrived on time in Miami International Airport and waited a little over 3 hours for our next flight to Caracas, Venezuela. There wasn’t a whole lot to do except watch CNN, and the fact that we didn’t have checked luggage meant we had even more time to spare. But we’d rather have this problem than the possibility of missing our connecting flight had we been delayed…

At 4pm, we arrived at the Simón Bolívar International Airport in the Maiquetía suburb of Caracas. The flight was once again uneventful and even the landing was one of the smoothest I could recall – so much so that it prompted applause within the plane.

Once again, we had plenty of time for our next flight to Ciudad Bolívar, which was at 8pm. In the mean time, we had to endure a horrifically long immigration line for passport processing (this took at least an hour), then another long customs line (this took at least another 15 minutes). Finally, we met our tour representative Karín, who helped us to exchange some of the US dollars we were willing to spend (I think on the black market) for Venezuelan Currency (or the Bolívar). That exchange seemed rather seedy as there were exchange offices at the airport, but I had read earlier that the official rate is almost 50% of what the black market rate was. In any case, we didn’t change a whole lot of money (barely 40% of the US cash we had brought abroad) and we hoped that would be sufficient for our needs.

Karín then walked us over to the domestic side of the airport where we’d have to wait for our connecting flight. In the mean time, she also handed us vouchers for the remainder of the trip and led us to places where we were supposed to pay the airport departure tax while receiving the boarding pass. It turned out that our small little luggages with rollers had to be checked in since they’re using smaller planes for these flights. She also engaged in a speaking spanish since I figured this was a good starting point to brush up and test what I knew.

So as we passed through security and walked around the domestic side of the airport, we still had another couple of hours to kill so we tried to get some of the local fare and the Budare stand seemed most popular so that was where we went. Well the server didn’t speak any english and I couldn’t quite recognize some of the words for some of the foods he was showing us as Julie pointed so we pretty much got an arepa of chicken (pollo) and beef (carne). Julie let me have it by saying I need to be more fluent in spanish.

After waiting and watching the television screen at the correct gate for our flight, we finally managed to leave Caracas about a half hour after our scheduled 8pm time and arrived in Puerto Ordaz at around 9pm. I had made pleasant conversation with a Venezuelan lady sitting next to me who was getting off in Puerto Ordaz (in spanish of course until I got stuck on a few words in which case she switched to english). The landing in Puerto Ordaz was a bit scary as the plane seemed like it wanted to fishtail and skid off the runway as the plane was braking hard! Shortly after the Puerto Ordaz folks left, we took off and finally arrived at Ciudad Bolívar at 9:30pm. That was where Giovanni our next rep waited for us. He didn’t speak too much english, but so I had to get into spanish mode again. Seemed like spanish is pretty much mandatory given our immediate sampling of people who didn’t speak any english.

After getting our 2 little checked luggages, we noticed that they wrapped all the luggages in some kind of plastic wrap. I guess this was an additional deterrent for theft. Kinda scary that they had to go through these measures to protect passengers, but at least that gave us some piece of mind. There were also military guards patrolling the around with AK-47s. One of them was checking to make sure the luggage you took out had stickers that matched the stickers stapled to our boarding pass.

And with that, Giovanni drove us across the street to Hotel Laja Real, which was where we were to spend the night. According to Lonely Planet, this was supposed to be one of the more upscale hotels in the area. But after getting in to our very basic room (seemed like a 2-star or less), we wondered what our next accommodation would be like when we would return to Ciudad Bolívar in three days. Neither of us were sure whether the LP guide was off or the hotel quality slid since their review (we had the 2007 version of the book), or if the writer’s notion of upscale was just off.

Anyways, tomorrow we’re supposed to leave for the indigenous village of Canaima, which was the jumping off point for Angel Falls. We went ahead and tried to pack our essentials knowing that part of the trip will be more like a camping/backpacking experience and let Giovanni watch our remaining luggage. Then, we showered (the water got cold pretty quickly) and tried to brush our teeth in the mould-laden sink. The power momentarily went out during that time but after a few minutes, the power went back up. It was weird that the water had some kind of reddish or brownish tint to it. We weren’t sure if we were going to get sick from it… 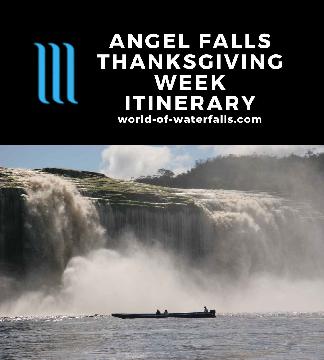