This was a weekend backpacking trip that began and ended in Onion Valley.

The ultimate main goal of this physical challenge was to get up to the Kearsarge Pass (and get the kind of Eastern Sierra panorama that many in the backpacking community would be familiar with).

In any case, our troop consisted of a party of seven, and as always, it was great company amidst some great scenery. Indeed, this is what backcountry backpacking is all about, and the following summarizes the logistics and highlights behind such a trip… 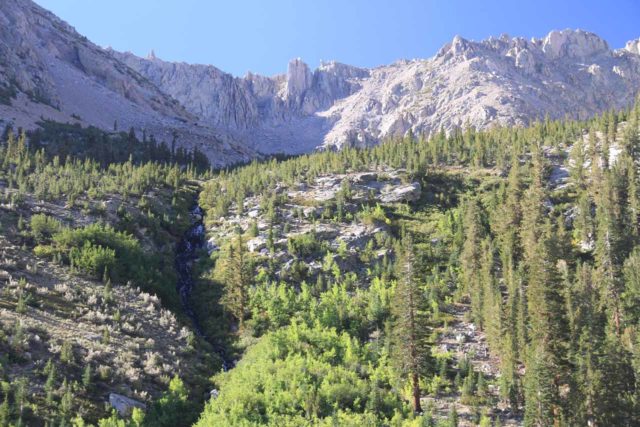 Onion Valley Waterfall – this was the waterfalling reason to do this backpacking trip, and there were actually a handful of them along the hike to get from the trailhead to the backcountry camp. That’s saying something when the primary reason most people do these hikes is for the lakes. 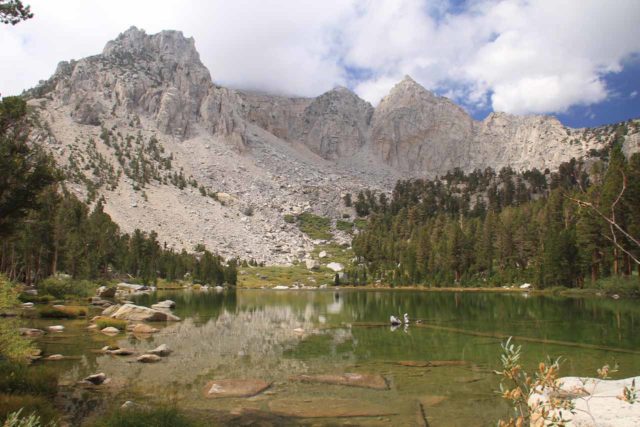 The Lakes – Eastern Sierra backpacking is primarily all about the alpine lakes and tarns backed by steep jagged mountains. Just about all of these have glacial origins, and thus some of them have that familiar powder blue color when it’s sunny. Still, others have that stillness that makes them reflective. Either way, they attract camera clicks and compel us to take rest breaks given the physical demands when hiking while carrying a lot of weight in high altitude. 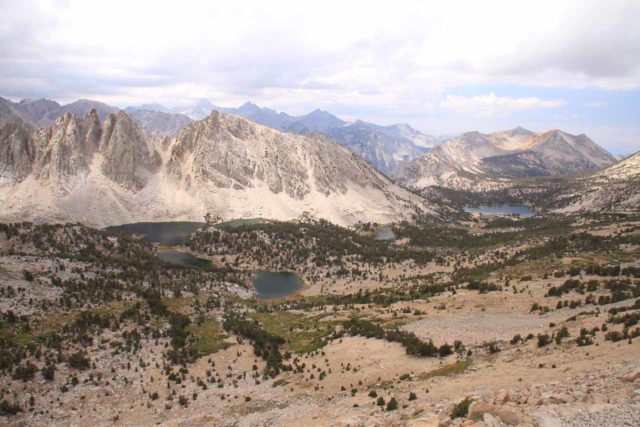 Kearsarge Pass – This was the primary attraction and reason for doing this particular backcountry adventure. This was the highest point of our hike, where looking west yielded lakes and peaks flanking the John Muir Trail. Meanwhile, looking back to the east yielded deep blue lakes and more barren scenery towards the Owens Valley. It’s easy to see why some people don’t want to stop and turn around here (as we did) and keep going deeper into the wilderness to disappear from civilization for a few more days… 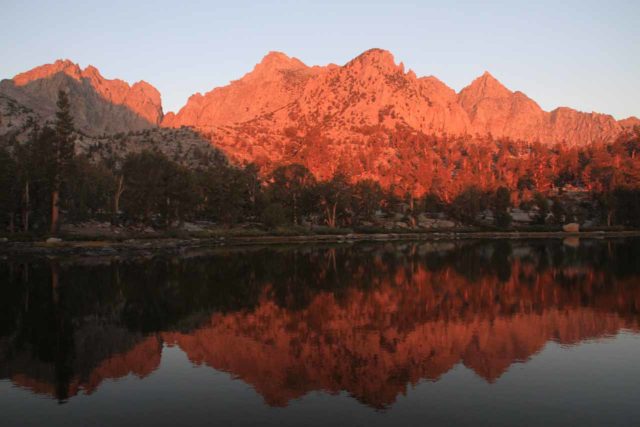 Sunrises and Sunsets – One of the biggest benefits of Eastern Sierra backpacking is the ability to see the alpenglow light up the surrounding mountains at the crack of dawn or the last light of twilight. It’s the kind of experience you don’t often get to do when you’re not in the backcountry. Plus, the time to unwind and trade stories and good conversations with other camp mates were really what backpacking is all about. And what a magical time to go from this visual treat to a dinner by campfire after sunset or breakfast after sunrise.

In my mind, overnight backpacks require quite a bit of preparation to pull off since you’re out in the wilderness with no ability to shower, there’s nothing else around except for what you (or your mates) brought yourself. There are wilderness ethics to consider as well as weight of the pack (which means making choices about what to bring and what not to bring). So there was indeed lots to learn with each backpacking trip I’ve done, and this trip was no different…

This is not the place for gluten and/or lactose intolerance: My bowels were not thanking me one bit on this trip because I kept going through my stash of toilet paper to let out diarrhea. At over 10,000 ft in elevation, any bloat or gassiness seems to expand even more and make just idle standing even more uncomfortable. So the big lesson learned here is to avoid gluten and lactose prior to embarking on the physical challenge of doing this backpack. I made the mistake of having milk and oatmeal along with cinnamon rolls for the included breakfast from the accommodation before heading out, and I wound up paying for it for the entire duration of this backpack.

Mosquitoes: Even though our visit took place well into the Summer, the mozzies were still around because camp just so happened to be near a couple of the lakes that were prevalent in the Eastern Sierras. Mosquitos like standing water, and there were certainly plenty of spots where they could spawn as a result.

Generally, what I do to mitigate the issue is to put on DEET even though I can’t shower for a couple of days. It was a trade between potential poisoning by chemicals versus potential long term mosquito-borne illnesses like West Nile Virus. I also try to keep moving (though that’s hard to do in camp) since mosquitoes would have a harder time targeting a moving body as opposed to a stationary one. Finally, I’ve found in the evenings that they tend not to be around bothering you at night time (though they’re the worst at sunset) because they hide underneath pine needles.

That said, we did see flashes of lightning in the distance so there could certainly be pockets of thunderstorms that stick around throughout the night, but such occurences seemed to be rare in my experience.

This was basically a dedicated travel day where we picked up the rental car locally, finished arranging our stuff, and loading up the car. We also tested our tents to make sure they still worked (though it might be a bit late if they didn’t work). Although we started stuffing our backpacks, we would finish the job later in the evening. It wasn’t until after lunch time did we make the drive and ultimately arrived in Independence in the evening. 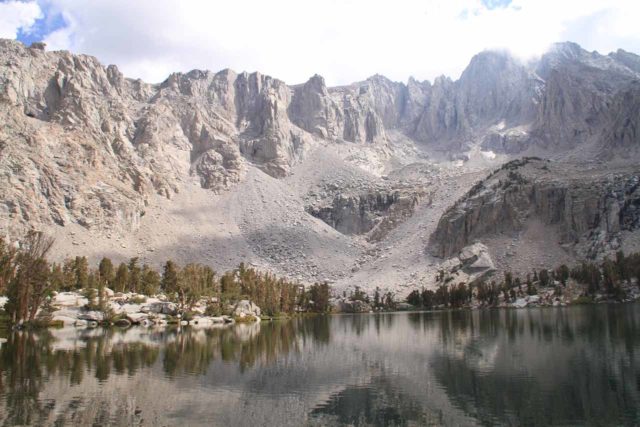 After checking out of the accommodation, we got an early start and arrived at the trailhead shortly after sunrise. From that point, we all met up, did the hike, and eventually settled on a campsite near Matlock Lake. Along the way, we checked out the Onion Valley Waterfalls, Little Pothole Lake, Gilbert Lake, Flower Lake, and Slim Lake. 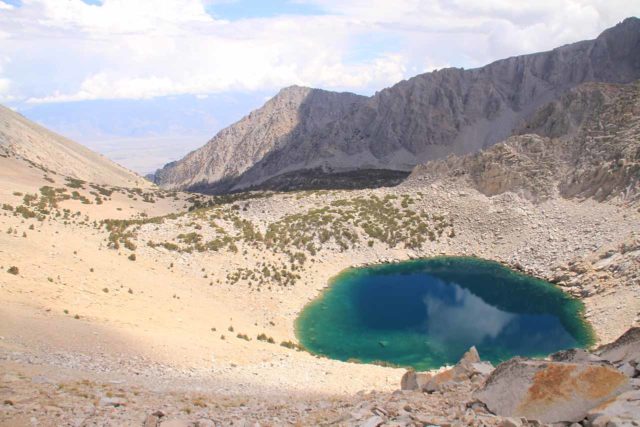 On this day, we aimed to climb up to Kearsarge Pass. At least we were able to do this without lugging a heavy backpack. Along this hike, we experienced Matlock Lake, Bench Lake, Big Pothole Lake, and Heart Lake. With thunderstorms threatening, we didn’t go past Kearsarge Pass (towards the John Muir Trail) nor did we linger for long. 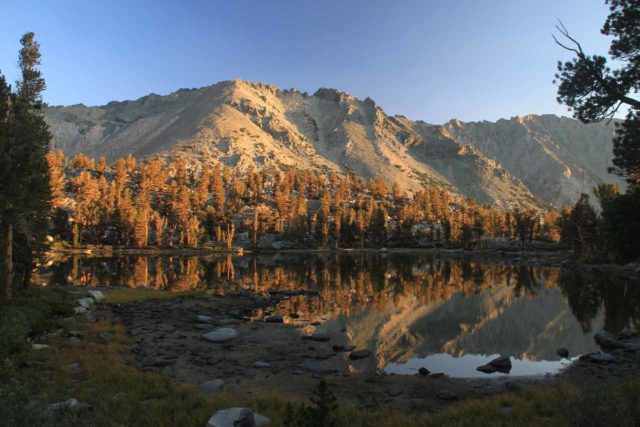 After breaking camp, we hiked back to the trailhead. There, we saw the same things on the way in like Matlock Lake, Slim Lake, and the Onion Valley Waterfalls. 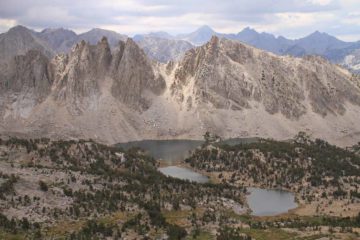 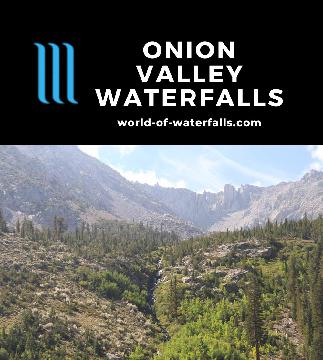