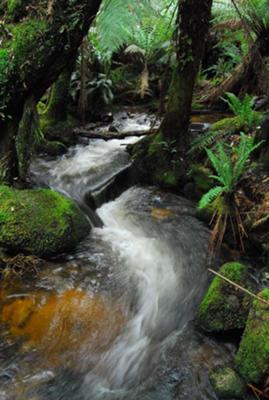 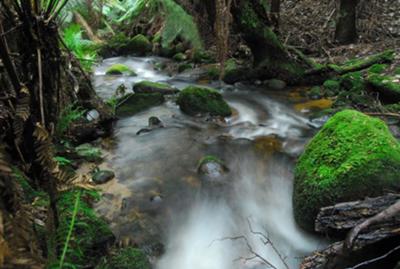 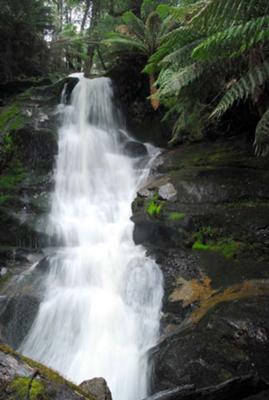 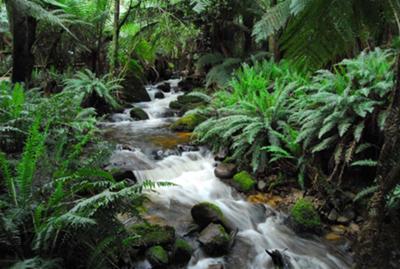 I had to move on, I’d booked a fishing trip for the next day and had only limited time to do another walk and get to the east coast.

I opted for Cuckoo Falls, “…a few kilometres east of Scottsdale. The right turn from the Tasman Highway is well signposted. Follow the signs to the carpark.”

Whoever penned the last sentence hadn’t been there for some time. Signs on the most important intersection aren’t apparent which cost me about 10 minutes, and another sign was overgrown with foxglove but somehow I made my lonely way up the 7km dirt road to its end.

The sullen sky overhead foretold of rain and evening was nigh. I started the walk at 4.45 and took a head light in case the times were accurate and the understorey darkened.

At the start there were leftover walking sticks and a scratched notice saying, “you will need these”. I pondered their meaning and assumed the trail was tough.

The first 200 metres turned out to be picture postcard rainforest streams and belied the last third of the trail on high. The slope is gentle for the first two thirds but the sweat still dripped off my brow as I passed through the masses of herringbone and other ferns that overgrow the trail.

Then you cross a tiny stream where it gets rugged and the trail only just wider than both my feet side by side; some of the drop-offs were scarily steep and this was obviously where the sticks would have come in handy. I figured no-one from my limited bushwalking fraternity would ever do this trail as more sweat poured out when I scrambled up a particularly steep part, over fallen logs and stumbling on rocks.

I couldn’t quite grasp how someone had even found the place, let alone carved a route to this remote location. Just as the falls could be seen flashing behind the trees on the other side of the gorge I got lost, more sidetracked really. Apparently I dipped below the main trail and spend a horrible few minutes scrambling up and down the slippery slope before I found it again, losing my lens cap in the process.

It had been a nervous few moments but within a few minutes I arrived at the elusive Cuckoo Falls, and splendid they were, but I wondered just how many other cascades the trail had bypassed because you could hear them constantly while trekking.

I’d made it through the impressive fern forest in just on 1¼ hours and returned in just under an hour with the sky finally dropping its precipitation in a misty, drizzling display. I was glad to see the highway again but the wind buffeted the motorhome and the rain increased though I still stopped at Little Plains lookout as an eerie sunset flickered on the horizon

and pondered on seeing yet another of the wonders that Tasmania has to offer.