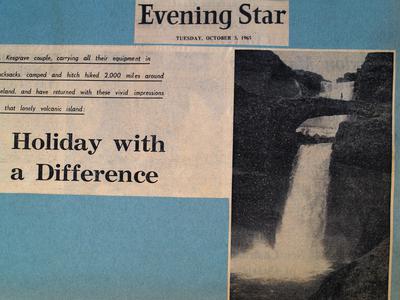 It took us a one-day, 25-mile round-trip walk to see Ofarufoss, in the days that the bridge still existed. Back at home, a picture of it published in the local press led to a part-time income which has lasted the rest of my life.

Back in 1965, my first wife and I, then aged around 26, spent the whole of August camping in Iceland, travelling by bus and hitch-hiking. Towards the end of the holiday, we determined to visit Ofarufoss, despite the difficulties. We used a milk-bus from Vik to get to the farm nearest the waterfall. (Milk buses set off at 7 a.m. to visit all the dairy farms in the region to collect milk in churns. The cabs contained about six passenger seats – and their times were published in the national bus timetable!)

Setting off to walk in the direction of Ofaerufoss, late afternoon, with our rucksacks and tent, the farmer appeared in his land rover and gave us a lift to a ruined farmstead. He said this was within a day’s walk to the falls and back. We pitched our tent within the walls of a collapsed turf building and settled in for the night. The following day was one of the most memorable of my life. We set off at around 7 a.m. with one rucksack and our needs for the day. There was no real track, just a line of cairns to follow. When we forded the first river, we removed our boots and socks, dried our feet on the other side; but we soon realised that there were so many streams that we kept our boots on and did the walk with wet feet.

As we trekked through the amazing scenery, we never saw another person or vehicle the entire day. Flights of geese passed overhead.

Once in sight of the falls, we brewed up a meal before leaving our things below and climbing to the bridge. Margaret stayed on the bridge while I returned to the plain to take a black and white photo of the falls, with her standing on the bridge. It was this photo that was published by the Ipswich Evening Star, with an article about our holiday. Soon after this, I was contacted by the local Women’s Institute, asking if we could give a talk about our experiences. I had taken only around 120 colour slides on the whole trip, but these became the basis of a presentation ‘Camping in Iceland’, subsequently seen by over 20 other local societies.

50 years on, now using PowerPoint rather than magazines of colour slides,I still regularly give talks to all sorts of local societies.