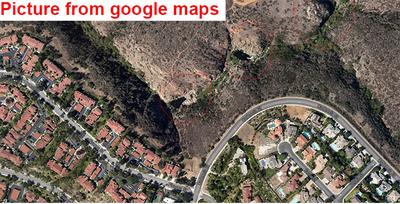 I believe I was 14 years old when I found these falls. I was living in Rancho La Costa in Carlsbad San Diego. I was just out adventuring because I was almost out of cigs. That’s what I normally did when running low on cigs. Some adventure that could last for two hours or two months depending on if I was near the train tracks. But at this time I lived almost across the street from the La Costa Golf and Country Club and was a member I had been looking at the creek bed behind it for several weeks thinking it would be a good place to wonder off to so I did. I guess all places worth finding are attached to a hike for some reason. And this was not the easiest of hikes I had ever went on. I remember it well because I had three cigs. and they were in my shirt pocket and the first time I had to jump over the little creek that I was following. I managed to lose them in the water. I was pissed off. After about an hour and a half of dodging brush and jumping rocks there it was – about thirty five to forty feet of waterfall. It had a nice size pool and a flat wall that over hung it. Being a cliff diver the first thing that came to my mind was how deep is it. So off came the shirt the shoes and socks to go and see I waded out and it dropped off almost immediately which was a good sign to me. I swam to the spot that I figured I would hit if I was diving from the rocks and down I went and down and down I almost ran out of air before L turned around to go back up. I came up all excited because there was nothing down there. Instead of swimming back over to were my shirt and shoes were I swam to the waterfall as that was where I would have to climb back up to jump again. and I climbed up for the first jump. It was easy enough bare footed and all but I had to walk around to the right side to get to the place where I would want to jump. I was wishing I had left my shoes on as some of the rocks were sharp. When I got there I noticed a lightly worn trail going up where the houses were and thought to myself that’s the way I’ll go after I get my shoes. I was looking at close to an eighty foot drop to the water and knowing that the water was moving that it would be a little softer. So being the crazy person that I am I dove off. It was fantastic the second time I did a back flip and the third I did a can opener figuring if I was going to feel the bottom this would be the one to get me there. I’ve made thousands of jumps and never once did I touch the bottom of that pool. But the best part of it all was after I got my shoes and shirt and climbed back up and took that lightly warn path I came out five minutes from my house. Also extended adventures revealed two more waterfalls up stream.

Directions: Take the San Diego 5 freeway and exit La Costa Ave.go left over or is it under the freeway past the golf course on your left hand side and then turn left on Cadencia St. after you pass three streets there will be a spot on the left hand side where there are no houses and sense it has been thirty six years sense I first laid eyes on the falls they have put up a fence around it I’m not sure why If the road turns right on you you have gone to far cross streets are Cadencia St and Piragua St. And you can see all three falls on google maps

About Rancho La Costa Three With No Crowds