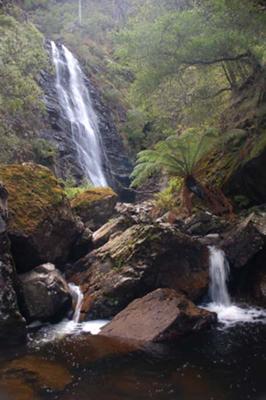 “I can’t remember the last time it rained,” the man in Devonport had said.

And there I was looking forward to photographing waterfalls.

Things change though; by the time I reached St. Helens two days later I listened to the news and they said Mathinna had had 52 mm. Fate had dealt me a kind blow.

Lord knows, Michael and I had put in. One hour climbing through virgin scrub up steep cliffs and still we hadn’t got there. With every passing step we seemed to get further from our destination.

Our legs were scratched, our bodies tired, we gave up. Mathinna Falls had defeated us.

It leaves a hole in you. Knowing that somewhere there’s a trail but you missed it. I had assumed the track would be easy to follow but, no, it was just the opposite.

So, when I got home it was time to hit the internet.

I located the site once more and emailed the man who had submitted the photos. He informed me we had to go up the left hand side; we had made our assault on the right. It’s easy when you know where to go.

Thus it was that I turned up full of optimism in this lonely outpost, 6 kms down a dead end dirt road with the nearest civilization (Mathinna) about 12 kms away, and it only had a store and a cafe that was closed when I later called in there.

With sandwiches and drink on board I set out on the walk, briefly stopping at the first falls because Mathinna is a series of four falls and it’s an easy 10 minutes walk to get to the first.

I knew how to get to the second set; it was a scramble up a scree slope on the right and then a clamber over some old growth trees before stepping out on the flat area beneath the water.

The sun was proving troublesome for photography, first out, then behind a cloud (where I wanted it) and then sunny again.

Still, this wasn’t my goal, I was anxious to climb further. It was around then that the fun, so called, started.

As I scanned the left hand side nothing looked easy but I could see what appeared to be a possible route and set off.

It was difficult as I clambered up the steep slope, brushing aside low branches, scrambling over moss laden rocks until I came across a scree slope that seemed to offer a way out.

Up I climbed and into the plant that was to haunt me for the rest of the day. It was some kind of stinging plant and, even as I write, there are constant pins and needles in my shins and hands.

At first I thought the pain would go away and, at times, it seemed to but, whenever you touched the area it fired up again.

Eventually the whole area where I had been stung rose with red marks to the point where no ordinary skin was visible.

I reached the place where I thought I could break out onto a plateau but the scree merely turned in another direction and still headed skywards.

The struggle continued, where was that track?

Eventually I reached a point of no way. Large rock formations and undergrowth that was impenetrable blocked my progress. I was shattered. A half hour of climbing had gone for nought and I had to retreat.

I reflected on a book I had been reading where Sir Edmund Hillary was featured. He described how, in 1944, he had been at an air force training camp and had determined that he would climb Mount Tahuaenuku.

He hadn’t been able to get anyone to go with him so he went alone. He walked for hours and reached a sheep station where he bunked for the night then thumbed a lift on the nearly deserted road to Lake Hodder before fording a freezing river and sleeping at the flea and mice infested Shin Hut.

He set out the next morning before dawn, climbing to over 9,000 feet through snowfalls. After he reached the summit he came down through more snow and it was dark when he was still a couple of hours from the hut but, incredibly, he made it.

When I got back to where I was just below the top of the falls I thought I spied another possible lead. There was a possible chute up where the excess water had cut a channel, maybe I could climb it, and maybe I couldn’t.

I sized it up and searched for hand and foot holds. There were precious few but I literally hauled myself up the slippery section.

At the half way mark I was again defeated. Frustrated, disappointed, almost depressed. Sir Edmund would have been disappointed in me I thought.

The descent from there was frightening. One slip in the wrong place and I could have been killed; at the very worst suffered a broken limb. Fear gripped me but I made it.

Where was that track? After just under three hours I had to admit defeat. There was no clear way up.

I returned to the base of the second falls and rested. I glanced at where Michael and I had tried so desperately to find a route last year. I looked harder. Somehow, some way, I was drawn to the possibility that maybe there was a way up on the right. Perhaps a traverse across the rock face might be feasible. I couldn’t believe I was even considering it.

I had to admit one thing, I wasn’t a quitter.

Two thirds of the way up I noticed a moss covered set of tree roots. One area appeared to be slightly worn. I headed for it and crossed over them to see a narrow track of goat proportions on the other side. Could it be?

It led in the right direction and fitted the description I’d been given but it was on the wrong side.

At one point there someone had put a small section of wire so you could avoid falling into the ravine.

It was the best bit of wire I’d ever seen. 20 metres further on I reached the base of the third falls.

Had I taken a direct route from the carpark it would have taken me about 25 minutes all up yet I’d managed to thrash my way around for nigh on three hours just to get there.

It was a wonderful set of falls and, after taking some pics I pushed up the side and had an excellent view of the fourth set, though in reality they are just a series of cascades culminating in the third falls.

I stopped and had some lunch, some drink and reflected on how lucky I had been. Lucky not to have fallen in a few places, lucky I hadn’t been bitten by anything and lucky to have made it here, one of the special places I had been to in my travels.

About The AGONY And The ECSTACY (Mathinna Falls)