Ntumbachushi Falls (I’ve also seen it spelled Ntumbacusi Falls and Ntumbacushi Falls) seemed to be a waterfall in a transitional state when we saw it in May 2008.

The way we saw it, the Ngona River dropped over an escarpment in a pair of disjoint segments.

And we took separate walkways that led us to each of the segments of the waterfall.

Based on what the local guide Joseph said to us, during the Wet Season, this waterfall could widen in such a way that these segments would merge into a very wide and singular behemoth of a waterfall.

Each waterfall that we saw on our visit seemed to be similar-looking to each other.

The heights of each segment would probably be on the order of 15-20m tall by my estimation.

Each of the waterfall sections had enough volume to generate mist that felt quite good considering how hot this part of Zambia got.

Thus, as the Dry Season progressed, I could easily envision the Ntumbachushi Falls would get even thinner over time.

Nearly Missing Out On Ntumbachushi Falls

Although this waterfall was well signposted with infrastructure that was somewhat friendly and inviting to tourists, we almost didn’t get to see this waterfall.

The issue was that our safari vehicle had been stranded in the bush with a broken axle after we had visited Kabwelume Falls.

Only with the help of the local area guide named Joseph did we catch a taxi ride to this waterfall from the town of Kawambwa.

The local guide Joseph really seemed proud of his work as we explored the area on very well-developed walkways, which led us to the main waterfalls.

We first started with the first waterfall, which only required a few paces from the signed car park and trailhead, but we had to walk 2km from the turnoff where the taxi dropped us off since we didn’t have our a vehicle.

Soon thereafter, we took a separate track that backtracked away from the Ntumbachushi Falls before swinging around the other side of the creek and utimately arriving at the waterfall’s other detached segment.

On the way, I did manage to prick myself on a sharp, thorny bush that grew alongside the walking trail.

The pricking was significant enough to draw blood from me, and it made me concerned about any microbes that might have carried the risk of infections or diseases.

While the first waterfall we saw was in mostly shadow on the morning of our visit, this other segment made us look against the sun, which made photography trickier.

After having our fill of the Ntumbachushi Falls, Josepha encouraged us to go on some trails that went up the escarpment above the main waterfalls.

He said on the escarpment, there were more (albeit smaller) waterfalls, some rock art paintings, and some pools that were conducive to swimming.

It would’ve required us at least an hour round trip, but given our safari situation and the prospect of having to hitchhike back to Kawambwa, we opted to pass on that option.

That said, in hindsight, I did wish that we took the time to follow Joseph’s suggestion because it turned out that we had to wait a while for a pretty long time in Kawambwa anyways.

Ntumbachushi Falls resides in the Luapula Province near Kawambwa, Zambia. It is administered by the Kawambwa District. For more information or inquiries about the area as well as current conditions, you can try visiting their website.

From Kawambwa, our taxi drove west for the roughly 18km or so on the Kawambwa Road to an unsealed and well-signed turnoff to the left at the bottom of the escarpment.

The reddish dirt but well-graded road leads another 2km to the car park where several trails start.

I’m sure there are other ways of getting here from from other directions, but the approach from the east and north was how we did it given our rather adventurous circumstances.

It’s also said that Ntumbachushi Falls’ turnoff is also 22km from Mbereshi on the same Kawambwa Road coming in from the opposite direction.

As for context, the nearest big town to this falls was Kawambwa at about 18km (GoogleMaps says 90 minutes drive) to the northeast. Going in the opposite direction from Kasama, the falls was about 272km (GoogleMaps says 4.5 hours though I swear it took much longer than that) to the west. Kawambwa was said to be 970km north of Lusaka.

Fixated on the first part of the falls that we saw


Fixated on the second part of the falls that we saw 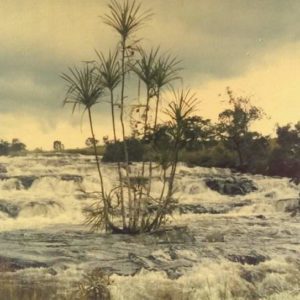 Ntumbachushi – Rainy Season February 2, 2021 5:34 pm by John Nicholls - Above the main falls are a series of cascades. Back in February 1987 (February is the last full month of the rainy season in Zambia) some of my friends and I visited the falls. Hope you like this photo. Love the vegetation. John ...Read More