The Archangel Cascades are a series of cascades sheeting their way down the hard sandstone bedrock as the Left Fork North Creek continued its way further downstream.

Like other similar pages in the Utah region, the waterfalls here were really my excuse at sharing the more epic adventure most people would come here for.

In this particular instance, it was the Subway (also known as Left Fork of North Creek).

In case you don’t know, the Subway is a spectacular semi-technical slot canyon in the Kolob Terrace section of Zion National Park.

They call it the Subway because the slot canyon featured sections that were hollowed out by flash floods into a tubular passage that very much would resemble a metropolitan subway.

The cascades featured on this page were merely side attractions to the funky formations that have made this slot somewhat famous amongst canyoneers.

Within the Subway formation, we needed to secure permits (which we obtained at the Watchman Campground’s Backcountry Office).

Actually, the hike was not easy as it was about 8 miles out-and-back including a steep descent down into the canyon carved out by the Left Fork of North Creek.

Plus, following the trail was not obvious at the river level because we had frequently lost the faint paths or the spots we were supposed to have crossed the creek.

On top of all that, we had to make the steep ascent up the same path that we had gone down earlier to get into the canyon.

But at least the trail was a bit more obvious to follow on the way back.

During the long hike and route-finding within the Left Fork of North Creek, we noticed some slabs of rock that had dinosaur tracks on them! That was really cool!

The constant presence of water also helped us deal with some of the warm temperatures during our April 2003 visit.

I can’t imagine how much more unbearable the conditions would be deeper in the Summer months.

We didn’t get to experience much of the Subway’s scenic features outside of its lowest extremes because we needed to have canyoneering gear.

That was too bad because I understand that the most scenic part of the Subway was a little further upstream from where we had to turn around.

As for the Archangel Cascades themselves, they were located a few minutes before the mouth of the Subway.

Although they weren’t terribly impressive, we did have to climb around and through parts of the cascades in order to keep going upstream.

Once we were inside the Subway slot canyon, that was when we found out that we needed some canyoneering gear to keep going upstream shortly after rounding the first bend within the slot.

Even if we had gotten into canyoneering, a good deal of preparation would be required as most canyoneers would’ve done this as a one-way through hike going in the other direction.

The Archangel Cascades reside in Zion National Park near Springdale in Washington County, Utah. It is administered by the National Park Service. For information or inquiries about the park as well as current conditions, visit their website.

The Archangel Cascades and the Subway are along the so-called Kolob Terrace part of Zion National Park.

Coming from Los Angeles, we’d drive east to the I-15 then northeast all the way to St George (about 5.5 hours drive without traffic or under 2 hours past Las Vegas).

Just north of St George, we’d then drive east on State Highway 9 and take it for about 27 miles (a little over 30 minutes) to the town of Virgin.

Note that from Springdale (a town right at the south entrance of the main part of Zion National Park that we usually stay at whenever we spend a night or more in the area), Virgin would be 18 miles or roughly 20 minutes drive to the west along Hwy 9.

From Virgin, we’d then leave the Hwy 9 and drive north along the Kolob Terrace Road (or Kolob Reservoir Road).

We’re only focusing on the Left Fork Trailhead since that’s the way we did it.

So on Kolob Terrace Road, we drove about 8 miles north to the well-signed Left Fork Trailhead. 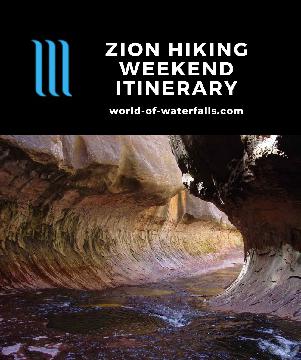