Bear Creek Falls was an impressively tall waterfall hidden in plain sight underneath the famed Million Dollar Highway just to the south of the scenic town of Ouray.

Ironically enough, just on the other side of Telluride Peak by the town of Telluride (about 10 miles as the crow flies) was another Bear Creek Falls, but they are not the same.

Anyways, according to the contour lines on my Gaia GPS map, this waterfall featured a 120ft drop beneath the Hwy 550 before joining up with the Uncompahgre River.

The picture that you see above was how we saw this waterfall late in the season in mid-October 2020.

We actually had an opportunity to stop and experience this waterfall on a road trip three months earlier where it would have had much better flow as evidenced by the number of people we saw around there.

Unfortunately, for some reason, we didn’t bother stopping for it, and it was one of my regrets on that trip.

We didn’t even have an excuse not to do it (other than we hadn’t planned on stopping for it since we weren’t aware of it prior to the trip), especially since it was roadside with a fairly spacious pullout next to the overlook.

Next to the fairly spacious pullout were some interpretive signs as well as an overhanging lookout peering right down at the Bear Creek Falls.

This lookout also yielded us a view further along the steep Uncompahgre Canyon towards Abrams Mountain as well as a seasonal waterfall on Ralston Creek directly opposite the canyon.

As far as lighting is concerned, I’d imagine that afternoon would be the best time since this waterfall faces west, but our visit happened in the early morning so we didn’t have to look against the sun.

Bear Creek Falls resides in the Uncompahgre National Forest just south of the town of Ouray in Ouray County, Colorado. It is administered by the USDA Forest Service. For information or inquiries about the area as well as current conditions, visit their website.

Basically, we’d look for a pullout on the right side of the road not long after passing through a small arch or road tunnel as we headed south from Ouray (pronounced “YOUR-ay”).

The pullout itself may have room for about a half-dozen cars or so.

It seemed like this was the most obvious parking spot, and I’d imagine it can easily get full.

I’d imagine that most visitors who stop at this pullout only check out Bear Creek Falls for a few minutes and then leave. Therefore, the turnover should be high.

However, there’s also the Bear Creek Trail nearby, which can be pretty lengthy. And if people use this pullout for that trail, then I can imagine how that can limit parking for this waterfall even more.

Top 10 Best Waterfalls in Colorado & How To Visit Them 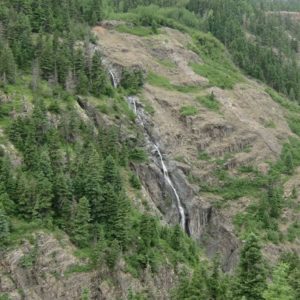