Grand Falls was certainly one of the most attractive waterfalls that we’ve seen in the US (let alone the American Southwest region).

What made this proclaimed 181ft waterfall so attractive was its width combined with the multiple terraces before plunging in three tall leaps.

In addition to the waterfall’s dimensions, the surrounding scenery seemed to be a microcosm of the mighty Grand Canyon itself as we were literally looking into a mini-gorge with intriguing Grand Canyon-like cliffs.

And like the mighty Colorado River, the Little Colorado River possessed a muddy color which gave this waterfall its chocolate-like appearance.

With some imagination, this waterfall could’ve appeared in Willy Wonka’s Charlie and the Chocolate Factory movie given its “Chocolate Falls” characteristic.

We even included it on our Top 10 Best USA Waterfalls List at one point in time (before our waterfalling survey expanded to more states)!

Conditions for Grand Falls to put on a show

However, with all the superlatives we’re throwing at this waterfall, there are a pair of caveats.

First, we had to time our visit for the narrow window of March through April and possibly May depending on how much snow had been accumulated in the White Mountains, which drained into the Little Colorado River.

Otherwise, the falls would quickly trickle until going dry for the rest of the year except for a brief revitalization from the thunderstorms of the Summer monsoons.

On a subsequent visit to Grand Falls in late March 2018, we also proved that even the snowmelt months are no guarantee of its flow.

For on that visit, there was no water going over the waterfall, and instead, there were only a few standing pools of water at its base.

So the bottom line is that the snowpack on the White Mountains must be significant enough to feed the Little Colorado River, and only then would timing a visit for the snowmelt come into play.

The second caveat was that we had to figure out how to find this waterfall (see directions below).

It wasn’t exactly a well-signed attraction, and we were glad that we used a combination of a GPS with TOPO! map

to help us out (though it did lead to a little bit of confusion as the map had some outdated road lines).

Once managed to find the parking area, we were at the top of the Grand Falls.

We noticed a handful of lookout gazeebos perched right at the cliff’s edges providing various angles of the impressive falls itself as we walked around the rim of the gorge that the falls plunged into.

As we got towards more frontal views of the falls from the gorge rim, we noticed that there was a rather informal and somewhat hidden black-sand pebbled path where some minor scrambling was required to get into a gully that was further downstream of the falls.

That gully would ultimately lead us to the banks of the Little Colorado River.

And it was here where we would eventually get right across the river from the front of the falls, where we could feel the spray of the attractive Grand Falls while seeing rainbows in the process.

The scrambling wasn’t too bad as we merely needed to take our time to ensure we weren’t careless in trying to shortcut dropoffs.

And if we recognized that we might have gone the wrong way, then we’d backtrack and find a more sane path instead of forcing a leap of faith down a dropoff.

Nevertheless, the path was reasonably doable for us and wasn’t as scary as say the Mooney Falls descent in the Havasupai Reservation.

Once we were at the bottom, we even witnessed some people scramble up behind one of the side tiers of the falls after negotiating a real muddy stretch drenched by the falls’ spray.

Julie and I didn’t bother doing that as we didn’t feel like traversing the muddy stretch and incurring additional risk at scrambling up the cliffs towards the middle tiers of the falls.

Indeed, we were pretty content with the waterfall experience just from the relative safety of the view from across the river.

Finally, despite the unsigned nature of this attraction, it was still quite popular as we shared it with at least a half-dozen carloads of people or so.

We suspected many were locals though (either from Flagstaff or from the Navajo Reservation), or they were tourists who looked for gems like this off the internet. 🙂

Grand Falls resides in the Painted Desert near Flagstaff in Coconino County, Arizona. It is administered by the Navajo Nation. For information or inquiries about the area as well as current conditions, you can visit their official government website.

It turns out that we could have taken a couple of different ways to reach the Grand Falls.

Then, we’ll then describe the alternate route.

The Signed Route to Grand Falls

Starting from Flagstaff, we drove east on the I-40 until we reached the exit 211 for the Winona Road (near the town of Winona).

From there, we turned left to go over the bridge, then followed the Winona Road for about 2.2 miles before turning right onto Leupp Rd.

We then followed the Leupp Road for about 14.5 miles.

On our latest visit in 2018, there was a sign indicating that Grand Falls was the next left turn (which can be easy to miss given how fast cars can go on the Leupp Road).

On our first visit in 2009, that sign wasn’t there and we took the unsigned turnoff shortly after the pavement changed (indicating we were now on Navajo Tribal Lands; there was a Grand Falls Bible Church sign near this turnoff).

At this point, we were now driving on the unpaved Indian Road 70 (also referred to as Bia-70 on maps).

It was a fairly wide but bumpy washboarded road, which we kept on for about 8 miles.

Note that about 7 miles after leaving Leupp Road, there was a junction with the Bia-6910 Road coming in from the right.

There was an unsigned turnoff on our left that led the final 0.4 miles to the parking and picnic area for the Grand Falls.

Overall, this drive took us about 45 minutes or so.

If you happened to miss this turnoff and reach the ford of the Little Colorado River (roughly another 0.4 miles past the correct unsigned turnoff on the left), then that’s a good indicator that you went too far.

On the return route, instead of taking the Indian Road 70 back to Leupp Road, we kept left at the fork and gave the Bia-6910 Road a try.

Although this route was a little bit longer than the Bia-70 Route (by about a mile), the Bia-6910 Road had a harder, packed surface and thus was not as subject to bumpy washboards as the Bia-70 Road.

We would eventually make it back to the Leupp Road roughly 5 miles east of the Bia-70 Road turnoff.

We didn’t notice any signage suggesting that the Bia-6910 Road was just as valid as the Bia-70 Road leading to the Grand Falls.

So if you’re unsure, you can do as we did and follow the signs leading us to the Bia-70 Road, then return via the Bia-6910 Road.

Sweep along the tops of each tier of the impressive waterfall 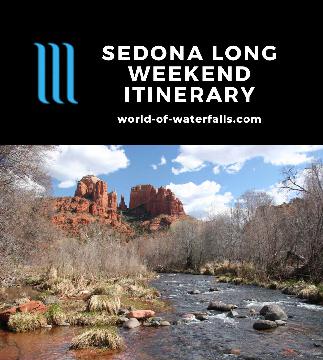 Dirt Spray May 19, 2017 1:13 pm by Joe Budd - I was at the Grand Falls of the Little Colorado in 1984 at a time of heavy water flow. We parked at a small picnic area just down from the Falls and walked up to admire the huge chocolate-like flow over the cliffs. When we got back to the car later we found that the… ...Read More

Pleated (above Grand Falls) October 30, 2012 3:30 am by Abe - Above the main falls the muddy river forms what appear to be curvy curtain pleates all the way across the river in levels making drops of a few inches in several drops. Unique feature to this falls. ...Read More

Went April 11, 2011 April 15, 2011 6:48 am by Robert Mayhall - Was only flowing at about 20 percent but was still amazing and it is a lot bigger when u see other people standing on the other side. It really puts the size of it in perspective. ...Read More