Helen Hunt Falls was our introduction to the waterfalls in the Colorado Springs area, and it was quite easy to visit.

It was essentially a modestly-sized two-segment cascade on North Cheyenne Creek dropping about 36ft in total height.

There was a visitor center building there, but I’d imagine that it was open seasonally as it wasn’t open during our late afternoon visit in late March 2017.

Given how easy this visit was, our daughter had quite a bit of fun here.

She played near the water at the base of the falls, and she interacted with some locals visiting with their dogs.

During our visit, North Cheyenne Creek seemed to have fairly average to less-than-average flow, which was surprising to us considering it was early Spring.

Even though most of California had been getting much higher than average rainfall in the Winter, apparently this part of the Rocky Mountains didn’t get as much of that precipitation.

Thus, I’d imagine that had the area not gotten any more precipitation, the falls could go dry in the Summer once the snow pack had been depleted.

Nevertheless, our visit only took us less than 30 minutes.

This encompassed lingering around the base of the Helen Hunt Falls and hiking up to the bridge above the falls.

Julie talked me out of doing the Silver Cascades Trail further beyond the top of Helen Hunt Falls as we were short on time.

That said, I did see an attractive cascade a short distance further upstream from where I turned around.

According to the signs, that trail’s length was said to be about 1/3-mile in each direction with about 275ft of elevation gain.

That elevation gain can hit you if you’re not already acclimated to the elevation of Colorado Springs at about 6,000ft as well as the dry climate.

Who was Helen Hunt?

While it was easy to think of the name of Helen Hunt Falls in terms of the actress Helen Hunt, I learned that the waterfall was named after writer Helen Hunt Jackson.

She lived in Colorado Springs later in her life in the 19th century, and she was eventually buried here.

In addition to writing works inspired by the scenery of the Colorado Springs area, she was also an advocate for Native American rights.

Her stance was quite revolutionary at the time given the history of Native Americans during an era when land was being seized from the various tribes throughout the 18th and 19th centuries.

In fact, her most notable work titled Ramona

was said to be about the mistreatment of Native Americans in Southern California.

Given Hunt’s contrarian stance, she often published anonymously to get her voice heard while minimizing the anticipated backlash from speaking out.

Finally, in case you don’t know who the actress Helen Hunt was, she starred in the sitcom Mad About You

, As Good As It Gets

Helen Hunt Falls resides in the North Cheyenne Canyon Park near Colorado Springs in El Paso County, Colorado. It is administered by the City of Colorado Springs. For information or inquiries about the area as well as current conditions, visit their website.

While there were many ways to drive to Helen Hunt Falls from various spots in the Colorado Springs area, we’ll just describe the way we did it from around downtown Colorado Springs.

So from the I-25 exit at Tejon Street (exit 140) a few miles south of downtown Colorado Springs, we turned right at the next traffic light at the off-ramp.

We then followed Tejon Street for about 0.4 miles to its junction with West Cheyenne Blvd.

We then turned right to go onto North Cheyenne Canyon Road and followed this narrower road for about 2.6 miles to the obvious parking lot in front of the Helen Hunt visitor center, where the waterfall could clearly be seen already.

Overall, this drive took us about 20-25 minutes to get from the Rockrimmon Blvd ramps along the I-25 (near the Hyatt House where we stayed) to this part of North Cheyenne Canyon Park.

For further context, Colorado Springs was about 71 miles (or over an hour drive without traffic) south of Denver along the I-25, or about 97 miles (around 90 minutes drive) south of Boulder. 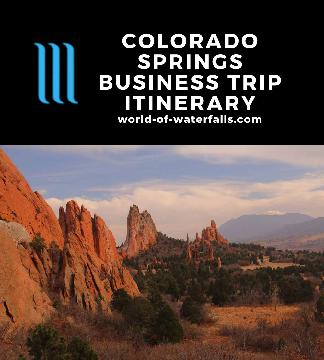 Top 10 Best Waterfalls in Colorado & How To Visit Them