Mooney Falls is the tallest of the Havasupai Reservation waterfalls. It’s said to plunge some 190ft in a tall singular column amongst some ominous-looking travertine stalactites.

Unlike Havasu Falls, this waterfall was a little harder to access and view given its somewhat enclosed position.

It turned out that in order to start getting better views of the falls, we had to brave our fear of heights.

This waterfall was the third of the major Havasupai Waterfalls that we encountered during our November 2002 trip.

It sat at the far end of the primitive campgrounds about a mile from the base of Havasu Falls or three miles of hiking from Supai Village.

Since Julie and I stayed at the Havasupai Lodge in the village of Supai, the six-mile round trip day hike with the threat of bad weather was sufficient for us.

Given that Mooney Falls is basically an extension of the Havasu Falls hike, visit that page for the trail description up to Havasu Falls.

About the steep descent to the base of Mooney Falls

The hike leading up to the top of Mooney Falls was pretty straightforward.

However, continuing on was when the hike became a memorable adventure as we were then faced with a steep cliffside descent with lots of drop-off exposure plus a pair of tunnels in order to reach its base.

It was a pretty scary experience, but it turned out that as long as we took our time and made slow but sure progress during this cliffside descent, it looked worse than it really was.

Speaking of the cliffside descent, I had read that the waterfall was named in 1883 after prospector D.W. “James” Mooney.

He died while attempting to find a way down to the waterfall’s base (as if that hadn’t already undermined my confidence to do that part of the hike prior to our trip).

Apparently, he tried to climb down the falls with the aid of rope, but the rope wasn’t long enough so he basically hung there exposed to the elements until his death.

The story then went on to say that a Native American was found wearing Mooney’s boots the day after Mooney himself died.

He managed to show Mooney’s remaining party how he got down to Mooney’s lime-crusted body through a cliff-side descent involving a pair of natural tunnels (sound familiar?).

The prospectors had since widened the tunnels and the current “trail” to the base of the waterfall pretty much followed that same path.

While still on the topic of that scary descent, we discovered during our trip that the cliffs and ladders towards the base of the descent was wet from the mist of the waterfall.

Thus, the footing and our grip on both the chains and ladders were not as secure as we would have liked due to the slippery conditions.

It was a good thing we were wearing good hiking boots at least, but I could easily see how this part could be conducive to a pretty bad spill with one slip.

Beyond the base of Mooney Falls

Once we got to the base of the falls, we were able to hike further downstream until we got to a fairly deep-looking crossing of Havasu Creek.

This crossing was roughly a mile or less from the base of the falls, but when we turned back and headed back to Mooney Falls.

We noticed there were smaller cascades downstream from the main falls caused by the travertine dam deposits so common along Havasu Creek.

I recalled in one instance, we had a pretty nice view of these smaller cascades fronting the larger waterfall itself while the viewpoint was flanked by a few stalks of cacti.

Apparently, the waterfall used to have a thicker column than the long column you see in the photos on this page.

This change in characteristic was probably due to flash floods (most notably the powerful flash flood event of August 1997) that tend to alter the Havasu Canyon landscape.

In this case, the floods knocked out some of the travertine deposits that enlarged the width of the falls at its top.

Julie and I would be keen to see how much the 2008 flood event changed this waterfall and the cliffside descent.

Had we crossed Havasu Creek and persisted further downstream, we were aware that we could have reached Beaver Falls and eventually the confluence of Havasu Creek with the Colorado River.

Those would make for much longer day hikes from either the Havasu Campground or Supai Village (at least 8 miles return from the campsite to Beaver Falls).

So, we’ll have to wait for our next opportunity to come back here to explore Havasu Canyon more fully.

See the Havasu Falls page for a brief description on getting to the trailhead by car as well as the hike to get to Supai Village and Havasu Falls itself.

The trailside descriptions given on this page continues beyond Havasu Falls.

For context, the hiking begins from the Hualapai Hilltop, which is roughly 60 miles from Peach Springs. Peach Springs is about 50 miles northeast of Kingman along the I-40. 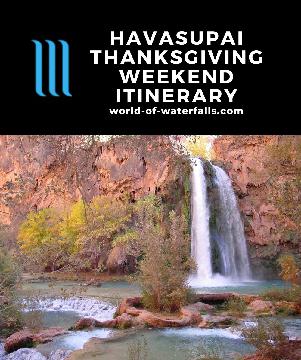 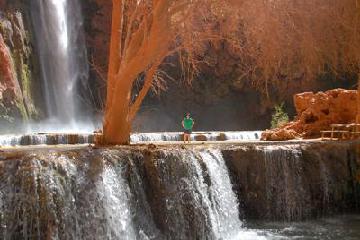 Mooney Falls, Arizona was our Favorite April 6, 2010 9:16 pm by Ron Andrews - We hiked to Havasu Canyon last week. The entire trip was full of stunning scenery, but Mooney Falls was our favorite. One has to work a bit harder for Mooney Falls. It is 3-4 miles from the village. The climb to the base of the falls is challenging, but doable for a couple in our… ...Read More