Stewart Falls (also called Stewarts Cascade) was definitely one of the more popular waterfalling excursions within the vicinity of Salt Lake City.

And it was for good reason why the falls was so popular.

After all, it featured a reportedly year-round flow on the backside of Mt Timpanogos while plunging over 200ft in a pair of drops.

The drops consisted of a giant main plunge followed by a smaller but gushing lower tier.

Its popularity was evident both times I have hiked to this waterfall as its base was accessible and a magnet for people cooling off in its stream as well as its spray.

Indeed, when I showed up on a warm Sunday afternoon during Memorial Day Weekend in 2017, there were scores of people that were either at the waterfall’s base or occupying its narrow trail.

When I came back to visit on a Monday morning in mid-August 2020, there were still lots of people both on the trails and at the waterfall enjoying the beautiful weather.

During the first visit, I learned the hard way that afternoon wasn’t the best time to visit Stewart Falls because it was east-facing.

So when I came back three years later, I made sure to visit the falls in the morning, and sure enough, I experienced the waterfall with beautiful morning backlighting.

That said, the latter experience was such that the falls had a much lighter flow as the snowpack was mostly depleted that deep into the Summer.

It turned out that there were at least a couple of different ways to do this hike – one starting from Aspen Grove and the other starting from the Sundance Resort.

Both times I’ve done this hike, I’ve done it from the Mt Timpanogos Trailhead by Aspen Grove (see directions below).

The main reason why was because this trailhead was on National Forest Land so it was accessible to the public.

According to the signs, this hike was around 3.6-3.8 miles round trip to reach the bottom of Stewart Falls, and my GPS logs pretty much confirmed it.

The trip logs also indicated that this up-and-down trail gained about 760ft in elevation as well as lost 750ft in elevation, which I had to get back on the return hike.

On my first visit, it took me about 2 hours total to do the hike.

On my second visit, I lingered a bit longer and explored a little more around Stewart Falls, so I wound up spending 2.5 hours away from the car.

In any case, I saw many families from elders to kids with reasonable fitness doing this hike so I figured that it made for a great family outing despite the moderate difficulty.

The Sundance Resort approach involved riding a chairlift (which costed my wife and my daugher $42 total as of August 2020 and didn’t run until 11am that day).

They then took it to the Ray’s Summit where they learned that it was a 1.5-mile hike down to the waterfall before continuing another 1.5 miles the rest of the way down to the Sundance Resort.

Given the cost of the chairlift, the limited schedule, and the minimal distance saved by doing this option, I’d argue that the Sundance approach was really more for people staying at or visiting the resort.

Either that, or it might be an option for people who had difficulty finding parking at the public lots at Aspen Grove.

We didn’t do that hike so we don’t have a trail description for doing Stewart Falls in this manner.

That said, we did notice lots of “Private Property” and “No Stewart Falls Access” signs throughout the Alpine Scenic Highway between Sundance and Aspen Grove.

So that indicated that this hike was only meant for resort guests, and the only benefit of the chairlift was that it was a mostly downhill hike.

From the busy Mt Timpanogos Trailhead, the trail began just past a toilet facility with some trail signage.

It initially meandered to the southwest in more or less level terrain before the trail started to round a bend with a partial view of the Primrose Cirque in the distance.

Then, the trail then started its narrow climb in earnest, which persisted for the next mile or so.

The trail more or less hugged a ledge as it followed the mountainous contours providing glimpses of the valley and surrounding mountains cut forth by the Northern Fork Provo River.

The pace of the hike was a bit herky-jerky because I often stopped to let people going in the opposite direction pass through.

At the same time, I found myself being caught behind slower hikers with limited opportunities to pass.

This was made even trickier when you consider the high volume of foot traffic in both directions as well as the COVID-19 pandemic where I tried to respect the social distancing.

Eventually, the climb topped out as the tree cover briefly gave way to a clearing where many trees and shrubs were mysteriously bent in the downhill direction (to my left).

I suspected that the bending vegetation might have been caused by avalanches as this clearing was well-within range of some neighboring mountains that could have easily spawned the unstable snow.

On my mid-August 2020 visit (three years later), I noticed that more trees and shrubs have grown here and concealed a lot of the bent foliage (though some were still around).

Beyond the apex of the climb, the trail then began a pretty long descent that initially passed through more forested sections providing some welcome shade to provide a little relief from the intense sun.

As the trail eventually made a turn (at roughly 1.3 miles from the trailhead), that was when I finally got my first glimpse of Stewart Falls and the accompanying Stewart Cascades.

The Stewart Cascades looked like other tall cascades blending in with the snow that was still present on my first visit in late May 2017.

However, on my mid-August 2020 visit, the snow was less prevalent and the waterfall seemed to jump out a little more against the scenery.

The views from here also allowed me to look in the downstream direction towards the Sundance Resort area.

Anyways, the trail continued descending along a somewhat narrow ledge as it would eventually reach a rocky outcrop looking right at the Stewart Falls.

This was at about 1.7 miles from the trailhead.

The final descent was on a narrower but still well-used path as it would eventually deposit me right at the base of Stewart Falls.

There was also a trail coming up from the left that hooked up with both the Ray’s Summit Trail as well as the descent to the Sundance Resort.

Exploring the base of Stewart Falls

During my first visit to the base of Stewart Falls, I was looking up against the early afternoon sun, which conspired to make taking photos a difficult task.

So learning from that observation, when I came back three years later, it was during the morning when the sun was behind me.

For most people, it was enough to enjoy the creek as well as the spray from the lower drop of the waterfall.

However, I noticed that there was also a very steep and informal scrambling “trail” that quite a few daring folks ascended to reach a ledge at the base of the upper drop of Stewart Falls.

While there was a direct climb on an eroded slope to get up there, I found it slightly easier to climb up a more vegetated and rocky “path” more to the left (closer to the waterfall).

No matter which approach was taken, I had to exercise a lot of caution, especially since it was easy to kick down rocks to unsuspecting people below.

And I was aware that coming back down was also going to be tricky for the same reasons.

Eventually, I reached a narrow ledge with dropoff exposure that ultimately brought me back to the Stewart Falls’ upper drop.

However, the terrain here was quite sloped and uneven, so it wasn’t exactly a great chill-out spot.

Nevertheless, the views from here were different, and it was also nice to get a closer look at the wispier upper drop.

After having my fill of the falls, I then had to hike back the way I came as I now had to make a pretty long climb to get back to the avalanche zone.

Only after that avalanche zone would the trail then made a final descent to the Mt Timpanogos Trailhead.

Stewart Falls resides within the Mount Timpanogos Wilderness in the Uinta-Wasatch-Cache National Forest near Provo in Utah County, Utah. It is administered by the USDA Forest Service. For information or inquiries about the area as well as current conditions, visit their website.

To reach Stewart Falls from downtown Salt Lake City, we went west towards one of the on-ramps for the I-15 heading south.

Leaving the I-15 and heading east on Hwy 52, we then drove for roughly 4 miles before keeping left to join the Hwy 189.

Once we were headed northeast on the Hwy 189, we drove for roughly 7 miles passing through Provo Canyon to the first left turn beyond the tunnel (Alpine Loop Scenic Byway or Hwy 92).

Once on the Alpine Loop Scenic Byway, we then drove up this mountain road for the next 4.5 miles or so into the Aspen Grove community.

We then continued driving on Hwy 92 towards a kiosk, where we showed our National Parks Pass (or paid $6 per vehicle), and the Mt Timpanogos Trailhead was the first parking lot on the left.

Overall, this drive would take about an hour.

Note that the Sundance Resort was about 2.5 miles from Hwy 189.

Sundance Resort was an alternate starting point for Stewart Falls, where the hike could begin from the end of a chairlift to take out a good chunk of the elevation gain.


Brief sweep from the bottom of Stewart Falls 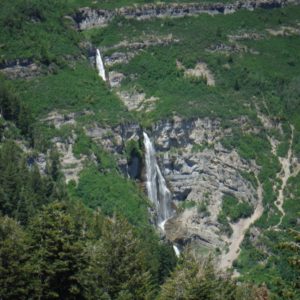