The Zion Canyon Waterfalls are more typically the ephemeral types that don’t last much longer than a few days after heavy rain.

However, since afternoon thunderstorms occur frequently during the monsoon season of mid to late summer, there’s a good chance you’ll see these falls if you’re here during that time.

On the other hand, we were fortunate to see these waterfalls in mid-March during a Spring rain storm that made these falls come alive.

But like I said, timing is everything and thus we believe most of these waterfalls marginally count as legitimate due to their lack of reliability of flow.

Some of the more prominent waterfalls that we noticed that had a little more staying power than the come-and-go ephemeral ones included a trio of waterfalls at the Emerald Pools.

The Lower Emerald Pools (the lower waterfalls shown in the photo above) featured waterfalls dropping over parallel segments.

The attractive 300ft waterfall at the Upper Emerald Pool shot out of a narrow notch in Zion Canyon.

In order to experience these waterfalls and pools, we did a hike of 2.5 miles round trip, which also could be done as a slightly longer loop hike.

Alternately, if we had just done the Lower Emerald Pools, it would’ve been 1.2 miles return.

The walk was pretty easy and the only real concern would be drop off hazards from getting close to the edge of the brink of the waterfalls at the Middle Emerald Pools (which spills into the Lower Emerald Pools).

We also witnessed a gorgeous tall waterfall at the Temple of Sinawava, which also put on a show under wetter times.

Anyways, this web page was my excuse to showcase and celebrate the beauty of Zion Canyon in addition to some of the waterfalls that can be found within the main part of Zion Canyon if the timing’s right, of course.

The Zion Canyon Waterfalls reside in Zion National Park near Springdale in Washington County, Utah. It is administered by the National Park Service. For information or inquiries about the park as well as current conditions, visit their website.

The nearest town to Zion Canyon is Springdale, which is right at the south end of Zion National Park.

We usually base ourselves in town or at the Watchman Campground, which is near the park’s southern entrance.

So you would have to use one of the frequent park service shuttles to go from stop to stop within the canyon.

Within Zion Canyon, the Emerald Pools is pretty straightforward to find as it’s not too far from the Zion Lodge.

Ordinarily though, the mandatory peak season shuttle would point out the stop corresponding to this hike.

The end of the road would be at the Temple of Sinawava and its ephemeral waterfall, which is also where the Riverside Walk begins.

If you could count Weeping Rock as another waterfall, it too has a stop that’s pointed out by the shuttle that’s a few stops before the Temple of Sinawava.

Starting near the Weeping Rock, we actually did an interesting hike into Hidden Canyon from here, where we found a small natural arch.

Sweep from behind the waterfalls at the Lower Emerald Pools


The waterfall spilling into the Upper Emerald Pool 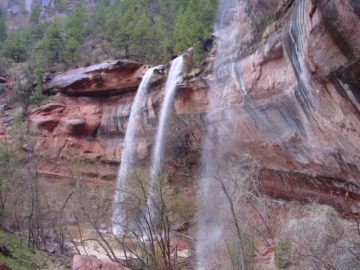 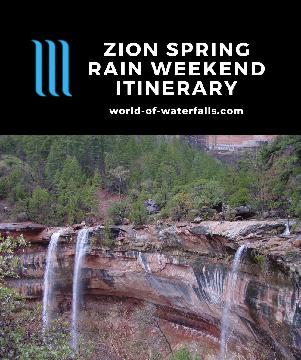 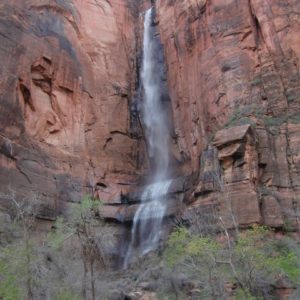