That’s because it was within a day trip from the charming Portugese-influenced town of Panjim or Panaji in the state of Goa.

Julie and I could corroborate this claim because there were scores of foreign tourists when we visited this place in November 2009.

Anyways, the waterfall came tumbling down a mountainside crossed over by an arched bridge supporting the South Central rail line.

At the waterfall’s base, there was a plunge pool that we noticed was a hit with tourists wanting to swim to cool off from the high heat and humidity of this part of the country.

The name of the falls was said to mean “ocean of milk” due to the white water appearance as the water would make its tumble.

That said, I have to believe that the Hindu influence probably also played a role in the name of the falls considering Hinduism’s reverence for cows.

I’ve also seen this waterfall referred to as the “Milky Waterfall” as a result.

As far as experiencing the Dudhsagar Falls, it was possible to experience it in a couple of ways.

The most popular way of doing it (and the way we did it) was on an organized day excursion.

We first had to head east from Panaji or Old Goa (see directions below) to get to a little village called Molem (I’ve also seen it spelled Collem) where we then switched vehicles.

After doing the switch, we rode a 4wd jeep down a rugged track that included crossings of the Mandovi River to get right to an area that allowed us to access the pool at the base of the Dudhsagar Falls.

During our visit, we were joined by heaps of other tourists (mostly European though we were quite surprised at the quantity of Russian tourists).

In addition to people, there were also monkeys (which I believe can be either macaques or rangoons) who seemed to have become dependent on the food fed by the tourists in spite of the signs discouraging this practice.

While we were at the jeep drop off area, there was a basic viewing platform to see the upper two tiers of the Dudhsagar Falls between an opening in the foliage.

However, we then took a short 10- or 15-minute walking path with a bridged river crossing that led us right to the base of the falls.

That was where it was very crowded with tourists clad in bathing attire as well as monkeys, local guides, and a rather ominous sign listing the names of people who had drowned here.

Our local guide did show me an interesting little alcove or “cave” not too far to the left side of the Dudhsagar Falls.

This was significant because apparently it was a favoured den of some tigers who take shelter from the rains here during the monsoon.

Of course, that would also be when the falls would be inaccessible to most people given the likelihood of flooding and mud on the 4wd road to get here.

That said, I wondered if he was merely showing this tiger den to me in an attempt for me to give more tip to him (I never asked for it, nor did I ask him to guide me).

As for getting decent views of the Dudhsagar Falls itself, we weren’t able to achieve very satisfying views from the bottom given the sloping nature of the falls.

Perhaps the best views from the base were more set back from the plunge pool where the whole context of the falls could be seen.

The closer we got to Dudhsagar Falls, the less of its top we were able to see.

It turned out that the best views of Dudhsagar Falls (albeit fleeting, I’d imagine) were from across the forested ravine on the Konkan Railway some 10km from the Kulem Station.

Seeing the falls this way was the second method of experiencing it.

Unfortunately, we weren’t able to exercise this option given time constraints.

Also, there was apparently a fairly difficult hike up to a similar viewpoint from the official trail of the falls.

However, the local guide I conversed with here said we needed permission in order to do the 1.5-hour each way trek through steep terrain, high humidity, and dense jungle to get there.

Timing A Visit to Dudhsagar Falls

As for timing a visit to Dudhsagar Falls, the base of the waterfall would be most accessible outside of the monsoon due to the lower likelihood of flood.

Given that the jeeps that we rode on to access the trailhead of Dudhsagar Falls required river crossings, it’s understandable why this was the case.

Nevertheless, the falls would be at its most impressive during the monsoon, but that would also be when the 4wd road would become impassable.

Under those circumstances, viewing the Dudhsagar Falls by train would be the only other option left at this time.

As you can see from our photos on this page, we visited outside the monsoon so clearly the falls had seen better days.

The Height of Dudhsagar Falls

Finally, there was quite a bit of false information regarding the height of Dudhsagar Falls.

I suspect that it was either started or fanned along by the 603m claim given in our 2007 edition of Lonely Planet: India

However, I wondered if they had a typo and really meant to say it was 306m tall.

As a result, I think we could put to rest any notion that this was one of the tallest waterfalls in the world (it was clearly not the case).

Then again, I also saw some other claim Dudhsagar Falls was the second tallest waterfall in India, which seemed more plausible.

However, I suspect someone will come up with other waterfalls boasting heights that would probably dispute even this claim.

Dudhsagar Falls resides in the Bhagwan Mahaveer Sanctuary and Mollem National Park near Panaji in the South Goa District of Goa State, India. It is administered by the Government of Goa Department of Forest. For information or inquiries about the area as well as current conditions, you can visit their website.

From Panjim or Panaji (the capital of Goa), we were driven some 60 or 70km east to a village where the 4wd part of the excursion to Dudhsagar Falls began.

It took us about 2 hours on the road to get there.

And during the drive out east, we passed by some churches and cathedrals of Old Goa while contending with lots of lorries hauling iron ore and manganese among other things (suggesting there must be some serious mining going on in this part of the country).

When we switched onto a rugged 4wd jeep which did the final leg to the Dudhsagar Falls at Molem (or Collem), we had to traverse very bumpy roads with a handful of deep river crossings.

I recalled one or two of these river crossings were deep enough to let water inside the jeep!

At the end of the road, we were dropped off at the fairly busy jeep parking area.

All told, the day excursion from Panjim or Panaji was about 6- to 7 hours total.

We flew to Panaji from Mumbai, which took us about an hour to traverse the 579km or so (10 hours drive). Mumbai was a two-hour flight from Delhi. 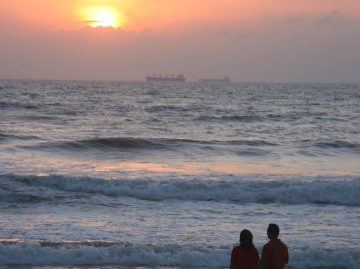 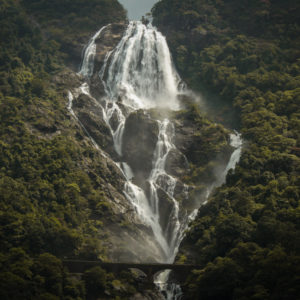