Nohsngithiang Falls was sometimes referred to as the Seven Sisters Falls due to the presence of several strands of cascades coming down in parallel.

However, I presume some guy envisioned there were seven of them during the monsoon as Julie and I didn’t see much of the waterfall during our November 2009 visit.

By the way, this shouldn’t be confused with the similarly-named Seven Sisters in the Geirangerfjord of Norway.

As shown in the pictures on this page, we noticed that this waterfall had a rather short life since we showed up barely a month after the “official” end of the monsoon in the northeast of India.

I reckoned we would’ve had to have been here right during the monsoon in order to see the falls under more impressive flow.

It also didn’t help that 2009 had an abnormally weak monsoon, which the locals we’d been in touch with blamed it on Global Warming.

Now had we shown up during the monsoon during the most optimal time to see the falls in its highest volume, then we would’ve likely had to contend with the increased likelihood of clouds making the falls harder to see.

Indeed, such timing was a bit of a catch-22 where you can’t seem to make any guarantees of a good viewing one way or the other.

In any case, the optimal time for a visit should be between late September or early October, which is in the latter part of the monsoon season.

In addition to the contextual views from across the ravine draining towards Bangladesh, we were also able to get right up to the top of the Nohsngithiang Falls.

And from that vantage point, there was the so-called Missing Waterfall, which was nothing more than the watercourse disappearing into a narrow slot chasm in the ground before re-emerging as part of the Seven Sisters Waterfall.

There was a separate dedicated car park and section to experience the Missing Waterfall from this spot peering right into a grate preventing people from falling into the hole.

From the same vantage point for this waterfall, we also noticed a distant but tall waterfall that was also lightly flowing.

I wasn’t able to recall whether it was part of the Nohsngithiang Falls from a different vantage point or if it was a different waterfall entirely.

I guess I was hard to tell either way given the relative lack of signing to help identify what we were seeing in the general area.

Nohsngithiang Falls resides near Cherrapunji in East Khasi Hills District of Meghalaya State, India. It is administered by the Sohra Civil Sub-Division. For information or inquiries about the area as well as current conditions, you can visit their website.

We were a little bit disoriented once we got into Cherrapunjee or Sohra since we were being escorted everywhere we went.

However, I recalled we didn’t have to go far (maybe less than 10km) from town to get to both the distant informal viewing area plus the top of the Nohsngithiang Falls.

From Shillong to Cherrapunjee was roughly 53km, which took us about 90 minutes since we had to contend with slower moving trucks holding up traffic.

For geographical context, Shillong was 99km (2.5 hours drive) south of Guwahati. Guwahati was about a 2.5 hour flight from Delhi. 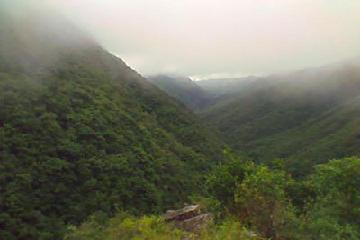 Paradise on earth October 9, 2010 5:46 pm by Priyabrat Rath - I have been to this place along with my parents on 19 Sep 10. I have never seen such a beautiful and cool place any where. I had been at J&K, Himachal and Ooty, but it is exceptionally different from others. The local population is as cool as the environment. A little government attention needed… ...Read More