Sathodi Falls (pronounced “sat-HO-dee”; I’ve also seen it spelled Sattodi Falls) was a classically shaped rectangular 15m tall waterfall that felt like it was off the beaten path as far as foreigners like us were concerned.

In fact, it was similar to Magod Falls in the sense that it seemed like only locals would come here.

Julie and I wondered how many non-locals had even known about these falls.

Hiking to and Experiencing the Sathodi Falls

From the car park (see directions below), there was a well established walk of about 1km each way, I think.

To our right as we walked towards the Sathodi Falls was a large reservoir where the Kali River was held up by the Kodasalli Dam (we could also see this reservoir during the unpaved section of road leading down to the car park).

The trail gently descended in the direction of the stream feeding the reservoir before veering left past some lookout tower while roughly paralleling the stream.

There was even a stretch of trail where we noticed canals flanking either side of the walkway (which I guessed was for erosion control of the trail).

Once we were near the end of the trail, there was a shelter and picnic area with a partial view of Sathodi Falls.

We were able to continue to walk carefully a little further to get a little bit closer to the falls, but we never quite made it all the way to the base of the waterfall.

Therefore, our semi-close view seemed to be the best views that we were able to get (see photo at the top of this page).

We didn’t get all the way to the falls as the combination of a jumble of rocks and stream made it a little dicey to proceed any closer.

So we had to make do with our partially obstructed and distant view of the Sathodi Falls.

We encountered some Indian students (which explained why we noticed many of them were couples) who were escorted here from the bus that was also parked at the car park.

From what we could tell, none of them ventured further that the lookout area we were stopped at so I guess we were wise not to take any more risks for a better view.

And to further reinforce the notion that hardly any foreigners came here, Julie and I definitely noticed that we routinely drew stares from other visitors at the falls.

Other than the novelty of people of Chinese descent visiting this part of the country, we engaged in pleasant conversations with a few people who broke the ice and initiated the chatter with us.

Sathodi Falls is located in the Kallaramarane Ghat near the town of Yellapur (about 32km from town).

There’s a well-signed turnoff just outside of Yellapur town (in the direction of Hubli or Hubballi, which is opposite the direction of Magod Falls) where the falls is another 25km further from that turnoff.

While on the road to the falls, there were a few forks in the road as well as a few villages that we passed through.

It could definitely be confusing since these forks weren’t well signed, and even our driver had to ask for directions or for confirmation that he picked the correct fork when faced with those decision points during the drive.

The last 5km was on a pretty rough unsealed dirt road where passenger cars should make it, but it was certainly out of our driver’s comfort zone as there were several stretches where he was cursing when he wasn’t totally sure if the car could make it some spots.

In other words, caution was definitely warranted here.

We came here from Magod Falls, and it took us about 90 minutes to finally make it to the car park for Sathodi Falls.

We got to this area after driving 4.5 hours from Panaji, Goa.

After visiting the falls, we stayed in Sirsi.

We flew to Panaji (the main town of Goa) from Mumbai, which took us about an hour to traverse the 579km or so (10 hours drive). Mumbai was a two-hour flight from Delhi. 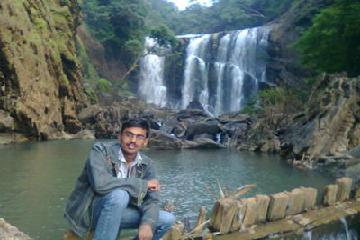 Beautiful falls (Sathodi Falls) January 12, 2012 6:14 am by Suresh Patil - I am Suresh Patil. I am a law student. I and my 7 friends had visited the falls. We are all from Dharwad. We had gone there by bike. We had reached the falls about at 2o clock. When we reached there, many tourists are there and enjoying. We got tickets and gone there. What… ...Read More