Tarzan Falls is one of Guam’s better known waterfalls, where even one of my coworkers who was from the island knew about this waterfall though he doesn’t typically go hiking on his visits there.

Indeed, this was a striking 40ft waterfall (though it looked a lot bigger) that can spread out and cover a significant part of the underlying bedrock depending on how much water was in the Ylig River.

The picture you see above was from our visit in late November 2022, which was technically Guam’s “Wet” Season (typically July to December), but we actually enjoyed pretty decent weather on the days leading up to our experience.

Although perhaps the most well-known and accessible waterfall on Guam is likely the Talofofo Falls, which was privately developed, I found Tarzan Falls to be the most accessible of the natural waterfalls on the island.

In fact, this waterfall was described in the “The Best Tracks on Guam” book as a “good beginner’s hike”, but I think these adjectives depend on who’s doing the describing.

That’s because I learned that it may be a beginner’s hike if you’ve done a lot of hiking on Guam, but I don’t think it’s as easy as the book (and some locals) would lead you to believe.

While the length of the route was a modest 2 miles round-trip (according to my GPS logs), we still encountered false trails, a lack of signage, steep and slippery terrain, some exposure to blood-drawing vegetation, and extensive stretches of mud.

I’m sure that with some persistence and phone apps like GaiaGPS or AllTrails, we’d eventually figure it out on our own.

However, I was glad that I had hired a trekking guide as it was the only hike that my wife and daughter did on Guam, and I knew that their safety was very important (especially after I had experienced Tak’hilo Falls earlier).

Trail Description – Hiking To The Top Of Tarzan Falls

The hike to Tarzan Falls starts besides the Cross Island Road (see directions below).

Although there was signage and a fence with an apparent trail immediately behind where our guide parked his van (underneath a bunch of trashed shoes flung up to the power lines), that was not the way to go.

Instead, we actually had to briefly walk back towards a 4wd track fronted by a road barricade (to help reforest the Cotal Conservation Area), where we then went behind it to continue towards a tall wind turbine surrounded by fencing.

At this point, we went to the left of the wind turbine, where we then picked up a 4wd track.

We had to be careful not to follow the 4wd track (I noticed a colored tape on a blade of vegetation) leading to the right of the wind turbine, because that one went to the Tarzan Pools, which was a different excursion.

Anyways, we would descend on a fairly muddy and moderately steep (in stretches) track with some views across the center of Guam towards the Leo Palace.

During this descent, we definitely appreciated having trekking poles to provide an extra pair of “legs” and help with balance.

Along the way, we also noticed a lot of unmarked trail forks and false trails criss-crossing the path that we were on, and it was here that I really appreciated having a guide to keep us on track.

At about 3/4-mile from the trailhead, we had traversed a pretty muddy slope, where we had to hold onto trees and roots as best we could, and then we finally reached a small segmented waterfall that turned out to be the “upper cascade” of Tarzan Falls.

This was where we had to cross the Ylig River over a series of slippery bedrocks that were close enough to allow us to cross over a tight intermediate chute without getting wet.

Once on the other side, there was also an opportunity to scramble to the very brink of the main drop of Tarzan Falls.

Trail Description – Descent To The Bottom Of Tarzan Falls

After having our fill of checking out the upper cascades of Tarzan Falls, we then followed an informal trail marked by a combination of colored ribbons as well as rope to better manage the moderately steep and muddy slope.

Since we had to hold onto trees and even blades of swordgrass, sawgrass, and thorny trunks, we appreciated wearing gloves.

Towards the bottom of the descent, there was a high concentration of mucky mud that we had to slosh through before finally getting to the base of Tarzan Falls (roughly 1/4-mile from the top).

On the near side of the river, we managed to get angled profile views as well as an in-your-face frontal view of the wall of water that Tarzan Falls yielded.

With some careful maneuvering, I managed to scramble with trekking poles to the middle of the Ylig River for better photos of the entirety of Tarzan Falls.

After having our fill of the falls, we then went back the way we came gaining back the 300ft we had lost to this point over a length of about a mile.

Along the way, there was a separate trail that traversed the Ylig River above the brink of the upper cascades, which was easier than the slippery way before that cascade which we had taken earlier.

Overall, we spent a little over 2 hours for the entire excursion, which was at the right difficulty level for our family.

Finally, it was worth noting that it was also possible to scramble further downstream from the base of Tarzan Falls to an impressive lower waterfall, but we opted not to do that (which would likely take another hour).

Tarzan Falls resides in the Cotac Conservation Area in the villages of Yona or Santa Rita in Guam. It may be administered by the Guam Department of Agriculture. For information or inquiries about the area as well as current conditions, you can try visiting this website.

Tarzan Falls can be reached from the Cross Island Road (Route 17) straddling the municipalities of Santa Rita and Yona.

I’ll describe how we would drive from Tumon Bay to the trailhead for Tarzan Falls, but realize that our guide had us park our car at the War in the Pacific Museum to reduce the chances of a car break-in.

By the way, Chris leads the Guam Trekking Tour, which you can look him up on his Instagram page.

From Tumon Bay, we would go south on Pale San Vitores Road for nearly 2km to the connector road GU-14A, where we’d turn left.

Then, we’d take the GU-14A uphill to the next traffic light, where it junctions with Route 1 (Marine Corps. Drive).

Turning right onto Marine Corps. Drive, we’d then continue south for another 18km towars a traffic light where it junctions with the GU-2A.

Note that by this traffic light is the War in the Pacific Museum on the right.

Anyways, turning left onto the GU-2A, we’d then continue for another 1.4km before hanging another left to go onto Hwy 5.

After another 2km on Hwy 5, we’d then make another left to go onto the Cross Island Road (Route 17), where we’d then drive for about 7km to the trailhead for both Tarzan Falls and Tarzan Pools (on the left).

Overall, this drive was said to take over 30 minutes, but I’d allow at least 45 minutes given the traffic conditions.

Back and forth sweep from the very brink of Tarzan Falls 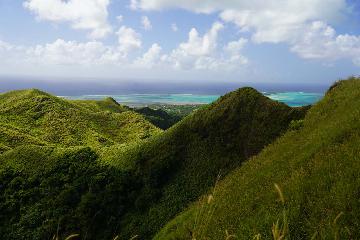 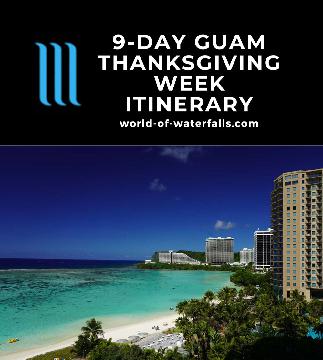 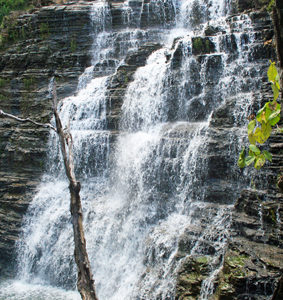