Adamsons Falls (or Adamson’s Falls) was one waterfall that Julie and I really had to earn.

Not only was the track to get to the falls long, but it also wasn’t the easiest to follow.

Plus, the track was quite overgrown and muddy as there were several stagnant pools of water that harbored leeches.

Indeed, it seemed like Mother Nature was on the verge of reclaiming that track.

Even the drive to the trailhead wasn’t easy (see directions below).

Once we got near the falls, we still had to do some additional scrambling to even get a satisfactory view of the falls (as shown in the photo above).

But even the photo didn’t really do the falls justice as there was far more of the waterfall than what we could show.

It was totally a challenge all around, but Julie and I felt very rewarded (and relieved) to have successfully finished the hike.

About the Adamsons Falls Adventure

The entire hike was said to be about 3.4km each way according to our GPS track log. It took Julie and I a little over 4 hours for the entire out-and-back hike.

However, we admittedly had plenty of head-scratching sections which probably slowed us down.

The footing was also quite slippery and muddy, which further conspired to keep us from going at normal walking speed.

Julie and I were so focused on concentrating to stay on the path that we didn’t even notice the linking track to Creekton Falls, which was said to be completely overgrown.

Even if we had noticed the track, we probably wouldn’t even have entertained the thought of going even deeper into the wilderness for it.

Yet despite the obstacles, we were quite appreciative of the degree of trail maintenance considering the circumstances.

For example, there were wooden stepping blocks in the muddiest spots to avoid sloshing through them.

There were also footholds in the steepest sections requiring some climbing.

Moreover, we were especially thankful for the coloured bright ribbons that acted as trail markers.

These were especially useful for detours around fallen trees or where parts of the track were ill-defined.

I reckon that following these ribbons might have been the most important aspect of staying on this track without getting lost.

We couldn’t imagine how much more difficult accessing the falls would be if it weren’t for them.

After a little over an hour of going through the bogs and dense rainforest through the narrow track, we finally started to hear the Adamsons Falls.

However, we still had to work in order to get a view of it.

The Scramble to view Adamsons Falls

That was when we climbed some pretty steep terrain alongside the falls which remained audible but not visible through the dense foliage.

The ascent was almost like a scramble as we found ourselves using all of our limbs to make the climb while still concentrating on finding more of the coloured ribbons.

Eventually, we reached a part where the “track” ended (as far as we were concerned) right in between the two main tiers of Adamsons Falls.

We had to scramble right onto the stream right in front of a smaller intermediate tier in order to look right up at the waterfall’s tallest visible tier (as shown in the photo at the top of this page).

Behind us were more tiers of the falls that weren’t visible that we had to climb up along to get to this point.

Even though I couldn’t find out any official information concerning its height, I did see somewhere in the literature that Adamsons Falls was 50m tall.

However, that seemed to sell the waterfall short given all its hidden tiers.

The vantage point that we earned of the falls also required a wide angle lens mostly because we were so close to the top tiers of the waterfall itself.

The views were a bit awkward, and in hindsight, I wished that I had the foresight to take a movie to better show the full extent of the falls.

I guess that would have to wait for a return trip if we’re fortunate to have the time and resources to make it back here.

Adamsons Falls resided in Southwest National Park near Dover, Tasmania. It is administered by the Tasmania Parks and Wildlife Service. For information or inquiries about the area as well as current conditions, visit their website or Facebook page.

That spur road was a somewhat rough and narrow logging road riddled with downed trees and potholes. It eventually joined with Coal Hill Rd where we turned left then followed that road to the obscure (but signposted) car park for Adamsons Falls.

Given the windy conditions on the day we did the hike in late November 2006, there was a fallen tree that actually split the sign at the car park! So we were a bit nervous about leaving our car here and the risk of it being disabled by another falling tree. And believe you me, this was NOT the place to be stranded!

Overall, this drive was said to be 106km or nearly 2 hours. 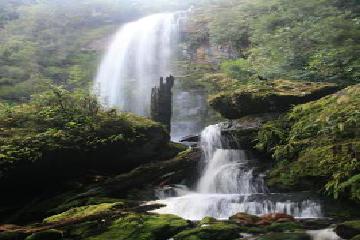 Adamsons Falls and Creekton Falls October 15, 2016 8:41 am by Caedence Kuepper - I saw your writeup on Adamsons Falls from a while back, and being quite partial to an adventure myself I decided to go check it out. The track in is still rough, although it didn't seem too hard to follow for most of it. There had been a lot of rain leading up to the… ...Read More