Beauchamp Falls was another waterfall that we targeted for a visit while touring the Great Otway National Park as we briefly detoured inland from the famous Great Ocean Road.

What attracted us to this 20-25m waterfall was its satisfying rectangular shape surrounded by native bush.

It seemed like this particular waterfall didn’t quite get the same fanfare as other neighbouring waterfalls in the Otways.

So that allowed Julie and I to pretty much enjoy this waterfall all by ourselves when we first visited this place back in November 2006.

We came back 11 years later, and it appeared that word had gotten out about this place.

That was because I had noticed that many more people were enjoying the falls as well as the campgrounds near the trailhead.

As for its flow, as you can see in the photo above, this waterfall seemed pretty healthy.

This attested to the high rainfall nature of the Otways, which seemed to be more drought resistant compared to other parts of Victoria.

And this was even more apparent during our first visit here when a severe drought gripped the southeastern region of Australia for the better part of the decade!

To earn a sighting of Beauchamp Falls, we had to go on an upside down hike requiring around an hour to complete.

The dense rainforest meant that the track was refreshingly cool and misty under wetter conditions, but it also meant that it could be a little on the muggy side on a warm and sunny day (like it was on our latest visit in November 2017).

In any case, the track was mostly well developed and easy to follow.

The only difficulty was getting a good view of the falls from its base as well as the fairly moderate uphill hike on the return to the car park.

The track started off from the fairly open car park, which some people also used as a campground.

It then descended on a pretty peaceful walk amongst the native forest trees and ferns that seemed to be a distinguishing feature of the Otways rainforest.

The track seemed to be on a mix of old logging roads and dirt track as it continued mostly downhill towards Dappeler Creek (the watercourse responsible for Beauchamp Falls).

It definitely seemed more primitive and less developed compared to the other neighboring waterfalls like Triplet Falls and Hopetoun Falls.

Once the track bottomed out near the creek, it then followed along the creek briefly to the north before making a final bend and steep descent to the waterfall.

The descent involved going down several steps before reaching a newly developed walkway that would eventually lead right up to a mostly overgrown and non-ideal viewing spot of the upper part of the Beauchamp Falls.

The first time Julie and I were here back in 2006, this viewpoint wasn’t there.

Instead, we had to walk along Dappeler Creek and enjoy the falls from its very bottom, which I contend would still be the best place to experience the falls.

That said, it appeared that Parks Victoria had purposefully built railings along the final portion of the track to obscure the old path to the base of the falls.

This development may be to prevent further erosion caused by the scramble to the creek as well as to limit the likelihood of slip-and-fall injuries due to the muddy terrain and slippery rocks.

Despite the infrastructure to obscure the old path, there were still plenty of visitors determined to get a better view of the falls via the old path.

The old path wasn’t hard to spot, especially since we knew where to look having been here before.

Regardless, after having our fill of the Beauchamp Falls, we then made the long climb back up to the car park.

Beauchamp Falls resides in the Great Otway National Park near Apollo Bay, Victoria. It is administered by Parks Victoria. For information or inquiries about the area as well as current conditions, visit their website.

We’ll describe the driving route to Beauchamp Falls from Beech Forest, which was about 67km (an hour drive) east of Port Campbell or 40km (under an hour drive) north-northwest of Apollo Bay.

Both approaches minimize the amount of unsealed driving.

From Beech Forest, we drove east on the Beech Forest-Mt Sabine Road (C159) for about 1.3km to the Binns Road turnoff on the right.

There was signage for both Beauchamp Falls and Hopetoun Falls at this junction.

After turning right to go onto the unsealed Binns Rd, we then drove another 500m or so to another signposted junction.

We then turned left at this junction to go onto the unsealed Beauchamp Falls Road, and we followed the signs and this road all the way to its end in a little over 2km.

An alternate approach from Apollo Bay would be to take the Binns Road directly from the south at about 13km west of town along the Great Ocean Road (B100).

Finally, we’d follow that road as above for the final 2km to the car park at its end.

Panning video showing the Beauchamp Falls from the official lookout

Tree Ferns February 23, 2018 3:09 pm by Vanessa Reynolds - Hi, I liked your blog of walk to Beauchamps Falls in the Otways, but noticed you wrote about "umbrella ferns". These are called TREE ferns in Australia, there are only 2 types, Dicksonia & Cyathea. Remnant vegetation from when Australia was joined as part of Gondwana - very slow growing. About an inch per year,… ...Read More 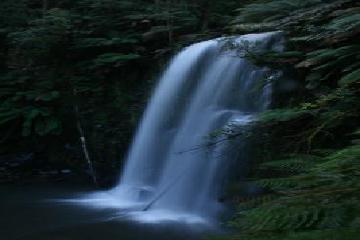 Beauchamp Falls September 2010 July 4, 2011 3:55 am by Jeff Scott - We visited Beauchamp Falls in September 2010. Our original goal was Hopetoun Falls but somehow we missed that and ended up here instead! A long walk in the rain, but certainly worth the effort and I got one of my favourite photos here. ...Read More