There were numerous waterfalls around the world named Bridal Veil Falls, but in this particular case, we’re talking about a wispy, light-flowing, cliff-diving waterfall that may also be known as Govett’s Leap.

Given its light-flowing nature when we saw it, we couldn’t say for sure how reliable the falls was.

All we could really say about its reliability was that we visited during a storm and that it occurred on a year when most of southeastern Australia was seeing some of its worst drought in its history.

Thus, it was difficult to tell how the waterfall would normally behave.

Aside from the uncertainty of the waterfall’s flow, as you can see from the photos on this page, the Govett’s Leap Lookout certainly boasted some of the most spectacular views in the Blue Mountains.

The waterfall itself really accentuated the expansive panorama not far from the town of Blackheath.

We definitely felt like we were on top of the world taking in the panorama and going on some of the walks in our attempt to get closer to the falls.

As for getting closer to the falls, we weren’t successful in doing that. However, to be honest, we didn’t try all that hard.

Speaking of other walks, we also did a short walk towards another wispy, cliff-diving waterfall called Horseshoe Falls.

I believe it was so-named because the wide amphitheater it was in was curved and perhaps reminded someone of a horseshoe.

Apparently, the falls was one of many very temporary waterfalls in the area.

However, we were unsuccessful getting a clean view of it due to line-of-sight obstructions.

That said, the walk allowed us to experience a bit more of the precipitous cliffside views.

If we were so inclined, we easily could’ve occupied several hours meandering about on the many trails within the trail network on this part of the Blue Mountains.

Even though we happened to show up during a brief break in some bad weather, the views were still impressively beautiful.

I can imagine that on a clearer day, you’d get much better views as well as maybe even a glimpse of that bluish mist that gave the Blue Mountains their name.

Bridal Veil Falls resides in the Blue Mountains National Park near Blackheath in New South Wales. It is administered by the NSW National Parks and Wildlife Service. For information or inquiries about the area as well as current conditions, visit their website.

For further context, Blackheath is about 128km (under 2 hours drive) west of Sydney CBD. 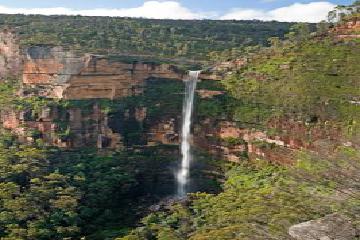 Blackheath Waterfalls March 28, 2012 7:02 am by Peter Lockwood - I noticed the pictures of the Bridal Veil Falls & Horseshoe Falls at Blackheath were taken in an "off" year. Here are the pictures I took in 2009 after some good rain. ...Read More