Carisbrook Falls was probably one of the few waterfalls that we could quite seriously say was literally on the Great Ocean Road.

Most of the rest of the waterfalls required some bit of a drive further inland to access, but this waterfall was only a short hike away from the famous road itself (see directions below).

Yet despite its close proximity to the Southern Ocean, the short 300m uphill walk (600m return) that we went on took us into a lush but sun-exposed ravine.

At a lookout across this ravine was where we were able to get a distant look at this impressive 50m waterfall.

It only took Julie and I about 15 minutes round trip to complete the excursion though I’d imagine it could be 30 minutes return (as the signs indicated) at a much more leisurely pace.

Despite the quantity of vegetation, the short uphill track passed through terrain that was noticeably drier and more windswept than what we were used to deeper in the Otways.

In fact, the smell of the neighboring vegetation kind of reminded me of the prickly sage and chaparral vegetation more prevalent in many of the waterfall hikes around Southern California.

I suspect that the reason for this would be its proximity to the ocean which would be more subject to salt from the sea spray as well as dessicating winds.

The track pretty much hugged the slopes of the ravine carved out by the Carisbrook Creek.

This persisted all the way to the end of the track, where we encountered a lookout of the Carisbrook Falls perched across this ravine.

We felt this was one of those look-but-don’t-touch waterfalls given that there seemed to be no reasonable access to get closer to it.

Instead, we were merely content to get our views from the overlook, whose flow seemed to vary from the average output you see in the photo above.

On our first visit back in November 2006, we experienced a somewhat lower flow as the visit took place in the midst of a nearly decade-long drought.

It was also hard to truly appreciate the size of the falls from such a distance, which didn’t seem to do it justice.

After all, we noticed there were some additional hidden tiers of the falls in the densely vegetated ravine below.

Regardless of the state of the Carisbrook Creek, I tend to think of this excursion as an opportunity to stretch out and take a break from the very scenic drive along Great Ocean Road.

The stretch between Apollo Bay and Lorne was especially scenic and memorable.

It not only included the Carisbrook Falls, but it also included the famed Kennett River area not much further to the east.

At Kennett River, we happened to spot a koala high up on one of the gum trees there.

We looked for the car park on the left side of the road, which was well-signed.

Since we headed east, we noticed that there was also a koala sign nearby the turnoff, which can be used as an additional landmark so we wouldn’t miss this turn.

Going in the other direction, the car park would be on the right side of the Great Ocean Road about 7km (under 15 minutes drive) west of Kennett River and 29km (under 45 minutes) west of Lorne.

Left to right sweep showing the falls as well as the gorge it's in, then zooming in for a more detailed look at the falls 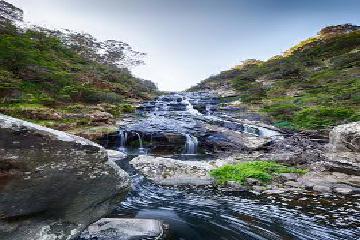 Photo from Carisbrook Falls base October 30, 2015 8:49 am by Shinytoaster - It is possible to get to the base of the waterfall. Near the start of the path to the platform, there is a path to the left which ends at the creek, after that you travel along the banks on which ever side looks easier. You will have to cross the creek a few times… ...Read More