Dangarsleigh Falls (or Dangars Falls as well as Dangar Falls for short) was supposed to be an impressively tall waterfall tumbling 183m into the Dangars Gorge not too far from the New England town of Armidale.

Unfortunately for us, the falls was dry during our visit in May 2008, which was amazing considering that not much further away were the gushing waterfalls of the Oxley Wild Rivers Gorge system.

In particular, we saw Tia Falls and a decent performer at Apsley Falls earlier in the day.

I guess some pockets of land got much more rain than others despite their proximity to each other.

Julie and I only spent about 20 minutes away from the car.

But as soon as we realized there was no waterfall here (due to the Salisbury Waters watercourse lacking water), we didn’t bother doing any of the other (longer) walks taking in additional waterfalls further downstream.

Dangarsleigh Falls resides in the Oxley Wild Rivers National Park near Armidale in New South Wales. It is administered by the NSW National Parks and Wildlife Service. For information or inquiries about the area as well as current conditions, visit their website.

From Armidale, we followed the signs south for the falls, which led us onto Dangarsleigh Rd (towards the south of town).

After taking that road for about 7.7km, we then kept left (near the Dangersleigh Memorial), where the sign then guided us onto an unsealed side road (Dangars Falls Rd) that ultimately ended at the car park for the waterfall.

It’s roughly 22km from Armidale to the car park, and it took us about a half-hour. 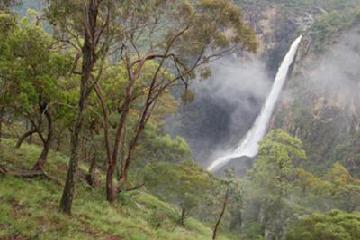 Dangars Falls – Great When Wet May 7, 2009 11:25 am by Ian Smith - I've been to Dangars Falls many times but I've never seen it totally dry. Once I was there just after a peak flood and it was spectacular. Sadly, my pictures are on some old film. However, I often used to drop it during my time as a rep and, on this occasion, there was quite… ...Read More