Davies Creek Falls is an impressive series of cascades said to drop with a vertical height of about 100m (its largest cascading tier was said to have a 76m drop making it ones of the highest in the region).

This waterfall is situated in Dinden National Park, which is right next to the Barron Gorge National Park (of Barron Falls fame).

Therefore, this waterfall is within reach of the well-touristed town of Cairns, which is most known for Great Barrier Reef tours.

Further adding to this waterfall’s allure was the chance at swimming within Davies Creek, particularly an “infiniti pool” at the brink of the Davies Creek Falls.

I’m not sure if such a swimming hole is sanctioned by the authorities because there’s no formal trail leading to the brink of the falls (it’s really more of a boulder scramble with some risk involved).

Anyways, we didn’t get to visit this waterfall when we first visited Cairns in May 2008, but we did finally get a chance to experience it in late June 2022, and below is our trail description of how it went.

We experienced Davies Creek Falls as part of a short 1.3km loop walk, which we did in a clockwise direction.

From the car park (see directions below), we descended a gentle track about 200m before keeping left at a fork to check out the view from an overlook another 25m later.

At this lookout, we could hear but not really see the Davies Creek Falls as this spot was more for the valley views in the direction of Mareeba.

Backtracking from this lookout and continuing the trail’s descent for the next 150m, we then arrived at the next lookout.

At this spot, we were able to get a sideways view of the main drop of the Davies Creek Falls, which was difficult to capture in a single shot due to the length of its run.

Given the slippery and steep slopes of the underlying rocks surrounding the falls, fencing was set up to prevent people from getting themselves into (fatal) trouble.

Therefore, there was no safe or sane way of scrambling to the bottom of the waterfall, which would be where they’re best experienced.

So after having our fill of the views from this spot, we then backtracked 60m to resume the circuit walk, but before doing that, I noticed a well-used trail-of-use to the left.

Well, that trail quickly disappeared into a combination of boulder scramble with overgrowth, but it eventually led back to the brink of Davies Creek Falls, which is where I saw people swimming at the so-called “infiniti pool”.

There was a small cascade feeding this plunge pool, and needless to say, you definitely don’t want to be anywhere near the brink of the main drop of Davies Creek Falls and its 76-100m drop below.

Given the somewhat rough nature of the scramble and the risk involved if you don’t respect the hazards involved here, I don’t think this interlude to the swimming hole is endorsed by the authorities.

Continuing with the circuit walk, after another 80m or so, we reached a calm part of Davies Creek, and I’d imagine this could be another opportunity for a swim (though there wouldn’t be a view).

Beyond this calm part of Davies Creek, the trail then proceeded for another 300m or so before reaching a trail junction nearby a so-called “picnic area” (except there’s no picnic tables nor shelter).

At this spot, I’d imagine you could picnic on some random rocks as well as go for a swim in another calm part of Davies Creek.

After having our fill here, we then walked uphill for the remaining 300m to return to the car park and end this circuit walk.

Overall, we spent about an hour away from the car to complete this circuit (including all the scrambling and picture-taking).

That said, I’d imagine you could even spend half that time on this loop without making as many stops as we did.

And if you only went to Davies Creek Falls and back, then you could even spend less time than that so you could make this excursion as short or as long as you want.

Davies Creek Falls resides in Dinden National Park near Mareeba, Queensland. It is administered by the Queensland Parks and Wildlife Service. For information or inquiries about the area as well as current conditions, visit their website.

Davies Creek Falls is in Dinden National Park roughly 23km from the town of Mareeba.

However, since we were based in Cairns, I’ll describe the driving directions from there.

So from Cairns CBD, we’d drive north on the Bruce Highway for nearly 14km to a roundabout where the first exit on the left continued the Route 1.

Then, we drove 35km on the Route 1 (which was climbing and twisty for the first 12km) towards the signed turnoff for Davies Creek Falls (or Dinden National Park) on the left.

Once on the Davies Creek Road, we then drove 8km towards the signed Davies Creek car park, which seemed to have room for about a half-dozen cars or so.

It’s worth noting that most of the drive on Davies Creek Road was unsealed, but it was fairly wide and not too beat up so passenger cars should be able to make it without problems.

Overall, this drive would have taken us around 90 minutes (though it depends on how many slower vehicles are in front of you) if we drove from Cairns.

It was about 35 minutes drive from Barron Falls, which was where we had driven from when we visited Davies Creek Falls in late June 2022. 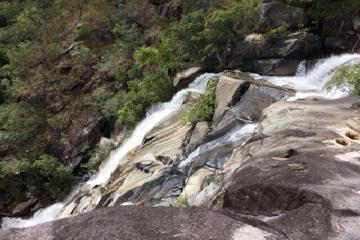 Davies Creek Falls May 31, 2015 5:16 pm by Suzanne Lennox - Davies Creek Falls is near Mareeba, Far North Queensland. The water tumbles over beautifully coloured rocks into a pool at the bottom. Davies Creek is lined by magnificent trees including paperbacks and pandanus. Grass trees and cycads are dotted around the surrounding bush. ...Read More