Fitzroy Falls dazzled Julie and I with its impressive flow despite the drought during our November 2006 trip to Southeastern Australia.

It featured a dramatic cliffside free-fall, which we were able to appreciate from several panoramic overlooks.

It was probably one of our favorite (if not the favorite) waterfalls in New South Wales.

The falls was said to be 80m tall, and apparently, it was said to have reliable flow despite a dam further upstream collecting the flow of the Yarrunga Creek (resulting in the Fitzroy Reservoir).

The flow was said to have been reduced since the implementation of the dam.

Conversely, it might also perform more consistently because of it (contrary to other waterfalls we’ve seen where dams had the opposite effect of robbing a waterfall dry).

So imagine how much more impressive it would have been if we were already impressed by it in its current compromised state!

From the self-pay car park (see directions below), we then walked through the visitor center where the walks to the views of the falls started right behind it.

We began by checking out Fitzroy Falls near its brink since that was where the visitor center was close to.

Then, we followed the cliff-side track further downstream and away from the falls where there were more lookouts including the signposted Jersey Lookout and Richardson Lookout.

All along the way, there were interpretive signs talking about the native vegetation and wildlife of the area as well as the geology that gave rise to the falls.

The farther away from the falls we went, the more direct the views became.

Julie and I also noticed some more hidden tiers of waterfalls nestled within the foliage deep in the valley below.

Since our visit happened to be during overcast skies, which then became rain, our views of the surroundings weren’t as expansive, but they were impressive nonetheless.

Beyond Fitzroy Falls to Twin Falls

Although it was sufficient for us to visit Fitzroy Falls from the given overlooks, we also continued the walk towards Twin Falls, which we have a different writeup for.

Twin Falls was not factored into the difficulty rating on this page since it required greater exertion than what was required for Fitzroy Falls.

One of these days, Julie and I would like to return here under better weather.

The hope would be to get the views that might be reminiscent of the Blue Mountains experience a couple hours west of Sydney.

By the way, some people might refer to the falls as Throsby’s Falls after Charles Throsby, who was credited as the first non-Aboriginal person to chance upon it.

The name Fitzroy came from a New South Wales governor who first visited the falls in 1850.

Fitzroy Falls resides in the Morton National Park near Robertson in New South Wales. It is administered by the NSW National Parks and Wildlife Service. For information or inquiries about the area as well as current conditions, visit their website.

There are many ways of getting to Fitzroy Falls so we’ll just describe the routes that we took to get to and from the falls.

Coming from the Hume Hwy (Hwy 31) going northbound, exit at Hwy 48 (Illawarra Hwy) for Moss Vale. Then, shortly after passing through the town, turn right onto Hwy 79 (Nowra Rd), and follow this road to the visitor centre and car park for the falls.

If you have a waterfall story or write-up that you'd like to share, feel free to click the button below and fill out the form...
Fitzroy Falls January 4, 2011 3:43 am by Leo Li - There is a place southwest of Sydney called Southern Highlands. In Southern Highlands there is a famous waterfall called Fitzroy Falls. Fitzroy Falls is 81 metres high. It is surrounded by a valley. The falls fall onto some rocks and form a river that flows into the valley. You can view the falls from many… ...Read More 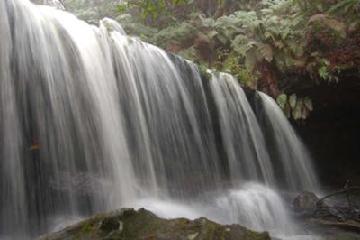 The Fitzroy experience May 7, 2009 11:33 am by Ian Smith - Fitzroy is indeed worth a look, it's almost up there with Ellenborough Falls. The walk along the western rim is a lovely walk and, as suggested, it has some wonderful views and you cross over another waterfall and then reach The Grotto, a small but beautiful cascade that drops into a glade. I thought I'd… ...Read More