Guide Falls was one of the more satisfying waterfalls that we encountered in Tasmania.

It an easy waterfall on the eyes with its wide block shape as the Guide River fell around 25m (probably closer to 35m counting the upper drop) over an imposing basalt face.

In addition to being easy on the eyes, the waterfall was also very easy to experience.

That ease of viewing came in handy when we visited this waterfall in early December 2017.

During that visit, the same storm system that had been pummeling Victoria was also raining buckets in northwestern Tassie.

And yet, we were still able to have a successful visit seeing the falls from its top as well as from its bottom.

When we first came to this waterfall back in late November 2006 under much drier conditions, the falls had significantly lower flow.

However, even with the diminished flow, we appreciated its segmented characteristic along with a faint rainbow in its mist.

Each time Julie and I had visited Guide Falls, we started from the upper car park (see directions below).

From there, it was a short 50m walk to a pair of lookouts right at the top of the waterfall.

The lookout on the far left side peered right down over the main drop into the knife-like head of the gorge with the upper drop also tumbling in profile from immediately upstream.

With the rain coming down hard, the downward viewing angle allowed the umbrella and the lens hood to minimize the amount of rain punishing the DSLR camera.

As we then walked over to the other lookout, we managed to get the familiar and very pleasing frontal view of the two-tiered block waterfall.

Again, with the downward viewing angle, we were still able to successfully capture the experience despite the heavy rain.

This was where the photo you see at the top of this page was taken from.

Anyways, after having our fill of the falls from this spot, we then walked roughly 80m down some steep set of steps to the banks of the Guide River.

Then, we were able to walk along the riverbank upstream (being careful due to the slippery footing) to get up to the imposing wall of water from the main drop.

From this vantage point, we also got a better appreciation of the columnar basalt texture of the cliffs that gave rise to the Guide Falls.

Once we had our fill of this spot, we then headed back up to complete the excursion.

Of course, we also could have done this excursion to or from the lower car park.

This would involve hiking all along the Guide River over a 320m track.

Further downstream of the steps connecting with the upper car park, there was at least one intermediate waterfall as well as some wildflowers in bloom that we checked out.

Since there was a picnic area and toilet facility at the lower car park, I’d imagine that approach would be the more popular way to go.

Guide Falls resides by the town of Ridgley near Burnie, Tasmania. It is administered by the Burnie City Council. For information or inquiries about the area as well as current conditions, visit their website.

We visited Guide Falls from a couple of different routes, which I’ll explain in this section – the first one from Burnie, the second one from Cradle Mountain.

Driving from Burnie to Guide Falls

From the Bass Highway (Hwy 1) and Mount Street (B18) intersection at the southern end of the Burnie CBD, we drove south on Mount St / Ridgley Highway (B18) for just under 14km to the turnoff for the West Ridgley Road (C104) on our right.

This turnoff was just south of the main part of Ridgley.

Then, we drove about 2.3km on the West Ridgley Rd to the signed turnoff on our left (just before the bridge over the Guide River; not following the sign for the Alpaca Farm as that wasn’t the purpose of this visit).

After leaving the West Ridgley Road (C104), the Guide Falls Lower Car Park was about 200m further down the access road on our right.

However, we continued driving up the hill another 400m to the upper car park, where there was also room to park and even have a picnic under better weather conditions.

Overall, this 17km drive took us about 25 minutes.

We then turned right onto the Murchison Hwy (A10) and drove for about 16.5km before leaving the A10 and keeping right to go onto the Ridgley Hwy (B23).

After about 40km on the Ridgley Hwy (B23), we then followed the sign to turn left onto West Ridgley Rd (C104; right before the town of Ridgley).

Then, we followed the directions as above to the Guide Falls car parks.

Overall, this drive took us about 1 hour and 15 minutes. 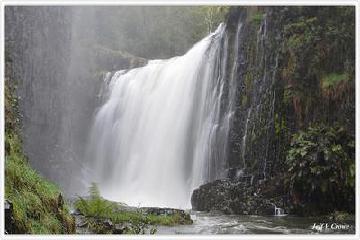 Guide Falls February 23, 2014 6:25 am by Jeff Crowe - Guide Falls is a small, amphitheatre - style waterfall, with a small tier at the top and then the largest falls drops into the naturally formed amphitheatre with steep cliffs surrounding, with continuing cascades located further down the Guide River. A deep hole directly below the falls provides for a great swimming hole in summer.… ...Read More