Hindmarsh Falls was an attractive series of cascades and pools before culminating in a 20-25m drop easily viewable from a lookout at the end of a short track.

As you can see from the photo below, there was a bit of colour to this falls thanks to the underlying algae providing some greens and yellows to the scene.

In fact, of all the waterfalls we’ve seen in the state of South Australia, Julie was partial to this one based on the colour alone.

Of course, that colour wasn’t present on our first visit back in November 2006 when it was one of the casualties of the severe drought that gripped much of the southeasern sections of the country for the better part of the decade.

From the car park (see directions below), we followed a well-developed concrete path descending for about 250m or so eventually terminating at an overlook with a direct top down view of the Hindmarsh Falls.

It appeared that the track used to continue beyond the barricades such that the base of the falls would have been accessible.

But I suspect that for reasons of erosion and the subsequent exposure to dropoffs (in addition to letting the area re-vegetate and stabilize), they’ve closed off that access over the years.

I recalled that it was even closed during our first visit.

Nevertheless, our excursion only took around 10-15 minutes so it was a good place to stretch out and enjoy the scenery whilst making the drive between Adelaide and Victor Harbor.

The nearest town to Hindmarsh Falls was Victor Harbor so we’ll describe the driving directions from there.

The road then turned left onto Hindmarsh Tiers Rd, which we then followed for about 8.5km.

Next, we turned left onto Hindmarsh Falls Rd (there was a sign pointing the way to the waterfall at this junction).

We then followed the Hindmarsh Falls Rd to its end at about 1.3km away from the junction.

The last kilometre or so was unsealed.

Overall, it took us around 15-20 minutes to make this drive from the coastline at Victor Harbor.

For context, Victor Harbor was about 84km (over an hour drive) south of Adelaide. 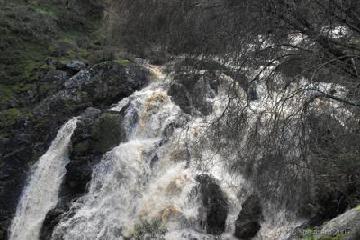 Hindmarsh Falls in full flow July 13, 2009 12:19 pm by Sue Allard - We went to Hindmarsh Falls today (13/7/09) and it was in full flow. The past couple of weeks we have had consistent rain, especially in the past 4 days which have been very heavy. The falls were raging and the power of the water was absolutely amazing to see. Highly recommend a visit as you… ...Read More