Hopetoun Falls was certainly one of the more pleasing waterfalls that we visited during our drought-stricken trip to Victoria in November 2006.

And it performed equally well during a follow-up trip that took place in November 2017.

Like other drought-defying waterfalls in the Otway Rainforest area (such as Beauchamp Falls and Triplet Falls), this waterfall had a healthy flow and the rainforest setting was misty, green, and lush.

Being on the heritage listed Aire River, it was little wonder that the healthy drainage coupled with the wet climate resulted in the reliable flow of the falls.

As we were touring the Great Ocean Road, we would consistently see Hopetoun Falls appear frequently on post cards and calendars.

And after having seen it in person, we could understand why this was the case.

After all, it featured a pretty satisfying 30m plunge with a classic rectangular shape, but its lush fern-fringed surroundings was really what made the falls stand out in our minds.

From the little parking bay for Hopetoun Falls (see directions below), we began by taking a very short 30m stroll (wheelchair-accessible I’m sure) to the upper viewing deck.

From here, we were able to look down at the waterfall through some foliage blocking a fair bit of our line-of-sight.

It wasn’t the greatest of views and it certainly left us wanting to see more.

So we continued on the walking track which required us to descend some stairs until it eventually flattened out alongside the Aire River.

After a short stint walking in the upstream direction alongside the river, we ended up at a lookout platform containing a bench and the signature view of the falls.

With such peaceful settings and sturdy railings to facilitate attempting long exposure photographs without a tripod, this was a very photo-friendly waterfall.

After having our fill of the falls, we would go back up the steps to the car park to complete the 1km walk.

Overall, on our first visit here, we had spent about 40 minutes away from the car at a very leisurely pace.

On our second visit to the Hoopetoun Falls in November 2017, one unfortunate visitor managed to break her ankle on a misstep.

That resulted in some additional delays so the medics could do their job to help stabilize the ankle and stretcher her out.

Perhaps more importantly, that underscored the notion that even on a simple track like this, care must be taken to wear sturdy shoes with traction and to pay attention to one’s surroundings.

You never know when Murphy strikes.

Hopetoun Falls resides in the Great Otway National Park near Apollo Bay, Victoria. It is administered by Parks Victoria. For information or inquiries about the area as well as current conditions, visit their website.

We’ll describe the driving route to Hopetoun Falls from Beech Forest, which was about 67km (an hour drive) east of Port Campbell or 40km (under an hour drive) north-northwest of Apollo Bay.

Both approaches minimize the amount of unsealed driving.

From Beech Forest, we drove east on the Beech Forest-Mt Sabine Road (C159) for about 1.3km to the Binns Road turnoff on the right.

There was signage for both Beauchamp Falls and Hopetoun Falls at this junction.

After turning right to go onto the unsealed Binns Rd, we then drove another 4.5km or so to another signposted junction.

We then turned right at this junction to go onto the unsealed Hopetoun Falls Road, and we followed this narrow road for the final 400m to its end, where there was a limited parking bay.

An alternate approach from Apollo Bay would be to take the Binns Road directly from the south at about 13km west of town along the Great Ocean Road (B100).

Then we’d follow the unsealed Binns Rd for roughly 15km or so before turning left onto the unsealed Hopetoun Falls Road.

Finally, we’d follow that road as above for the final 400m to the car park at its end.

Right to left sweep of the Aire River leading up to the falls, where the video ended with a zoom-in on the falls itself 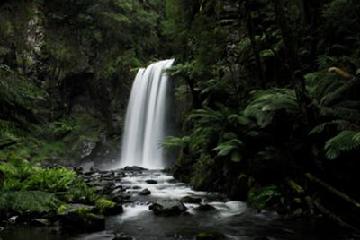 Hopetoun Falls April 30, 2010 3:05 am by Avalanche - Hopetoun Falls: After winter would be the best time to capture this beauty through the camera lens. I liked the volume of water flow during this period. A moderate walk for about 15 mins should take you to the base of the waterfall. ...Read More
That’s Pretty High! (Hopetoun Falls) August 10, 2008 9:46 am by Dillan - Hey there! This website is just absolutely great! I love waterfalls and I have learnt much more from this website. Anyway, just come to talk about Hopetoun Falls in the "Otways". We've been there and we all liked it. I didn't know it was 30 metres high though. That's pretty high! The walk to the… ...Read More