Hopkins Falls was our waterfalling excuse to visit the quieter west end of the Great Ocean Road near the coastal town of Warrnambool.

It was a short but wide waterfall on the Hopkins River (said to be 11m high and the widest in the country at 90m).

Thus, it was flowing even during our drought-affected visit back in November 2006, where that drought lasted for the better part of the decade.

During a return trip back to the area in November 2017, the Hopkins River had significantly more flow and the picture you see above was an example of the falls in such a healthier state.

I’m guessing that a couple of days of heavy rains had rejuvenated the watercourses of Western Victoria during that return trip.

Flanked by wide open agricultural fields that were once part of a wide field of flowing basalt lava, the falls and its surroundings were easily seen from a handful of lookouts all within close proximity to the car park.

We were able to experience all of these lookouts to better appreciate the falls from different angles while also reading the interpretive signs to get a better appreciation of its history and significance.

Overall, we spent about 30-45 minutes away from the car to take it all in, but the physical exertion was pretty minimal.

The lookouts nearest the car park revealed the Hopkins River upstream of the brink of the falls as well as the bridge (built in 1938) traversing the river.

This bridge was once the site of a treacherous ford claiming lives and resulting in several rescues during the days of European settlement in the late 19th century.

The lookout nearest to the brink of the Hopkins Falls had a handy “Fotopol”, where I was able to screw on my DSLR camera for people shots and long exposure shots without the need for a tripod.

Another 105m down some steps led to a lower lookout that also possessed a Fotopol in addition to the lower and more intimate vantage point of the Hopkins Falls.

According to the signage, three aboriginal clans (Kirrae whurung, Gundidj-mara, and Tjap whurrung) would gather around the area to catch abundant eel, share food, and socialize.

The indigenous name of the falls was said to mean “eels bite the stones” in the Kirrae whurung tongue.

The eels were said to have migrated from as far as the tropical waters of Vanuatu to spawn.

More recently, the river (and falls) got its name from Major Thomas Mitchell who named it in honour of his friend Major John Paul Hopkins.

Both of them were amongst the early European explorers attracted by the abundant water and rich volcanic soil (and hence the agricultural presence we noticed during our visits).

Hopkins Falls resides in the Hopkins Falls Scenic Reserve near Warrnambool, Victoria. It is administered by Parks Victoria. For information or inquiries about the area as well as current conditions, visit their website.

We’ll describe the driving route from Warrnambool since that was the nearest major town along the Great Ocean Road.

Leaving Warrnambool, we drove east on the Princes Highway (A1) for about 8km east of the A1/B120 intersection.

There was a signpost pointing left for Hopkins Falls, and so we followed the sign and turned left onto the Allansford-Wangoom Road. Note that this turnoff was just west of the town of Allansford.

We then drove about 6.5km on the Allansford-Wangoom Road to the Hopkins Falls Road, where we then turned right (as also instructed by the signs).

We then followed the Hopkins Falls road for the next 4km before turning right into the car park just before the bridge over the Hopkins River.

Overall, this drive took us less than 20 minutes.

There were also alternate routes to what we described earlier.

One such route was to follow the B120 from the A1 in Warrnambool before turning right onto the Wangoom Road, then taking that road towards the Hopkins Falls Road.

Another approach was to stay on the Princes Highway (A1) east of Warrnambool then turning left onto a narrow Dwarroon Rd before turning left onto Hopkins Falls Rd and following it past the Hopkins River to the car park.

To give you some geographical context, Warrnambool was about 29km east of Port Fairy, 62km (under an hour drive) west of Port Campbell, 100km (75 minutes drive) southeast of Hamilton, and 266km (about 3 hours drive) west of Melbourne via an inland route. If taking the Great Ocean Road all the way from Melbourne, then this distance would be 355km (about 5.5 hours drive). 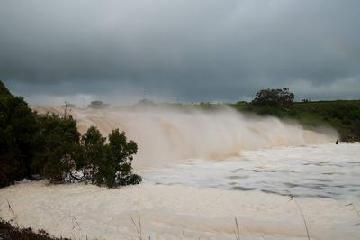 Hopkins Falls at full flow October 20, 2010 7:28 pm by Aaron Nuffer - We visited this falls in August 2010. The recent wet weather had the falls at a very high flow, and the spectacle was bringing in many of the locals to come and gawk at the sight. The park was full, and visitors were parking along the main road outside the park to get a look.… ...Read More