King George Falls was a very remote dual waterfall that we happened to see as part of the larger Mitchell Falls Explorer day tour.

We made it a point to see this waterfall given the lure of its natural settings in an area that was pretty devoid of people.

In addition to that, we also learned that this waterfall was said to have an uninterrupted vertical drop of over 80m, making it the tallest such waterfall in the state of Western Australia (or WA).

Truthfully, we can’t say one way or the other how true these claims were, but the fleeting views that we were able to get of this falls definitely left us wondering what a closer look at the falls might have been like.

That said, we weren’t exactly sure how one might typically arrive at this waterfall as part of a land-based tour package.

Instead, we jumped at the chance to visit this waterfall along with Mitchell Falls as part of a longer day tour that encompassed a lot of flying in a twin propeller plane.

Our tour was based in Kununurra, which made sense for our decision to stay at that town as the base for such remote Kimberley expeditions.

As you can see from the photo above, it was not easy to photograph the falls due to the shadows induced by the recesses of its own gorge.

We were given multiple passes at taking photos of the falls from the plane, but they were distant for the most part.

I’d imagine that the falls might flow much more impressively during the Wet Season.

However, we happened to time our visit for the start of the Dry Season, where even a late season cyclone just a month earlier didn’t quite maintain its flow very well.

Thus, I’d imagine the falls wouldn’t last too long once the Wet Season would end.

King George Falls resides in Kimberley Region near Kununurra in Western Australia. It is administered by the Western Australia Government. For information or inquiries about the area as well as current conditions, visit their website.

Since we witnessed this waterfall as part of the Mitchell Falls Explorer Tour, see the directions on the Mitchell Falls page for specifics. The bottom line is that the aerial tour that we took started and ended at the WA town of Kununurra.

To give you some context of the remoteness of this area, Kununurra was 827km (about 10 hours drive) southwest of Darwin and 1,044km (about 11 hours drive) east of Broome. 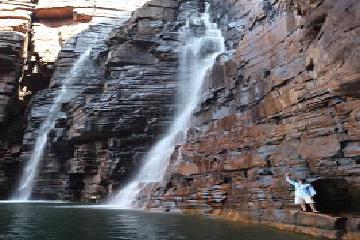 King George Falls are Awesome! October 6, 2011 1:06 am by Tay Plain - I'm a cameraman for a fishing show and on a charter through the Kimberly we stopped over at King George Falls during the dry season. The boat ride up King George River from the coast was incredible! The red cliffs were like nothing I've ever seen before anywhere in Australia! We got our boat right… ...Read More