Lesmurdie Falls was probably the closest waterfall that we saw to the city of Perth.

Actually, it was in one of the more immediate outskirts of the city, and we had a little bit of trouble finding the falls since it was well within the maze of suburban developments.

Sometimes I found it more difficult to find such waterfalls because following the signs (or lack thereof) made it a bit tricky to know where we were supposed to go.

In any case, what we ended up doing was to park near the top of the falls while checking out the views from up there.

Then, we hopped back in the car and found our way to the nearest car park at the base of the falls where we were able to get the view you see at the top of this page.

That said, we probably could’ve walked to the base of the falls and back (or vice versa), but I guess we were lazy.

As you can see from the photos on this page, the falls wasn’t flowing very well during our June 2006 visit.

We weren’t sure whether Perth was undergoing a drought or if we happened to show up before the Winter rains showed up and filled their water table.

Thus, the scenic rating score reflected our experience though I’m sure if we’re fortunate to return here under better circumstances, that score will change.

Still, having been familiar with temperamental waterfalls like this back at home in Los Angeles, I’m sure Perth residents have the ability to pay more attention to the weather and climate to time their visit for when the falls would become more photogenic.

At least on our visit, we were able to get a nice panorama in the direction of Perth City from the top of the falls as an added bonus to our waterfalling here.

It was a pretty short walk from the car park at the top of the falls to the lookout and the trail providing us a sideways view of what little water was left in Lesmurdie Falls.

As for the other starting point of the trail (see directions below for both starting points), we walked on a pretty obvious trail along the Lesmurdie Brook leading right up to the base of the falls (as pictured at the top of this page).

Lesmurdie Falls resides in the Perth Hills. It is administered by the Western Australia Government. For information or inquiries about the area as well as current conditions, visit their website.

Given the maze of city and suburban streets around Perth, it can get a little confusing finding the falls. The key is to find Welshpool Rd (Road 35). There are many ways of reaching this fairly high-speed expressway as it stretches from as far west as the Shepperton-Albany Hwy (Hwy 30), but it also connects with Hwy 7 (Leach Hwy), Hwy 3 (Roe Hwy) as well as the Hwy 4 (Tonkin Hwy). We’ll pick up the driving directions from the Tonkin Hwy at the Welshpool Rd exit.

To access the base of the falls, continue east on Welshpool Rd (Route 35) for about 1.6km to the Lewis Rd turnoff on the left. Then take Lewis Rd for about 1.6km to Palm Tce and turn right. At the end of Palm Tce is the car park and picnic area for Lesmurdie Falls National Park. This car park and picnic area was the start of the short trail that follows Lesmurdie Brook to the base of the falls.

To access the top of the falls, the most straightforward route (although not the shortest) would be to take Welshpool Rd (Road 35) east for about 5km to Lesmurdie Rd. Then, turn left and follow Lesmurdie Rd north for about 2.8km to Falls Rd. Turn left onto Falls Rd and take it for at least 2km until you see a large car park area. From there, you take a short downhill walk towards the top of the falls.

The trail actually connects with the trail at the base if you’re interested in extending your stay and minimizing the amount of driving. 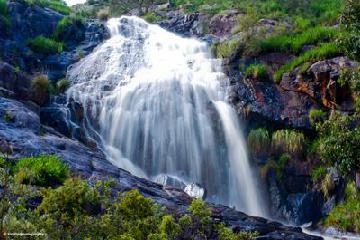 A wet August day walk. (Lesmurdie Falls) November 23, 2012 9:36 am by Terry Osborne - I read about the falls on this site after searching online for things to do in WA, my 15 year old was over from the UK and I wanted to show her the sights. I can recommend tackling the falls from the bottom as this was a pleasant walk (even though it rained on and… ...Read More 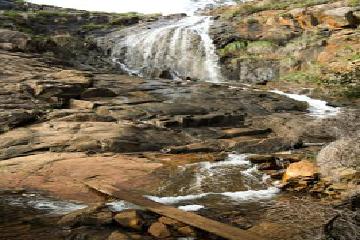 I wrote all about this “secret waterfall” July 1, 2012 6:54 am by Nate - It's pretty rare that such a beautiful waterfall can be found in the suburbs of a city - especially a city as dry as Perth. ...Read More

Lesmurdie Falls May 2, 2011 10:04 pm by Graham Blissett - Back in 1965 I was living in Perth - now live in England - and I used to go to Lesmurdie Falls a few times. The photo is of me, Graham Blissett, and Mrs Jefferies whose house I stayed at in Queens Park for three years. As you can see, the falls were in full… ...Read More