Liffey Falls was a series of four distinct waterfalls on the Liffey River where each of them had distinct characteristics as well as unique names.

Although Liffey Falls referred to the entire ensemble of waterfalls, it could also be referring to the last waterfall in the group, which was the tallest and widest of them all.

The picture you see above was that waterfall.

Our Sketchy History with Liffey Falls

Each time we visited Liffey Falls, we came with some expectations because of its presence on numerous postcards and calendars in random shops throughout Tassie.

Indeed, it seemed to compete with Russell Falls for the title Tasmania’s prettiest waterfall.

In addition to the falls itself, there were also giant eucalyptus trees towering over the fern-filled rainforest.

This further added to the wild ambience of this Tasmanian Wilderness World Heritage Area.

While there was no doubt that Liffey Falls held its own in the scenic department, it seemed like on each of our visits, the falls didn’t show off its full self.

Our first visit occurred in November 2006, which was a time when even Tasmania wasn’t immune to the nearly decade-long drought that gripped most of Southeastern Australia.

I came back here in November 2017 when it was starting to rain, but even that year, it seemed like Tassie’s eastern side was struggling to get precipitation in its Winter and Spring months.

The rain that inconvenienced me on that latter visit was too little too late as far as seeing it with the goal of more volume was concerned.

So perhaps it was bad luck on our part that our experiences didn’t quite live up to what we had seen in the literature.

That said, the Liffey River tended to flow reliably because it drained a large catchment in the Great Western Tiers.

In our visits, we took the shortest walking path from the upper car park (see directions below).

There was also a lower car park, but that involved a longer hike and it was more for tour buses and longer vehicles unable to handle the narrower, twistier road to the upper car park (which was the site of a former logging camp).

Almost right from the start, there was a 75m spur track leading from the opposite end of the upper car park to one of the giant eucalyptus trees, which was said to be 50m tall with a diameter of 3.39m.

The size of this giant tree reminded me of kauri trees in New Zealand or Sequoia trees back in my home state of California.

It made me start to think that this area was incorporated as a world heritage area in part to stop the logging that was taking place here from the 1900s up until the 1960s.

After checking out this intriguing tree, we then went to the other end of the car park, where the signs led us onto the 1km track said to be 45 minutes in each direction.

The track descended as it wandered beneath the forest canopy that started off as a eucalyptus forest but became a denser fern-filled rainforest the deeper we went.

The tree cover was actually pretty convenient when it did rain as it appeared to have provided adequate cover until the rains turned into a downpour.

The scenery persisted like this for about the first 500m.

Eventually, the track skirted the southern banks of the Liffey River, where the forest opened up over the ancient watercourse.

That was when we started to encounter the first of the cascades (Alexandra Falls).

There was a lookout just upstream from its top as well as another lookout providing an awkward view of both the first cascade and the second cascade (Hopetoun Falls).

Further along the track, I managed to get a glimpse of what could have been a post card shot of the first two waterfalls through the foliage.

It made me wonder if an off trail stream scramble could have yielded a Liffey Falls-type shot showing off multiple layers of cascades dropping in succession over the sandstone bedrock.

I didn’t do such a scramble, but from some of the faint trails of use going to the river, I could envision others might have attempted this.

About another 150m further along the track, there was an overlook for the third cascade (Albert Falls or Spout Falls or The Leap).

The first time we were here, we managed to get a somewhat clean look at its aptly-named drop from the official lookout, but 11 years later, it appeared that the view was mostly blocked by overgrowth.

The cleanest views were actually from its side and not from the developed viewing area.

Another 100m beyond the third falls (or Albert Falls), the track then arrived at a trail junction.

We took the spur path on the left to descend the rest of the way upstream to the Liffey Falls.

The trail on the right continued another 90 minutes to the lower car park and campground.

Once we made it to the end of the track, we were presented with an angled look at the attractive multi-tiered Liffey Falls (which could also be called the Victoria Falls).

On our first visit here, it was a sunny day and the lighting was non-ideal against this east-facing falls.

That said, with the relatively low flow of the Liffey River, we carefully made our way across the slippery sandstone bedrock for more frontal views of the falls, which I’d argue was best photographed and seen from there.

On my second visit, it had started to rain hard so I was unable to take the risk of slipping and sliding my way across the river for a similar view (especially if there was a chance of flash flooding).

After having my fill of the Liffey Falls, I then went back the way I came, which was pretty much all uphill.

Thus, this was an upside down hike though at least I was able to catch a few breathers by re-experiencing each of the smaller cascades on the way back up.

Overall, on each of our visits, we spent around 75-90 minutes away from the car.

The confusing signage at the trailhead couldn’t decide if it was 45 minutes one-way (2km total) or 45 minutes return (1km total).

But after our visits, it was pretty clear which one was correct.

Liffey Falls resides in the Lilydale Falls State Reserve near Deloraine, Tasmania. It is administered by the Tasmania Parks and Wildlife Service. For information or inquiries about the area as well as current conditions, visit their website.

Although the nearest town of significance to the Liffey Falls was Deloraine (also the gateway to many other hikes in the Great Western Tiers and Meander Valley), we were based in the city of Launceston.

So we’ll describe our driving route from the city.

From the Launceston CBD, we made our way south to the Hwy 1 or Midland Highway (the one-way Wellington St would eventually merge onto the Hwy 1 southbound).

We followed the Bass Hwy for roughly 43km to the Meander Valley Road exit.

One thing we’ve learned from experience was that about 16km along the Bass Highway, there was a sign pointing the way to Liffey Falls at the C511 exit for Carrick and Bracknell.

If time is of the essence, I’d avoid taking that narrower and twistier “scenic” route and stick with the Meander Valley Road exit another 27km further.

We then followed the A5 into Deloraine before continuing on the A5 south on the East Parade Rd eventually becoming the Highland Lakes Rd south of town.

At about 7km south of the town centre of Deloraine, we then turned left at the fork and continued along the Highland Lakes Rd (A5) for the next 16km.

This led to a signed turnoff on the left to take us onto the unsealed Riversdale Rd.

At roughly 2km after leaving the A5 on the Riversdale Rd, we encountered a signed junction.

We kept right at this junction to access the upper car park.

The left fork led to the lower car park, which was suitable for larger vehicles (campervans and tour buses).

The remainder of the drive to the upper car park (in another 3.6km) was pretty much nearly single-lane unsealed road with a few rough spots but totally doable by 2wd passenger cars.

Overall, this drive took around 75 minutes.

Downstream to upstread sweep of the main drop of the falls


Profile view of the second cascade


Profile view of the main cascade


Direct view of the main cascade 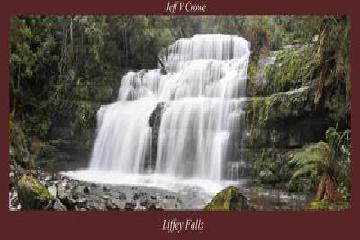 Liffey Falls May 6, 2014 6:17 am by Jeff Crowe - Liffey Falls are found near the head of the River , upstream of the town of Liffey in Tasmania , Australia . It is believed that Tasmanian Aborigines used Liffey Falls as a meeting place . It has been reported that a significant massacre by European colonists , of up to 60 of the Pallittore… ...Read More