Mathinna Falls was an attractive waterfall that seemed to have a backcountry quality about it even though the walk to reach its base was fairly short.

Technically, there were actually four waterfalls that comprised the overall Mathinna Falls ensemble, but the name generally referred to the last and most accessible waterfall of the group.

As shown in the picture above, that main waterfall was said to be on the order of 20-25m tall.

Julie and I did spot hard-to-see upper tiers of the falls during our latest excursion here in late November 2017.

However, with all the thick foliage covering the cliffs containing those waterfalls, some daring scrambling was necessary to even get a better and closer look of them.

On each of our visits, the waterfall had similar flow.

The presence of ferns suggested that the forest tended to receive a lot of rain.

Even though the area had seen a fire or two (which was evident on our hike), there was enough life and growth in the area to mask out the dead trees and blackened trunks.

The track began from a primitive car park and picnic area at the end of the Mathinna Falls Rd (see directions below).

The path immediately followed along Delvin Creek for pretty much the entire walking route.

As we proceeded along the Mathinna Falls Track, the terrain shifted from shady rainforest to more open lightly vegetated forest.

Then it flipped back to thick vegetation as the gorge walls closed in on us right at the falls.

The track narrowed and hugged the banks of Delvin Creek towards the end as the hike was a little rougher the closer to the falls we were.

When we were close enough to see the falls, we had to do a little rock scrambling in order to get the most satisfying views from within the creek itself.

The ruggedness of the final stretch of the hike hinted that rock slides might have occurred over the years between our visits.

I say this because I swore that on our first visit here in late November 2006, we didn’t have nearly as much difficulty getting a clean look at the falls as we did on our second visit.

Anyways, the overall distance of the hike was on the order of 1.2km round trip, which took Julie and I about 45 minutes to complete.

Although we were aware of the upper waterfalls, we didn’t attempt to reach them in either of our visits.

Anecdotally, we’ve been told that doing the rough scramble to go higher could be done, but it was risky.

We didn’t even know where to begin such a scramble.

However, if I had to guess, I recalled that at about 360m from the trailhead, there was a sign pointing the way to the falls as the trail bent to our right.

That sign appeared to have concealed a faint and overgrown trail of use, and I suspected that any attempts to climb higher up the falls would start from back there.

Mathinna Falls resided in the Mathinna Falls Forest Reserve near St Marys, Tasmania. It is administered by the Break O’Day Council. For information or inquiries about the area as well as current conditions, visit their website or Facebook page.

Mathinna Falls was in a fairly undeveloped forest in the northeast of Tasmania.

We managed to get here from two different approaches – one from Hobart and another from Launceston.

The key to our visits in both cases was to get to the town of Fingal before heading north into the forests.

So we’ll first describe how to get to Fingal from Launceston then describe how we got to the falls going north from there.

Later on, we’ll describe how we got to Fingal from Hobart.

Although I’m aware that there could be other ways to get here, in my mind, these routes minimized the amount of unsealed driving from the two most populous cities in Tassie.

Driving from Launceston to Fingal

From Launceston CBD, we headed south towards the Midland Hwy (Hwy 1).

Then, we kept going south in the direction of Hobart to remain on the Midland Hwy.

At around 54km south of Launceston, we then left the Midland Hwy and turned left onto the Esk Hwy (A4).

After about 51km, we entered the town of Fingal, where a sign pointed the way to our left for Mathinna Rd (B43).

Driving from Fingal to Mathinna Falls

We followed Mathinna Rd (B43) for about 25.5km to the town of Mathinna (note the Evercreech Forest Reserve access was along the way here).

Then, we turned right onto the Mathinna Plains Road (C423).

At about 1.3km, we then turned right onto Claytons Rd (I finally started seeing Mathinna Falls signs here).

Then, after 900m another sign had us turn left onto Mathinna Falls Rd.

From there, I pretty much followed the signs the rest of the way along Mathinna Falls Rd to the car park.

The last 6km of the drive was unsealed, and the rock was progressively rougher with potholes and washboards the further we went.

The final 600m was practically single lane road with some fairly bad ruts and gullies.

Even though we made it with a low clearance 2wd vehicle, there were a couple of sections at the end where we had to take it slow.

Overall, it took us just under 2 hours to do this drive.

Driving from Hobart to Fingal

From Hobart, we made the long drive north about 207km on the Tasman Hwy (A3) towards the Chain of Lagoons.

There was a little shortcut on Elephant Pass Rd (leading to the town of Gray) on the left, which eventually allowed us to turn left onto the Esk Hwy after 16km at St Marys.

It was also possible to remain on the A3 for another 22km beyond the Chain of Lagoons before turning left onto the Esk Highway (A4) and taking it for about 10km southwest to St Marys.

Anyways, once we were on the Esk Hwy at St Marys, we went west for another 20km to the turnoff onto Mathinna Rd (B43) at Fingal.

Then, we followed the directions as above from Fingal to Mathinna, then to the falls.

For some geographical context, Launceston was about 103km (over an hour drive) east of Devonport, 167km (over 2 hours drive) west of St Helens, and 201km (nearly 2.5 hours drive) north of Hobart. 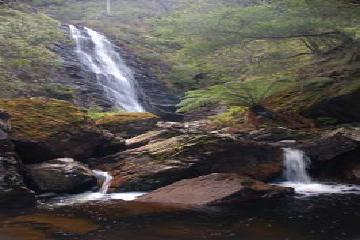 The AGONY And The ECSTACY (Mathinna Falls) May 7, 2009 10:55 am by Ian Smith - It bode ill. "I can't remember the last time it rained," the man in Devonport had said. And there I was looking forward to photographing waterfalls. Things change though; by the time I reached St. Helens two days later I listened to the news and they said Mathinna had had 52 mm. Fate had dealt… ...Read More
A World Away (Mathinna Falls) August 3, 2008 10:02 am by Ian Smith - I was looking for waterfalls, unashamedly searching the internet for them. Thus it was that I came across Mathinna, situated in an area I'd never been before; but Tassie's like that, there's all sorts of stuff just off the main roads if you're prepared to venture. To get there you have to find Fingal, west… ...Read More