Mena Creek Falls is an impressively thick waterfall dropping roughly 15-20m on Mena Creek over an ancient basalt cliff (said to be over 7 million years old) on the Cassowary Coast.

I tend to associate this waterfall as “semi-public” because you can experience it for free from a public lookout as well as its brink across a bouncy suspension bridge.

However, it’s best experienced from within the private Paronella Park, which gives you many more viewing angles compared to the public viewing areas.

There’s also an opportunity to feed eels, turtles, and fish in addition to checking out ruins, kauri trees, and even a side waterfall called Teresa Falls.

So this diversity makes a visit to Paronella Park more of a family friendly experience, especially when you consider how much you’re paying for to get into the park (more on that later).

Experiencing The Public Side Of Mena Creek Falls

The public experience of Mena Creek Falls starts from a sloping grassy picnic area on the other side of Mena Creek from Paronella Park (right across the street from the Mena Creek State School).

From there, we noticed a trail past a real smelly toilet before the path descended into the rainforest and towards the banks of Mena Creek.

Once at the bottom, we arrived at the public lookout which yielded only a partial view of Mena Creek Falls.

The view was partial mostly because of a large tree where one of the branches drooped low enough to block a good portion of the view.

So after getting our fill of this viewpoint, we then backtracked to the sloping picnic area, where we proceeded to walk on the bouncy suspension bridge over Mena Creek.

On the bridge, Mena Creek Falls was immediately downstream so it wasn’t the greatest view of the falls.

However, we definitely felt the precariousness of being suspended over the rush of water about to plunge over a cliff.

Looking upstream, we saw the modifications to Mena Creek, which resulted in some cascades upstream of the falls.

Once we were on the other side of the bridge, we were then at the entrance to Paronella Park, where we proceeded to queue up to pay for the admission to get into the private area.

Experiencing The Paronella Park Side Of Mena Creek Falls

After paying for our ticket (which in June 2022 was $52 USD per person and $29 USD for our daughter; quite expensive for a waterfall), we then had an option to wait for a guided tour or just self-tour.

We opted to do the self-tour in the interest of time, but given the amount we paid to get into Paronella Park, you really get your money’s worth if you take your time and fully explore the park.

We started off by following the well-developed path beyond the cafe and meeting area towards a castle-look structure before cutting to the hydro plant butting right up against the brink of Mena Creek Falls.

This allowed us to get a much closer and more intimate look at the waterfall that we hadn’t been able to get to this point.

Continuing further downstream away from the brink of the falls, we went past the ruins of a “castle” before going towards the Grand Staircase.

Once at the bottom of this flight of steps, we found ourselves at the level of the plunge pool beneath the falls, where we naturally proceeded to the edge of that pool.

There were picnic tables and railings here, where the latter was probably an attempt to keep people away from the possibility of encountering a crocodile (there were also warning signs).

It was at the edge of the railings against the plunge pool where our daughter was happy to feed turtles, fish, and an eel that would swim up and fight for the feed that the cafe and shop provided.

While our daughter was occupied, this part was also perhaps the best place to witness the Mena Creek Falls since we were pretty much right across its plunge pool for that satisfying frontal look.

As far as experiencing the waterfall was concerned, this was the extent of the visit, and the rest of the exploration of Paronella Park would not be about this waterfall.

Experiencing The Rest Of Paronella Park

In case you’re curious about what else park had to offer, there was actually a pretty extensive area to explore.

Such things to check out included more interesting Spanish-inspired structures, kauri trees, a turtle nesting area, palm trees, a bamboo grove, a “Lover’s Tunnel”, and even a second waterfall.

While experiencing Mena Creek Falls (both public and private parts) probably took us the better part of 30-45 minutes or so (and we really took our time), I spent an additional hour or so exploring the rest of the park.

The main goal was to visit Teresa Falls, which was a diminutive 3-5m waterfall situated just beyond the other end of the Lover’s Tunnel (which was closed during my June 2022 visit).

I recalled there being bats flying back and forth within that tunnel, but since it was closed, I had to go around the tunnel to reach the waterfall.

Along the way, I explored the other parts of the park taking in a line of kauri trees, a bamboo grove, a line of palm trees, and a turtle nesting area.

Anyways, Teresa Falls was pretty much the extent of my extended visit before having my fill and returning to the cafe.

That said, I know there was still more to the park that I didn’t get around to exploring so that’s why I’d say that to really get your money’s worth, you’ll really want to spend time and explore as much of the park as you can.

By the way, if you do run out of time, we had the option of registering our visit to enable our ticket to be valid for another 2 years (of course that’s contingent upon coming traveling here again).

Despite the high price of admission, Paronella Park was surprisingly very busy during our late June 2022 visit though I’m still a bit stumped as to why (did we miss something?).

Mena Creek Falls resides in Paronella Park near Innisfail, Queensland. Although there’s a limited public viewing area, I believe it is administered by the Estate of Paronella Park. For information or inquiries about the area as well as current conditions, visit their website.

Mena Creek Falls is pretty much resident in Paronella Park, which was about 19km south of Innisfail.

From Innisfail CBD, we’d drive south for about 2km along the A1 towards its turnoff at River Ave.

Then, we’d drive about 17km following signs for Paronella Park, where the route would eventually become Japoon Rd.

The car park for Paronella Park was on the left before the bridge over Mena Creek.

Beyond the bridge, there were more public parking spaces on the left side of the road right across from the Mena Creek State School.

Overall, this drive would take less than a half-hour.

Partial view of the falls from the public lookout 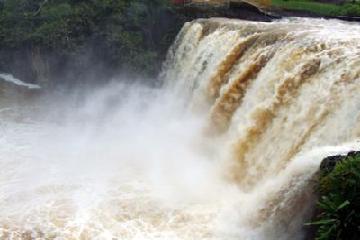 Mena Creek Falls May 10, 2009 8:10 am by Alan Maxwell - Just happen to get to Mena creek falls near Innisfail, Queensland just after some heavy rains. It is quite a sight to see. ...Read More