The Morialta Waterfalls (or Morialta Falls) seemed to be one of the favourite spots for Adelaide locals and visitors alike, which was very evident on our latest visit there when the place was busy with weekenders.

There was even a guide we met at Seal Bay on Kangaroo Island who (upon learning that we were into waterfalls) got nostalgic on us and said she would always come to the falls as a kid while growing up in the city.

As you can see from the photo above, the popularity was with good reason.

After all, the falls dropped perhaps around 40m or so surrounded by picturesque red vertical cliffs in naturesque lands within a half-hour of local driving from the city centre (see directions below).

The waterfall you see pictured above was the First Falls, and it was said to be the largest of the three.

There were separate tracks joining in a loop that took in the Second and Third Falls as well as the top of the First Falls, but they were pretty much separate excursions from the much shorter and easier Morialta Falls Valley Walk.

For the purposes of this writeup, we’re just focusing on the Morialta Falls Valley Walk since that was the only track we’ve done in our visits here.

In case you’re curious, the Three Falls Grand Hike (on the Morialta Falls Plateau) was said to be a 7.3km loop hike requiring about 3.5 hours.

Our History with the Morialta Waterfalls

As alluded to earlier, Julie and I actually made multiple visits to this waterfall.

On the first time we showed up back in November 2006, it was dry as it didn’t stand a chance against a severe multi-year drought that gripped all of Southeastern Australia for much of the decade.

Our latest visit in November 2017 was in the midst of Spring though the last heavy rainfall was probably at least a month prior to our visit.

Thus, I’d imagine this waterfall would be best experienced in the Winter and Spring months depending on when the last significant rainfall had occurred as well as how much cumulative precipitation had fallen that season or year.

According to the park signs, the origin of the name of the falls was apparently a bastardization of the word Moriatta in the Kaurna Aboriginal language.

It was said to mean something like “ever-flowing creek”, which might have been the state of Fourth Creek when the first peoples inhabited this area.

The creek no longer has perennial flow due to dams and bores that were built since the advent of European settlement since the 1840s.

Since Fourth Creek was the watercourse responsible for the waterfalls here, this also meant that they once had perennial flow before European intervention.

Hiking to the First Falls

As for the visit itself, from the Morialta Falls car park, we followed a well-developed, well-signed, and mostly gravel track meandered on a mostly flat or gradual slope in a wide valley.

Initially, the valley was wide and the track was flanked by some bush and trees, including some taller white-barked eucalyptus trees.

While we encountered some colorful birds along the track, Julie and I were fortunate enough to see koalas on some of these gum trees the first time we were here back in 2006.

The track also gently weaved its way alongside and over Fourth Creek.

Given that this was the creek responsible for the Morialta Waterfalls, then it would be a good sign that the waterfall will have life if you happen to see the creek flowing alongside the trail.

Anyways, the further along the track we went, the more the valley walls closed in.

Soon, we found ourselves walking amongst impressive reddish cliffs hinting at the geological forces that gave rise to the waterfalls here.

There was even a spur trail going up steps to the Giant’s Cave, which was one of the accessible (albeit small) caves in the area though we noticed many more caves perched high up on other cliffs in the distance.

Eventually, the track became a boardwalk as it ultimately dead-ended at the lookout for the First Falls.

Even though the view from the lookout was good enough to get nice pictures, we did see other folks get past the railings and cool off near the plunge pool by the base of the falls.

In any case, the signage suggested that the round trip hiking time was 45 minutes to do the 1.6km out-and-back walk.

However, we spent closer to 90 minutes so we could relax, take our time, and even check out the Giant’s Cave.

That said, there were clearly other options for extending the excursion as numerous trails branched off throughout the Morialta Valley Walk.

Among these walks was the Three Falls Grand Loop, which we’ll have to do one of these days when the conditions and timing are right.

Finally, if you happened to get a late start (like on the first time we did this hike back in November 2006), we had to keep an eye on our watches and the skies the whole time because the park gates were said to close 15 minutes before sunset.

So on that first visit, we started our hike at 6pm. Thus, we didn’t have the luxury of getting sidetracked as we worked to avoid getting locked in.

The Morialta Waterfalls and Conservation Park was on the eastern outskirts of Adelaide in the Adelaide Hills.

There are many ways of getting here, but we’ll describe our route from the Adelaide CBD.

First, we made our way towards Magill Road, which could be reached via the A11 on North Terrace Rd / Botanic Rd (we actually got there via Pirie St, Bartels Rd, Flinders St, then Fullarton Rd).

Once on the Magill Rd, we continued heading east for about 5.5km before turning left onto Norton Summit Rd.

Then, we turned right at the roundabout onto Morialta Rd and followed it for roughly 600m before turning right at the signposted entrance to the Morialta Falls and Conservation Park.

We followed this road for about 1.3km to its end.

Since we showed up at a pretty busy time of the morning on a Saturday, we actually had to find parking a little further back from the end of the road, which extended the overall walk.

In any case, it took us around 35 minutes to make this drive with stoplights and some mild traffic.

Stuart William Walker March 1, 2011 10:30 am by Bryan McCarthy - Sadly I only have bad news on the falls. When I was a kid of eleven back in 1972, my best friend Stuart Walker was trying to climb down at Morialta Falls, he fell and died instantly. Stuart is buried at Athelstone Cemtetery in Adelaide, South Australia. ...Read More 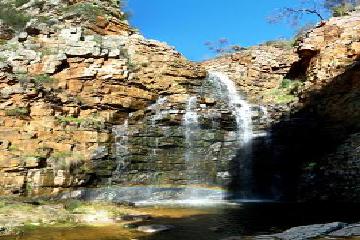 Morialta Falls May 6, 2009 8:19 am by Grant Hugo - The walk from the car park to the base of the falls takes around 15 to 20 minutes, has a slight gradient all the way, and is very enjoyable in all seasons. There is a boardwalk and platform at the falls. It is also wheelchair accessible and the paths are smooth all the way with… ...Read More