Nigretta Falls (a lady from the visitor centre in Hamilton pronounced it “NYE-gret-uh”) was pretty much a mandatory stop for us since it was very close to and easily accessible from Wannon Falls.

This was where the Wannon River fell some 15-20m or so over an exposed reddish cliff composed of the harder erosion-resistant rhyolitic layer.

This layer was indicative of the history of volcanism in the region west of Hamilton in the Southern Grampians Shire.

As you can see in the photo above, we happened to see the falls as a single segment.

However, the falls could branch out into multiple segments if the Wannon River would have more significant flow during a rain storm in the Winter months.

Under such higher flow conditions, we could understand how some people in the literature might refer to this waterfall as a “Little Niagara Falls“.

On that first visit, the Wannon River really didn’t stand a chance against a combination of a drought that dominated the decade along with water diversion for the extensive agriculture in the region.

Thus, we only saw it as a disappointing trickle, where not even an overnight rain storm was able to revive its flow.

Our subsequent visit 11 years later followed a couple of days of heavy and unstable thunderstorms piling on to an already more substantial water table from rains earlier in the season.

Given these observations, I’d consider this more of a seasonal waterfall despite it being on a river.

Getting close to Nigretta Falls

For all intents and purposes, we thought of this waterfall as a roadside waterfall.

There was a viewing deck right off the nearest car park in the reserve, which yielded a pleasant panorama with a more top down frontal view of the falls.

Shortly to the right of the viewing deck, there was a set of steps descending to the opposite edge of the plunge pool.

At the bottom, we were able to get a closer and more imposing look at the falls and its underlying cliffs.

Given the amount of brownish foam in the Wannon River, we suspected that the agricultural runoff draining into the river system might have also polluted the watercourse.

Thus, it might not be wise to swim here even on a hot day.

Finally, it was worth noting that this waterfall tended to face west.

That meant that coming in the morning on a sunny day resulted in us looking right against the sun.

So we knew that on a return trip, we had to come back here in the afternoon, when the sun would backlight the falls.

This was the case on our November 2017 trip (at least when the storm clouds didn’t block the sun).

It confirmed to us that the best time of day to take photographs was indeed in the mid to late afternoon.

We were able to reach Nigretta Falls from Hamilton by driving west on the Glenelg Highway (B160) for a little over 7km before a sign pointed us to turn right onto the Nigretta Road.

Taking that turnoff, we then drove a little over 4km to the signed Wannon-Nigretta Fall Road.

Turning left onto this road, we then drove over 3km to another signposted turnoff, then we turned right to go into the reserve.

Once in the reserve, we continued another 600m towards the circular car park and viewing deck.

Overall, this drive took us about 25 minutes, where most of the time was spent getting past the traffic lights and roundabouts within the city.

Alternately, we could also drive to the Nigretta Falls from the Wannon Falls picnic area (assuming we were visiting Nigretta last instead of first).

From the picnic ground, we drove onto Camerons Rd, then headed north for roughly 350m to the Glenelg Highway.

Turning right onto the highway, we then turned left onto Wannon-Nigretta Fall Rd (opposite the Morgiana Rd) after about 700m.

Then, we followed the Wannon-Nigretta Fall Rd for about 7.5km or so before turning left into the reserve.

This alternate route took us on the order of about 15 minutes.

One thing worth noting about the roads in Volcano Country was that we encountered a few kangaroos in one morning when we showed up back in November 2006.

Having had the misfortune of damaging a rental car from colliding with a kangaroo during a separate Australia trip, believe me when I say you’ll want to go slow and stay alert for them.

They seem to have a tendency to cross the road and hop right in front of the car when they panic and aren’t able to control where they hop to in their frantic scramble to escape danger.

Sweep checking out the falls from the observation deck

4k Australia November 5, 2016 8:38 am by David Holman - I visited these falls after filming the floods .the locals said that this is the best they can remember the falls flowing . You are welcome to use any of the video on the site ...Read More 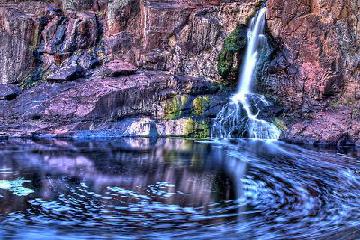 Nigretta Falls June 17, 2012 3:02 am by Sarah Donoghue - I visited the falls in 2011 and they were flowing very nicely and I got some awesome photos, one of which I have attached. I've seen photos of the falls with lots of water coming over them, but I don't think they are as spectacular. I enjoyed this waterfall much more than the near by… ...Read More 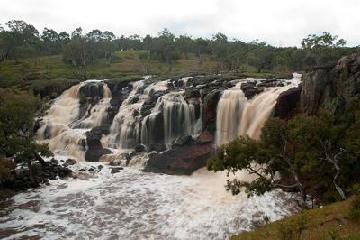 Nigretta Falls at full flow October 20, 2010 7:18 pm by Aaron Nuffer - Visited in August 2010, and Nigretta Falls was flowing very well - some of the trees at the base were submerged in the river. ...Read More