Oldaker Falls was essentially an urban waterfall that was the centerpiece of Burnie Park, which itself sat within the city of Burnie.

The waterfall sat at the top end of the hilly park where Stoney Creek dropped beneath Oldaker Street as the watercourse made its way through the park on its way to the Bass Strait.

Julie and I felt that this waterfalling excursion was unusual in that we were strolling through more of an urban recreational park instead of hiking in a reserve.

That said, the lush surroundings within the park also made it feel like we were in an island of green despite the urban developments of the bustling city itself.

Indeed, we sensed that Burnie residents could conveniently enjoy the park and its waterfall in all seasons.

And they can do so as part of a morning exercise, a lunch break, or even an after work detox as well as a good place to let the kids have play time at one of the jungle gyms here.

From its well-defined car park (see directions below), Julie and I walked the paved path past the playgrounds, amphitheatres, and picnic grounds for the unpaved walking track that pretty much followed along Stoney Creek.

It didn’t take long before the track entered more bush settings though the man-modified concrete water channels and retaining walls reminded us of our urban surroundings just beyond the trees around us.

After about 250m, we reached a series of steps that climbed above a small channel containing an intermediate man-modified waterfall before continuing further upstream to the base of the Oldaker Falls.

Once at the falls, we could clearly see more evidence of man-modified enhancements to Stoney Creek to ensure the water stayed within the channel while also maintaining a plunge pool pond to sit and relax by.

We then went up some steps alongside the cascading waterfall where it dead-ended near the base of the main upper drop and cascade.

When Julie and I first showed up back in late November 2006, the waterfall wasn’t doing so well though it was flanked by attractive pink flowers.

It was hard to tell if the flowers came from invasive weeds, which wouldn’t be surprising given all the residences around the park.

From having experience doing volunteer work to pull weeds and invasive species in wetlands and reserves, I know that most introduced species come from homes and gardens in built-up areas.

They would typically find their way to seed the protected or undeveloped parts and consequently elbow out native species.

When Julie and I came back to Burnie Park in early December 2017, Oldaker Falls had much better flow than it did in 2006.

However, its volume was aided by a powerful storm that flooded large parts of Victoria across the Bass Strait.

Such observations kind of indicated to us the degree of variability in Stoney Creek’s flow so I’d imagine the falls would be best seen shortly after a heavy rain.

Overall, Julie and I had spent a very relaxing 30-45 minutes away from the car.

This included examining the war memorial obelisks on one end of Burnie Park and taking in the waterfall at the other end of the park.

It also included checking out the historic Burnie Inn by the main car park, which was said to be Burnie’s oldest building.

Oldaker Falls resides in Burnie Park in the town of Burnie, Tasmania. It is administered by the Burnie City Council. For information or inquiries about the area as well as current conditions, visit their website.

Oldaker Falls was just west of the city centre of Burnie off the Bass Highway.

From the city’s esplanade (i.e. waterfront), we found our way to Mount St (B18) then headed south towards its intersection with the Bass Hwy (A2/Hwy 1).

Turning right onto the Bass Hwy (A2), we then drove about 1.5km before turning left onto Park St.

Shortly after turning onto this residential street, the main car park for Burnie Park was on our left just as Park St was bending to our right.

The gates for this car park close between dusk and dawn.

Note that while driving west on the Bass Hwy (A2), there was another entrance with a gate about 100m before Park St.

That was actually a short road leading to the front of the war memorial.

There was no formal parking there, which was why we’d recommend continuing further to Park St to access the main car park.

Approaching the falls at the end of the short track 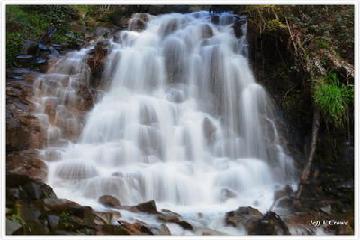 Oldaker Falls and Blocking Trees August 15, 2013 7:40 am by Jeff Crowe - In Winter I visited Oldaker Falls, a beautiful little Waterfall with heaps of flowing water . May I suggest the Burnie Council eradicate the annoying blackberries and stinking onion weed . A small tree is starting to block the view of the Waterfall . What a great attraction it could be made if the surrounding… ...Read More