Pelverata Falls was an attractively tall waterfall that was said to be 114m tall on the Pelverata Creek.

The main drop didn’t look to be that tall, but the overall height figure might have included the cascading tiers further downstream as the creek raced to the bottom of the steep ravine before eventually draining into the Huon River.

I must have been lucky on both of my visits to be seeing this waterfall flowing (especially on my second visit, whose state you can see pictured above).

That’s because I’ve been told that this falls tended to not have a long life without significant rains replenishing its creek.

On my first visit in late November 2006, the falls had a more diminished flow as much of Southeastern Australia (Tasmania included) went through a nearly decade-long drought.

Yet, it was still flowing!

On my second visit, I was told that this waterfall had been running dry until a series of strong storms hit Tasmania and Southeastern Australia during our return visit to Tasmania in November 2017.

Adding to the scenic allure of Pelverata Falls was that the same excursion yielded a second waterfall sighting.

This other waterfall was on Slippery Creek, which was aptly called Slippery Falls.

The cascading falls tumbled on the opposite side at the head of the gorge containing both Pelverata and Slippery Creeks.

Even though I was only able to get a distant look at it, a good zoom could bring it closer.

Perhaps the only trick about this additional waterfall was to not make the mistake of thinking it was the Pelverata Falls and prematurely turn back (which I almost did the first time I came here).

In any case, given all these impressions, I tended to think of Pelverata Falls excursion as one of Tasmania’s more rewarding ones despite its apparent need for a little luck and good timing.

Although Pelverata and Slippery Falls were within about an hour drive from Hobart, this was one waterfalling excursion where I had to earn a viewing for.

It involved hiking around a private farm before entering a pocket of native old growth forest, then it climbed steeply on rocky terrain before descending steeply to the overlook yielding the view you see pictured at the top of this page.

In each of the times I’ve done this hike, it took me between 2.5 to 3 hours to complete the roughly 6km round trip distance.

That said, there was definitely plenty of time for solitude and tranquility as it didn’t seem like this track saw a lot of visitors.

Indeed, in the two times I’ve done this hike, I only saw one other visitor who was a local going for a morning walk with her dogs.

The rest of the time, I was completely alone.

Immediately from the car park (which can be muddy as it was when I did this hike the second time after a rain storm), the track started off wide and pretty open as it skirted the boundaries of a private farm.

For the most part, the track typically was shaded by trees on at least one side since it was practically at the edges of the Snug Tiers Nature Recreation Area.

Signs were set up at each fork or trail junction to keep hikers on the path and out of the private property.

After about 1.3km from the trailhead, I encountered a sign pointing to my right as the Pelverata Falls Track now started to leave the open fields of the farmlands and into the more fitting old growth forest of the Snug Tiers.

At that point, the trail narrowed even more with some slight overgrowth much of the way.

It was in this stretch that the area seemed like it was full of startled wallabies.

After all, I’d hear frantic rustlings in the thick bush upon my approach (they definitely knew about me coming long before I knew about the wallabies’ presence).

In any case, the well-shaded forest walk continued gently climbing for the next 1.5km or so.

Eventually, the track started to climb more steeply on rocky terrain while the Pelverata Creek was more audible and close by.

Thus, the hike became even more rugged as there would be dropoffs on one side and I’d never be completely certain about how stable the loose rocks were on the track.

It was also in this stretch of track that Slippery Falls started to come into view in the distance.

Given the rough nature of this part of the hike, it was easy to think that Slippery Falls was the Pelverata Falls, and then turn back prematurely.

So I kept persisting on the rocky part of the track as I even encountered one fairly non-trivial scramble where I had to climb a small rock face as the track was severely eroded.

There was an orange arrow put on a tree up above that assured me that I was not only going the right way, but it provided the hint I needed to know where to go next.

Beyond the orange arrow, the views of Slippery Falls continued to improve.

Shortly after that, the track then started descending steeply just as I was starting to hear the sounds of falling water from Pelverata Creek.

After about 125m of the steep descent, I reached the familiar lookout platform with the view up towards the Pelverata Falls.

I was told that it was possible to continue the descent towards Pelverata Creek, but I didn’t bother as the sanctioned track was already rough enough.

In any case, the lookout platform allowed me to better appreciate the cliffs supporting the tall waterfall, but I was also too far up the gorge to see Slippery Falls anymore.

Since the falls was facing west, it might be better seen in the afternoon if it was sunny.

However, since I came early enough in the morning on each of my visits, the sun either didn’t penetrate through clouds or it still hadn’t breached high cliffs flanking the falls.

After having my fill of the Pelverata Falls, I then climbed back up to the rocky part of the track.

After some tricky scrambling past the rock obstacles by the orange arrow, the rest of the hike was a straightforward downhill hike all the way back to the car park.

Pelverata Falls resided in the Huon Valley near Hobart, Tasmania. It is administered by the Huon Valley Council. For information or inquiries about the area as well as current conditions, visit their website or Facebook page.

To drive to Pelverata Falls, I’ll describe a couple of routes from Hobart since that was how I did it.

From the Hobart CBD, I took Davey St west towards the Southern Outlet (A6).

After about 9.5km, I continued following the ramp for the A6 at the interchange (now the Huon Highway).

I then continued another 10km or so before leaving the Huon Highway for the Sandfly Rd (C622) on my left at Sandfly.

Then, less than 200m on Sandfly Rd, I then turned right onto Pelverata Rd.

I continued following narrow and winding Pelverata Rd for a little over 12km before I turned left onto the Crosswells Rd as directed by a Pelverata Falls sign at the turnoff.

This turnoff was roughly over 500m west of the town of Pelverata.

I then drove about 1km on Crosswells Rd before it terminated just before some gate private roads and driveways.

The car park and trailhead for the Pelverata Falls was on the left side of this dead-end against the trees.

The time it took me to do this drive was about 45 minutes.

For the more roundabout route from Hobart to Pelverata Falls that involved more highway driving, I’d follow Davey St west towards the Southern Outlet (A6) as before.

Then, I’d follow the A6 towards the Huon Highway and continue on the A6 all the way to Huonville (about 37km from Hobart).

Just before the bridge over the Huon River, I’d turn left onto the Channel Hwy (B68) and take that for a little over 5km to the turnoff for Pelverata Rd on the left at Woodstock.

Once on the Pelverata Rd, I’d drive another 8km east towards the Crosswells Rd, where I’d drive the remaining kilometre to the trailhead.

Note that for much of the 8km stretch between Woodstock and Pelverata, the Pelverata Rd was unsealed.

In any case, the time it took for me to drive this route was about 60 minutes.


Looking towards the pastures near Pelverata in the distance before briefly checking out the trail obstacle with the orange arrow, then finishing off with a zoom-in on the Slippery Falls 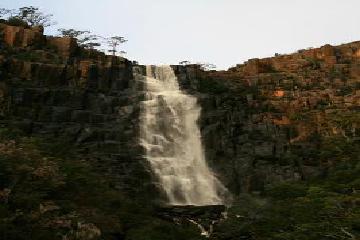 Pelverata and Snug Falls May 2, 2016 11:58 pm by Caedence Kuepper - A couple of pictures from Snug and Pelverata Falls in Tasmania after some good rain. Both falls were spectacular, especially Pelverata. I have visited both of these falls many times, but never with this much water flowing. ...Read More
Pelverata Falls in Trouble January 6, 2010 10:20 pm by Aradia - They are beautiful but Gunns want to log and clearfell around the falls and over the track - STOP THEM ...Read More