Ralphs Falls was a very tall but thin waterfall dropping 100m over a rugged cliff facing a wide open expanse of farmlands belonging to the community of Ringarooma.

We were able to take in the falls as well as the panorama from the so-called Norm’s Lookout.

We also could have done a longer loop walk that took in the Cashs Gorge and waterfall on the New River.

The unnamed creek that Ralphs Falls was on drained a catchment on the Mt Victoria Forest Reserve.

It seemed substantial enough to allow this waterfall to flow more or less reliably.

Of course, it would be more impressive with more water volume under heavier rainfall period, but that didn’t occur on either of our visits.

From the car park and shelter (see directions below), we took a short 600m track through myrtle rainforest.

The track was gently downhill throughout the forested stretch where moss-covered tree trunks and ferns dominated the scene.

We also spotted wiry waratahs in bloom as well as eccentric tiny worms hanging from their own silk threads.

After passing by a trail junction (where the other track connected with the rest of the Cashs Gorge Circuit), we arrived at the dead-end on Norm’s Lookout.

This yielded expansive views towards Ringarooma as well as the Ralphs Falls itself.

There was a dry creek to its right of the falls, which might support a companion waterfall under wetter times, but it didn’t flow in either of our visits here.

Changes to the Ralphs Falls Experience

In comparing our photos taken from our second visit and our first visit, it appeared that Norm’s Lookout was in a different spot than before.

We suspected that this was the case when it appeared that we had a more direct and full on view of Ralphs Falls back then.

Even some of the lower tiers of the falls were revealed on our prior visit in November 2006.

However, in our more recent photos, the bottom sections of the falls could not be seen.

Moreover, the signage for Norm’s Lookout was set on a rock before the lookout platform itself as opposed to on the fencing of the platform like before.

In addition, there was anecdotal evidence of storms causing damage to both the track and the lookout.

So all things considered, it may no longer be safe to get the full view of the falls like we were able to on our first visit (as shown above).

Overall, Julie and I did this 1.2km return track in between 20-40 minutes.

Had we devoted the time to extend our visit and do the Cashs Gorge, we would have added another 50 minutes to the overall time spent here.

Maybe next time, we’ll be sure to fully explore all that this place has to offer.

Ralphs Falls resides in the Ralphs Falls Reserve near St Helens, Tasmania. It is administered by the Tasmania Parks and Wildlife Service. For information or inquiries about the area as well as current conditions, visit their website.

Since the nearest city of reasonable distance to Ralphs Falls is Launceston, we’ll describe the driving directions from there.

We were also able to make a visit here from St Columba Falls as well as St Helens so we’ll describe those driving routes later in this section.

Driving from Launceston to Ralphs Falls

From the Launceston CBD, we’d head east onto the Tasman Highway (A3) for about 62km to the town of Scottsdale.

Note that the Sideling Lookout was about 48km along the A3 from Launceston.

Once in Scottsdale, we turned right to continue on the Tasman Highway (A3) and took it for another 20.5km to the Carisbrook Lane (C423) turnoff on the right.

After going onto C423, we continued another 8km to the small farming town of Ringarooma.

In the town, we kept straight on the C423 for the next 1.5km before leaving the road to go onto the New River Rd straight ahead (Mathinna Plains Rd was on the right).

After 4km, we then left the New River Rd to turn right and go onto the Forest Lodge Rd / Mt Victoria Rd (by this time, there were signs pointing the way to Ralphs Falls).

We followed this unsealed road for about 10.5km to the signed car park opposite a shelter on the left side.

Overall, this 106km drive took us under 2 hours to do.

Coming from St Columba Falls, we backtracked for about 1.6km, we then turned left and took the unsealed Forest Lodge Rd / Mt Victoria Rd for about 11km to the car park for Ralphs Falls on the right.

From St Helens, we’d drive the Tasman Highway (A3) for about 24km to Pyengana.

Then, we’d turn left onto the St Columba Falls Rd (C428) and drive for a little over 9km to the Forest Lodge Rd / Mt Victoria Rd on the right.

Then, we’d turn right onto the unsealed road and follow it to the car park after about 10.5km.

For some geographical context, Launceston was about 103km (over an hour drive) east of Devonport, 167km (over 2 hours drive) west of St Helens, and 201km (nearly 2.5 hours drive) north of Hobart. 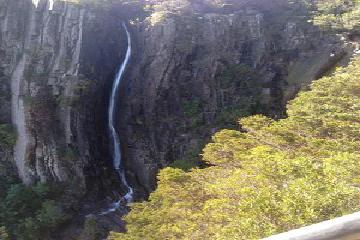 The Ralph’s Falls adventure April 19, 2015 1:18 am by Caedence Kuepper - This was one waterfall that I was very relieved to get to, especially seeing as just about everything seemed to be conspiring to keep us from reaching our destination. Let me explain why: We had originally planned on visiting these falls, and then visit St Columba Falls afterwords. We found the narrow turn-off road towards… ...Read More