About Russell Falls and Horseshoe Falls

Russell Falls could very well be our favourite waterfall in Tasmania.

It was certainly the best known and most popular waterfall that we had visited in the state.

In fact it had been said that it was often a contest between this waterfall and Liffey Falls for the title of Tasmania’s most beautiful waterfall.

That said, we tend to favour Russell Falls given our somewhat suboptimal experiences at Liffey Falls.

In any case, what made this waterfall stand out to us was its character.

As you can see from the photo immediately below, it actually consisted of two main drops.

However, it was the satisfyingly segmented and vertical appearance along with its size that really drew the camera clicks from us.

And it wasn’t only us, because we noticed that just about every other visitor who shared the experience at the Russell Falls did the same.

This waterfall was the centrepiece of Mt Field National Park, which was said to be Tasmania’s first national park.

It was also part of the greater Tasmanian Wilderness World Heritage Area which dominated much of the southern and western sections of the island state.

From the large car park (see directions below), we paid the national park fee at the visitor centre then proceeded behind the building.

As we left the building, we then went onto the short 1.4km (about 700m on the way there) well-developed loop track to the base of the falls.

On our first visit, we took the slightly shorter wheelchair accessible path on the left side of the loop.

On our second visit, the wheelchair path was closed for some trail work so we kept right, which was slightly longer.

Once at the main lookout at the base of the falls, I took advantage of the solid railings to take the long exposure photographs that most of the postcards would show of this falls.

After having our fill of the main lookout, we the proceeded onto the track climbing up to the top of Russell Falls.

Note that the main track bypassed the short spur path to an alternate overlook that was very overgrown and no longer sanctioned.

The rock-stepped track initially ascended a couple of switchbacks before it started ascending wooden steps.

These steps concealed the old unofficial but well-used track leading to the top of the lower drop.

That was where it was possible to be face-to-face with the hidden block-shaped Upper Falls after scrambling towards the middle of Russell Falls’ Creek.

However, given the amount of erosion and cliff-exposure on the way to the ledge between the two tiers of the falls, I could totally see why the authorities closed off this path.

As a matter of fact, the revegetation that was naturally occurring from the relative lack of foot traffic would further help stabilize the soil.

The steps continued to climb steeply as it eventually reached the very top of Russell Falls after nearly 300m from the lower lookout.

From this vantage point, we were able to enjoy the precipitous views over the top of the falls towards the treetops well below us.

Continuing further upstream for another 100m or so (going past a footbridge) led us to the shorter but wide Horseshoe Falls.

In case you’re wondering, the track that continued on the other side of the bridge over the creek went to the Tall Trees Walk in another 15 minutes.

It eventually went to the trailhead for Lady Barron Falls in another 50 minutes.

We have a separate writeup for the Lady Barron Falls since it was possible to drive up to a different car park for the Tall Trees Walk.

Doing the excursion that way would significantly reduce the amount of hiking.

That said, I thought it was certainly worthwhile to extend the current walk to take it all in and make it a solid half-day of walking before returning to the visitor centre.

Overall, Julie and I spent on the order of an hour to take in both the Horseshoe Falls and Russell Falls.

It might take half that time if we only did the base of Russell Falls before turning back.

Finally, given the photogenic nature of Russell Falls, we do have to mention that we actually showed up to the falls multiple times strictly for photography reasons.

We visited the falls twice during our first visit back in late November 2006 on a sunny afternoon.

Earlier that afternoon, there were shadows and high-contrast spots as a result of the sunlight.

So we actually had to come back later towards sunset when the shadows were long enough to keep all the lighting of the falls more or less uniform.

On a more recent visit in late November 2017, there was enough cloud cover to maintain even lighting.

That said, we showed up from mid-morning to around high noon, which might not have been the best times for photographing Russell Falls.

Russell Falls resides in the Mt Field National Park near Hobart, Tasmania. It is administered by the Tasmania Parks and Wildlife Service. For information or inquiries about the area as well as current conditions, visit their website.

We visited Russell Falls from a pair of approaches – one from Hobart and another via a long drive from Queenstown.

We’ll describe both routes starting with the shorter route from Hobart.

Driving from Hobart to Russell Falls

From the Hobart CBD, we drove the one-way Macquarie St (A6) then turned left onto Brooker Ave.

After a large roundabout, we kept straight (2nd exit) onto the Brooker Highway (Hwy 1) and continued along this highway for about 18km to its junction with the Lyell Highway (A10).

Just before the Brooker Hwy (Hwy 1) crossed the River Derwent, we left the highway to go onto the Lyell Highway (A10) and continued down this route for about 16km to New Norfolk.

Within the town, we left the Lyell Highway (A10) to continue west on the Glenora Rd (B62) starting at Montagu Street.

After another 18km or so on the Gordon River Rd (B61; crossing over a few railroad tracks en route), we then entered the town of National Park where we turned right onto the Lake Dobson Rd (C609).

The Mt Field Visitor Centre was at the car park to the right just after 600m.

Overall, this drive took us about 75 minutes.

Driving from Queenstown to Russell Falls

From Queenstown, we drove the Lyell Highway (A10) for about 178km to Ellendale Rd (C608) turnoff on the right.

We then followed the Ellendale Rd (C608) for about 23km before turning right onto the Gordon River Rd (B61).

Then, we followed this road towards National Park and eventually to the visitor centre as directed above.

That route took us around 3 hours to complete.


Fixated on the upper part of Russell Falls

If you have a waterfall story or write-up that you'd like to share, feel free to click the button below and fill out the form...
Tasmanian waterfall videos August 22, 2015 11:34 pm by Caedence Kuepper - Hi guys, just thought I'd share some links to three youtube videos I compiled from the waterfalls I've seen around Tasmania: ...Read More 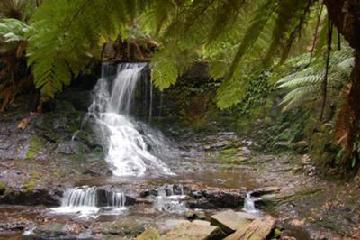 Looking beyond Russell (Russell Falls) August 3, 2008 9:53 am by Ian Smith - I wonder how many "Horseshoe Falls" there are in the world? I've certainly seen a few and here is another to add to your collection. Once you've admired Tasmania's most famous waterfall, Russell Falls, there's a track off to the right that takes you uphill. It ultimately goes to Lady Barron Falls but, en route… ...Read More