Sailors Falls was a convenient (almost roadside) waterfall situated in the Hepburn Regional Park just south of the historic town of Daylesford.

In our experiences, the falls would be most impressive during or immediately after significant rain storms would saturate Sailors Creek.

In some of the historical photos shown in the signage nearby, there could be twin waterfalls flowing side-by-side (as opposed to the singular drop you see above).

In any case, getting the view that you see pictured above only required a mere 150-200m walk towards the top of the steps leading down to the ravine carved out by Sailors Creek.

At the bottom of the descent, there was a bench and another lookout, but the view of the falls from down there was obstructed.

We learned after the fact that some of the locals in the know were able to cross Sailors Creek (as part of the Mineral Springs Walk) then scramble upstream towards the base of the main segment of Sailors Falls.

We didn’t do this on either of our visits, but we wished that we did.

Speaking of which, the first time we visited Sailors Falls was in November 2006, which was during the Great Australian Drought that lasted for the better part of the decade.

As a casualty of the drought, the falls was bone dry during that visit.

It wasn’t until 11 years later when we finally had the opportunity to witness the falls in a flowing state.

However, this had followed a rain storm that lasted for a couple of days prior to our arrival to Spa Country.

Prior to that storm, the Winter and Spring had been unusually dry, and the previous rains had occurred over a month before that latest storm.

So indeed, these observations further reinforced the notion that it was all about timing when it came to seeing this falls perform.

Finally, Sailors Creek was once the site of a gold rush in the 1850s.

Much of the surrounding timber was denuded to support the mining activities and the growth of neighboring settlements, including the town of Daylesford to the north.

These days, the mineral content of the waters in the region had been recognized as possessing healing qualities.

Therefore, the watercourses became protected in the name of spa tourism with the ancillary benefit of experiencing waterfalls such as this one.

Sailors Falls resides in the Hepburn Regional Park near Daylesford, Victoria. It is administered by Parks Victoria. For information or inquiries about the area as well as current conditions, visit their website.

Sailors Falls was near Daylesford so I’ll describe the driving directions from there.

From the roundabout connecting the A300 and the C138 in the heart of Daylesford, we took the C138 (Vincent St becoming Ballan-Daylesford Rd) south for about 6km.

By then, we encountered a signpost for Sailors Falls pointing to a car park on our left just before the junction with Telegraph Rd. 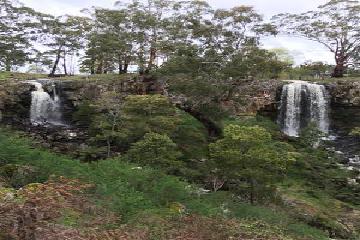 2016 Rains bring Sailors Falls Alive October 7, 2016 5:55 am by Leo Vredenbregt - I came out to fish the many small dams and reservoirs around the region and thus left my heavy camera gear at home. I stopped off at Sailors Falls on the way back to Melbourne and was delighted to see them in full flow. I say 'them' because there are actually two falls next to… ...Read More 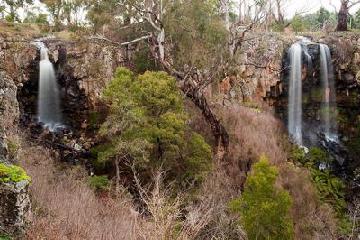 The Wet Season (Sailors Falls) October 20, 2010 7:08 pm by Aaron Nuffer - I visited Sailors Falls in August 2010, during a seasonal wet pattern. Both sides were flowing, with the western drop in a segmented form. ...Read More