Sheoak Falls was one of the few Great Ocean Road waterfalls that was very close to the Southern Ocean coast.

We had seen another one that could be called a coastal waterfall on the Great Ocean Road at Carisbrook Falls.

The difference with Sheoak Falls was that it happened to be in the Angahook-Lorne State Park (part of the Great Otway National Park) near the coastal town of Lorne.

Moreover, it required a little more hiking to reach.

Although the coastal scenery we were able to enjoy along the track was reason enough to come here, the 15m waterfall itself was also pretty satisfying.

Even on a trip where the Great Australian Drought adversely affected our waterfalling during our November 2006 visit, this waterfall still had a decent flow while leaving interesting foam patterns in its plunge pool.

On a follow-up visit in November 2017 when the drought wasn’t as much of a factor, the falls still looked almost as it did 11 years earlier!

From the well-signed car park (see directions below), we took a 1.3km (45 minutes return) track that initially started off with a fairly steep uphill to rise above the Great Ocean Road.

Then when the climb flattened out, we were able to look back at the gorgeous coastal scenery where the Great Ocean Road followed the coastline while the Southern Ocean continued to churn and nibble at the land.

The track then descended towards a wetland area flanking Sheoak Creek.

Once in the wetland area, the track then continued further inland.

At that point, the terrain shifted from a somewhat rocky valley with windswept shrubs into a more forested setting.

Even though the terrain here seemed to be more exposed to sunlight (i.e. it could be quite hot here as it was during a recent visit in November 2017), there was still quite a bit of dense and lush vegetation the further inland we went.

So apparently there was plenty of moisture in this coastal ecosystem to keep things green.

It certainly helped to offset the onslaught of brown from the dessicating coastal winds and salt that inevitably would come in from the coast.

Towards the back end of the wetland, the track then climbed before bypassing a junction.

We kept right to descend towards Sheoak Creek, but the path on the left was for a much longer walk that eventually led to the Sheoak Picnic Area.

Eventually at around 650m from the official car park, we made it to the Sheoak Falls.

This was where the Sheoak Creek tumbled over what appeared to be layers of hard rock stained grey from the constant moisture of the creek.

We weren’t sure if the waterfall’s flow was indicative of the norm thanks to the rain we were getting.

Or, if it was on the low side from the drought despite the rains (it had rained prior to our visit on both of our trips here in 2006 and 2017).

Whatever the case, as you can see from the photos on this page, we had a pleasing experience thanks in large part to its relatively healthy flow.

Re-routing of the Sheoak Falls Trail

Finally, it was worth mentioning that the first time we did this hike, we actually started from a pullout next to a large bend in the Great Ocean Road just 200m north of the turnoff for the official car park and trailhead.

That actually reduced our hiking distance to 1km round trip, but apparently over the years, Parks Victoria set up infrastructure to discourage going this route as they had replanted the area with the same kind of shrubbery that the rest of the wetlands had.

Even a guardrail was set up by the old pullout to make it less obvious to passing motorists.

So for all intents and purposes, I’d consider going that route forbidden, especially since the more sanctioned route had more to see anyways despite the up-and-down hill that was added to the route.

We didn’t attempt to do the long trail from the falls to the Sheoak Picnic Area.

While that track seemed to offer other attractions like the Swallow Cave, Castle Rock, and Scaw Fell, it was about a 7km one-way route.

That would have required a lot more time than we had available on both of our trips to this area.

Sheoak Falls resides in the Great Otway National Park near Lorne, Victoria. It is administered by Parks Victoria. For information or inquiries about the area as well as current conditions, visit their website.

Sheoak Falls is about 5.2km south along the Great Ocean Road (B100) from its intersection with Williams St (eventually Erskine Falls Rd) in the town of Lorne.

The car park was on the right (i.e. the inland side away from the ocean).

If the main car park was full, we also noticed there was another large pullout on the opposite side of the Great Ocean Road.

If parked there, due to the high speed of vehicles driving the Great Ocean Road, care must be taken to walk across the road and start the hike.

Since Julie and I visited the falls from Apollo Bay, we took the Great Ocean Road for about 40km east before finding the signposted car park for the falls on our left. 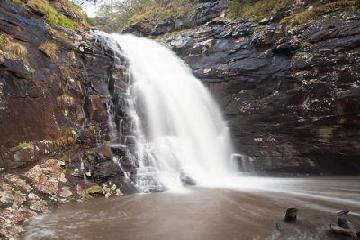