Snug Falls was one of the closer waterfalls to the city of Hobart that we encountered.

It was where the Snug River fell around 25-30m into a deep and lush gorge filled with low-lying ferns, fallen logs, and fallen rocks.

The river itself seemed to have had a dark tannin-like colour to it, which I’d imagine was infused from the soil of marshes further upstream.

Snug River’s flow made its way from the tarns and lakes of the Snug Tiers down to the protected waters of the North West Bay near the northern end of Bruny Island.

Even though the watercourse was a river by name, it was possible for the Snug Falls to dry up or be nothing more than a trickle during long spells without rain.

That said, on that second visit, we were lucky to have benefited from a couple of days of heavy rains that revived the falls after having been dry just prior to that storm.

In order to access Snug Falls, we took a walking track that started from a parking bay just off the unsealed Snug Falls Rd (see directions below).

We had to walk about 150m along the access road before getting to the actual start of the track.

Then, after getting by a rusted little turnstile, the track proceeded to make a fairly moderate descent over a dirt track with a few surprise ankle-twisting rocks and roots strewn throughout the walk.

The descent was on a fairly moderate to gentle grade flanked by tall trees and low ferns with some flowers in bloom amongst some of the taller bushes.

At roughly 800m from the trailhead, we reached a shelter with a little bench inside to perhaps wait out a rain (though that wasn’t the case in either of our visits).

Beyond the shed, the track descended some more as we encountered more fallen trees as well as some intriguing cliffs and mini-caves.

These formations hinted at the geological forces responsible for the formation of Snug Falls.

Eventually after about 1.4km from the turnstile, the track dropped right into the Snug River, which was full of slick boulders and rocks.

The rocks allowed us to carefully scramble to the middle of the watercourse for more direct views of the impressive waterfall right across the dark plunge pool.

Whilst enjoying Snug Falls from our bouldery vantage point, we noticed that there was an additional partially-hidden upper tier though we didn’t bother looking for a way to improve our view of it.

Anyways, after having our fill of the falls, we then backtracked the way we came so the return hike was all uphill making this a sweat-inducing upside-down hike.

Although the signage at the trailhead said it was a 2km (1 hour return) hike, according to my GPS logs, the hike was more like 2.8km round trip.

It was more like 3.1km round trip if you count the walk along the road, and we spent around 75-90 minutes away from the car.

Snug Falls resided in the Snug Tiers near Hobart, Tasmania. It is administered by the Kingborough Council. For information or inquiries about the area as well as current conditions, visit their website.

We accessed Snug Falls from Hobart so that’ll be the route I’m describing in this section.

From the Hobart CBD, I took Davey St west towards the Southern Outlet (A6).

After about 9.5km, I then took the ramp for the Channel Hwy (B86), which then continued for about 13km into the town of Snug.

Once in town, I then turned right onto the unsealed Snug Tiers Rd, which reached a fork after about 1.1km.

Keeping left to go onto the Snug Falls Rd, I then followed this unsealed road for the next 2.5km before reaching the signposted car park on the left.

Even though the actual trailhead was another 150m further along the road, there was no legal parking area there so I had to park the car here then walk the remaining distance to the trailhead.

Overall, it took me about 30 minutes to do this drive without traffic (40 minutes during rush hour when the kids were going to school).

A Huon Valley Escape to Snug Falls February 26, 2013 10:10 pm by Paul Dimmick - After staying overnight at Home Hill Beach House at Kingston Beach, take the short drive to the village of Snug. The road to the falls is signed. The bitumen runs out after about 3km so you need to be comfortable with gravel roads. From the car park it is another 500 meters walk to the… ...Read More 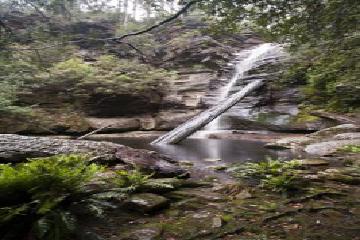 Snug Falls, 2009. November 15, 2010 11:02 pm by Sean Farrow - My girlfriend and I visited Snug in October of last year. It was a bit of a hike up through muddy and uneven ground, and it rained a lot. Keeping that much water off a 10mm super wide lens with a 77mm filter diameter is tricky at best. Lovely spot though, would highly recommend. ...Read More