Steavenson Falls had a lot of fanfare prior to our visit during a drought-stricken November 2006 trip to the southeast of Australia.

When we first saw it, we could totally see why even though it seemed like this falls had seen better days.

Despite coming in with expectations given its notoriety, the waterfall still didn’t disappoint us.

It possessed multiple tiers said to have a cumulative drop of 84m making it one of Victoria’s tallest waterfalls.

It was most certainly the main tourist draw of the town of Marysville, and it was said that over 100,000 visitors would come to the falls each year.

We wondered if part of its popularity had to do with its proximity to the city of Melbourne (probably about a couple of hours or so drive away).

Anyways, we have since come back to this waterfall in November 2017, and as you can see in the photo at the top of this page, it had a pretty substantial flow compared to the photo above (which was taken on our first time here in 2006).

The flow of the Steavenson River (even though it was limited during our first visit) seemed to be pretty reliable.

The river was said to have drained an area of about 16 square kilometres originating at the top of the Great Dividing Range.

The reliable flow of the river even enabled the presence of a floodlight illuminating the falls from dusk until 11pm each night.

The power to supply the floodlighting came from the force of water driving a turbine nearby.

Speaking of the walk, we were able to take the flat 350m track (700m round trip) to get right up to the Steavenson Falls.

At about 300m into the short walk, there was a lookout of most of the drop of Steavenson Falls right where three or four other spur tracks branched off.

The steep track going up the hill to the right was for the lookout at the top of the falls as well as the Keppel Lookout.

We did neither of these other lookouts, but apparently the latter was reachable by car from Marysville.

The track behind the lookout following along the Steavenson River went about 150m before reaching the turbine that powered the floodlight.

It was worth taking that detour on the return walk.

The two tracks leading the remaining 50m closer to the falls ended up at viewing areas at the base of the falls on either side of the Steavenson River.

From those vantage points right at the bottom of the falls, only the last 21m of the waterfall could be seen.

The remainder of the upper drops were hidden from view.

Thus, pictures really didn’t do this waterfall justice given its disjoint characteristic making the falls appear smaller than it really was.

In my mind, the best spot to view the entirety of the falls was from that lookout 300m from the car park.

Overall, Julie and I spent about 45 minutes at a very leisurely pace, which included all the picture taking and walking.

The name of the falls was said to have been derived from John Steavenson.

As the Victorian Assistant Commissioner of Roads and Bridges, he first set up operations at the site of the township that would eventually become Marysville in 1862.

The town had a recent infamous history due to the Black Saturday Bushfires in early 2009.

The largest of the fires (the worst in Australia’s recorded history to date) burned in the Marysville area as the Murrindindi Mill Fire, which destroyed most of the town.

Undoubtedly, the Great Australian Drought that lasted for most of the 2000s took its toll, and Black Saturday was the culmination of the prolonged climate anomaly.

We definitely noticed a difference in the activity and ambience of the town from our November 2006 visit and our follow-up visit in November 2017.

In the years since the Black Saturday Bushfires, I noticed large groves of burnt Mountain Ash trees surrounded by new green sproutlings and bushes along the slopes neighbouring the Steavenson Falls area.

Like with the firestorms in Yellowstone National Park in northwestern Wyoming, fires were a natural part of the life-and-death cycle of the forest.

It appeared that in the case of Marysville and the Steavenson River drainage, the recovery was already well in progress.

Steavenson Falls resides in Marysville, Victoria. It is administered by the Murrindindi Shire Council. For information or inquiries about the area as well as current conditions, visit their website.

Steavenson Falls was a pretty straightforward drive (there were lots of signs pointing the way) from the town of Marysville about 100km (under 2 hours drive) northeast from Melbourne.

We’ll pick up the driving directions as if you’re coming from the big city.

From the Melbourne CBD, I’d find my way north onto the start of the Maroondah Highway (Hwy 34) nearby the University of Melbourne and the Melbourne Museum around the corner of Elgin St and Rathdowne St.

Then head east on the Maroondah Highway (Hwy 34).

If pressed for time or can’t be bothered being mired in traffic, then it might be worth finding the way to Alexandra Parade further north or to Hoddle Street further to the east.

Both streets have access to the M3 EastLink Tollway.

Eventually, the EastLink Tollway (M3) exits with the Maroondah Highway (still Hwy 34) at the suburb of Ringwood.

The Maroondah Highway became the B300 Highway beyond the suburb of Lilydale.

At around 5km or so northeast of Lilydale, I’d take the B360 fork on the right to continue on the Maroondah Highway.

After about 41km, the B360 intersected with the C507 at Narbethong.

Continuing straight at this junction (leaving the Maroondah Highway), I’d then drive about 9km on the Marysville Rd into the town of Marysville.

Then, I’d turn right onto Pack Rd (which was before the Marysville Visitor Centre) before making a quick left onto Falls Rd.

Falls Rd ended about 3.6km later at the car park for Steavenson Falls.

This was a pay-and-display car park though the machine only took coins (so make sure to bring some spare change with you).

Overall, this drive would take on the order of 2 hours depending on the amount of traffic in Melbourne as well as the number of traffic light stops in its northeastern suburbs. 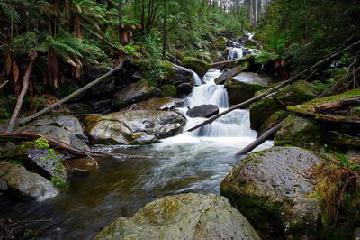 Finally recovering after the 2009 fires June 18, 2015 4:22 am by Sean Farrow - I return yearly to the Marysville area in the Yarra Ranges to photograph various waterfalls. The area is finally recovering from the 2009 Black Saturday bushfires. This trip consisted of a visit to The Beeches and Taggerty Cascades further upstream, and a visit to Steavenson Falls on the way out of town. I find Steavenson… ...Read More 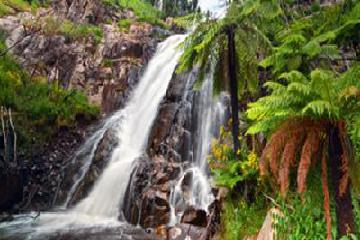 2 Years Later February 12, 2011 1:04 am by Sean Farrow - I visited Steavensons Falls on a recent photography excursion to the Marysville area in Jan 2011. Last time I was up this way the falls were closed to the public due to fire damage and the inherent dangers. Now they're open, but lack some of the ferny green grandeur that they once had. ...Read More